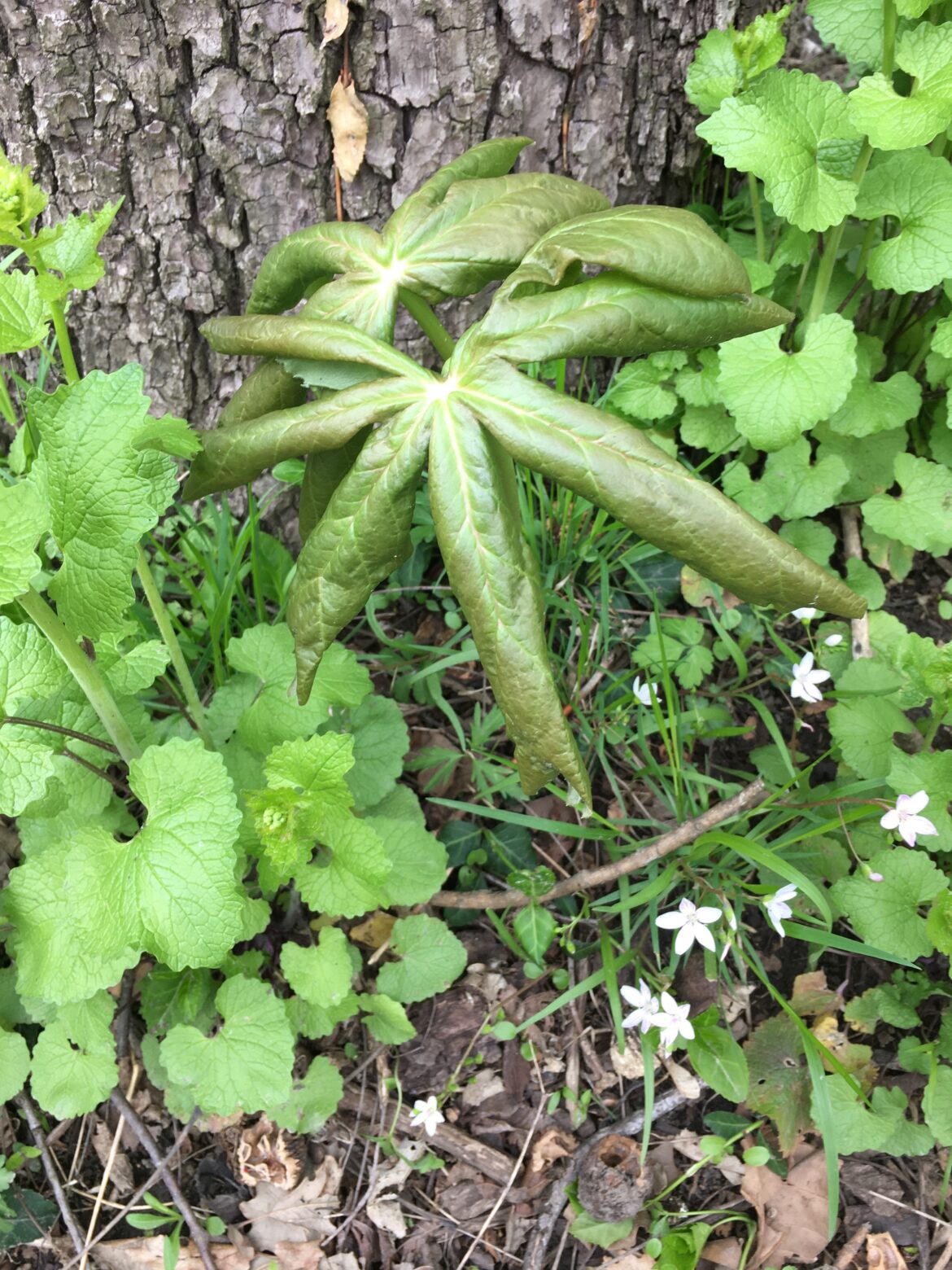 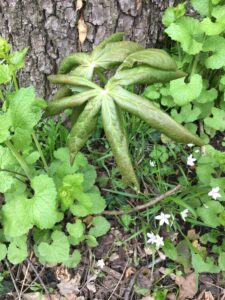 I had no inclination to read or to write, but only to spend the hours looking upon the earth’s April beauty, so lavishly spread before me here, listening to the field sparrow’s song, and smelling the fragrances of the leaves, the musk of the turned soil, the delicate perfume of the pasqueflowers, spending the hours in the sure knowledge that none would ever come again.

Highs in the 70s occur 20 percent of the time; 60s come 30 percent, 50s are recorded 30 percent, and 40s fifteen percent, 30s or 20s five percent. The sky is often overcast, with two April 15ths out of three showing no sun at all. Even though precipitation falls six days in a decade on this date, making the period of April 14th- 15th the wettest days of the month, today also marks the close of the rainiest part of April in an average year.

The chances of a high above 50 degrees are 85 percent on almost every day during April’s third quarter, and temperatures above 60 come at least half the time. Cold 20s are rare (just a five percent chance on the 17th and 18th), but frost still strikes an average of one night in four. Beginning on the 20th, the chances of an afternoon high in the 70s or 80s jumps from an average of 25 percent way up to 45 percent.

Rain or snow falls an average of 35 percent of the time this week of the year, the today, 15th, being the wettest day of all – carrying a 45 percent chance of rain and an additional 20 percent chance of snow.  Beginning on the 16th of the month, a major increase in the average daily amount of sunlight takes place: a rise from early April’s 50/50 chance of sun or clouds up to a brighter 70 percent chance of clear to partly cloudy conditions.

In cooler years, this is usually apple blossom week along the 40th Parallel, and redbud week, and dogwood week. By this time of the season, honeysuckles and spice bushes have developed enough to turn the undergrowth pale green, and color rises throughout the tall tree line. Pheasants nest, and bird migrations peak with the arrival of whip-poor-wills, red-headed woodpeckers, catbirds, cedar waxwings, yellow-throated vireos, meadow larks, indigo buntings, scarlet tanagers, Baltimore orioles, cowbirds, kingbirds, and more than a dozen varieties of warblers.

1981: First pie cherry blossom in the side yard this morning.

1983: First winter cress just past Clifton Road. Field peppergrass, too. Village tulips full bloom. All the uncut grass in the lawn is heading.

1988: The first cherry opens, at the same time the ginkgo, poplar, and sweet gum buds get read to leaf, and the redbuds brighten. Frog or toad eggs reported from Mrs. Bletzinger’s pond (about five miles west of town).

1989: First yellow flowers on the holly bushes in King’s Yard. First leaves on the hobblebush at Grinnell swamp. Some garlic mustard heading up. Early cherries open in town. Peonies budding. Comfrey leaves nine inches long, hops a foot to a foot and a half. Cornus mas done blooming, and leafing forsythia drops its flowers.

1996: While I was in Barnesville over the weekend, the crocus season abruptly ended here in Yellow Springs. The cherry tree garden is empty now. But daffodils are in full bloom, and squills still offer blue. On the way to school, I saw that the swamp cowslip in South Glen had opened. In Fairborn, the first pears were starting to flower. At home, box elders were starting to bloom. All around the town, a major leafing has begun: honeysuckles, lilacs, mock orange, Japanese honeysuckles. The garlic is high now, equal to the daffodil foliage. Japanese knotweed is about three to six inches.

2000: A few tadpoles have left their eggs. Money plant full bloom. Snakes hunt the pond. Now more apples are blooming, more redbuds. Most of the daffodils flowering are the white, later varieties. The tree line is still predominantly gray-brown, but there are prominent patches of pale green, and the undergrowth has filled in. Clear bell calls of the blue jays off and on through the days. This is the high tide of Middle Spring, the fulcrum on which the next season turns. In the next six weeks, all the leaves push out and the world becomes solid with foliage, the ground covered with crops.

2003: Pushed by this warm April, lilacs came in today, both the white and the purple. A few purple azalea bushes seen in town, but ours in the east garden are still just budding. Forsythia is still bright, but green leaves are filling in around the flowers. Tulips are full, daffodils beginning to deteriorate. In the south garden, coneflower leaves are an inch to two inches long. At the Covered Bridge, violet cress and toothwort have withered, but wild phlox, Jacob’s ladder, violets, and ragwort have taken their place. Between here and Washington Court House, 35 miles away, dandelions are everywhere.

2004: The first cabbage butterflies seen today. Weeding in the garden, I found the lilies-of-the-valley up about four inches.

2006: Cardinals first sang near 5:30. No screech owls heard for a while now. Drove to Dayton to look for porch stones, saw pears leafing, purple magnolias shedding, star magnolias gone, apples coming in, redbuds showing a lot of color – but not blooming yet, dandelions at their peak flowering everywhere. Pansies and primroses bought for the east garden.  The pussy willow catkins have all fallen to the front sidewalk along High Street. Bleeding hearts are prominent now, rhubarb is ready for pie, all the hydrangeas are pushing out, the bi-colored leaf hosta have well-developed leaves, fall stonecrop is bushy and four inches tall, the honeysuckle hedge around the yard is filling in, the pieris is in full bloom, the earlier daffodils fading, and mid-season tulips opening all at once. Against the north wall, the bamboo is coming up. This is a clear pivot time when early Middle Spring cedes quickly to the center of the season and the rate of change accelerates, the passage of time bursting from its February and March lethargy, rushing towards May and summer.

2008: Pears, star magnolias, pink magnolias are in full bloom in Wilmington. One plum completely open along High Street in Yellow Springs. More and more trees getting ready to flower, buds swelling. In the evening about 8:30, robins and doves singing steadily.

2011: The new cherry tree has a few blossoms this morning. A few buds are cracking on one crab apple in the park, and a few of our azalea buds are showing some color. Rhubarb has six-inch stalks, but it’s not ready for pie yet. Some garlic mustard heading up, and one sweet rocket plant with buds. I mowed the lawn today, cutting mostly to even out the wild onions. Robins continue to sing at dusk, but the grackles have pulled back in the past few days, and the song sparrow has stopped singing.

2012: Gethsemani to Yellow Springs, pushed by a strong south wind, temperatures in the 80s throughout the drive: Little change observed in Kentucky from the drive down on the 13th, but I noticed that the locust bloom had crept north about thirty miles beyond Cincinnati over the weekend and was moving quickly toward Dayton, accompanied by a parallel intensification of honeysuckle bloom. One patch of lush wisteria along the freeway near Centerville, garlic mustard full throughout the Miami Valley (but not noticed at all around the monastery grounds). At home: reports of tulips in Chicago and Portland, Oregon.

2013: Gethsemani: The robins are even earlier this morning than yesterday morning: 4:17 ! Home in Yellow Springs, the pears are in early bloom, and it is hard to distinguish the difference now between Kentucky and Ohio.

2015: More tulips coming in around the yard, Middle Spring deepening. Portions of the back honeysuckles gradually obscure the houses beyond. All the maples on High Street in bloom, and violets are coming in all around the yard. The first azure butterfly glimpsed in the yard. Monk the cat killed a dove fledgling this afternoon. In the cool evening, I transplanted New England asters and white boneset, dug the first rows of the annual bed.

2016: Yellow Springs to Gethsemani, Kentucky: Sun, no frost, the lawn ready to be mowed a second time, crab apples coming on Limestone Street: Along the highways south, the honeysuckle and silver olive hedges have gained in density these past days but still define the height of the foliage. Even though the trees are bare, though, the landscape is heavy with spring. Then approaching Louisville: it seems that the mood of the woods changes suddenly, the bright leaves rising above the honeysuckle. Into the country roads, the dramatic shift in season is obvious: sprawling patches of dandelions gone to seed, several Robin’s fleabane – one with violet petals, golden fields of cressleaf groundsel and winter cress, dogwoods in full bloom, redbuds in late bloom, tiger swallowtails, black swallowtails, webworms in their webs, simple, clear signs of passage from middle to Late Spring.

2017: Spain: Jill sends photos of tulips and creeping phlox, full Middle Spring. Similar here, but it seems that the fruit tree blossoms are not as abundant.

2018: Harold Wright reports that he saw his Mason bees “doing it” yesterday before the bitter cold front moved in. Chris Walker sent a photo of a fine rue anemone that was blooming in his woodlot.

2019: The red quince is now in full bloom. Leslie reports Carolina Chickadees feeding their nestlings. In response to my radio segment on the disappearance of insects: Nik Money writes from Oxford, Ohio: “Will, Thank you for your Almanack of April 9. There are very few flying insects in Oxford, Ohio so far. None in my garden at all, not a single pollinator, and depressingly few in Hueston Woods. I e-mailed an entomologist colleague in Cincinnati, who believes that native bees will emerge late this year. I hope he is right.

“As the days pass, I have been struck by the absence of activity around the magnolia flowers and as the redbuds begin to bloom this week I am watching in great expectation.”

2020: April cold wave: sun and almost frost, a sweet feel of the days that stay from ripening too quickly, the shining green of the grass and hedges preserved for now in the abeyance of May, scent of chillier times so many years ago, memories lost except for the formless hints of the air on my face. At the Indian Mound Park with Jill: the first garlic mustard plants were just open.

You may hold it as matter true and undoubted,

That he who lives the more hidden

And the more removed from the multitude