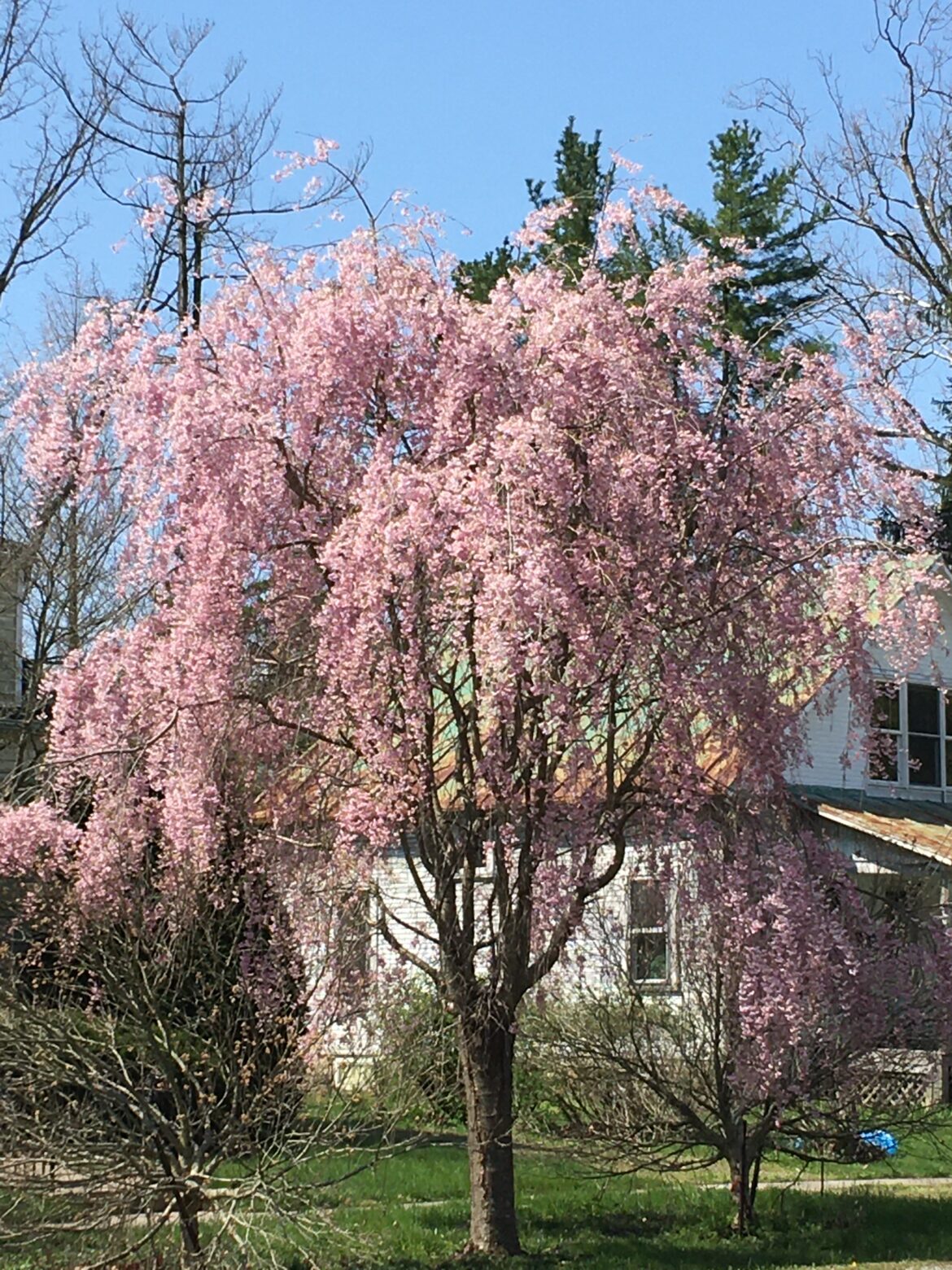 I will love you in the thyme-leafed speedwell, 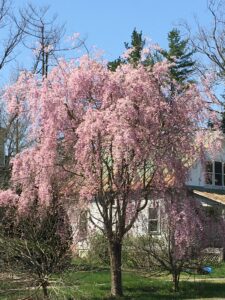 I will love you at the Ragweed Moon.

Highs reach into the 80s five percent of the time, into the 70s twenty-five percent, into the 60s fifteen percent, into the 50s forty percent, and into the 40s fifteen percent. Beginning today, a major increase in the average daily amount of sunlight starts to take place: a rise from early April’s 50/50 chance of sun or clouds up to a brighter and more spring-like 70 percent chance of clear to partly cloudy conditions. Snow rarely falls on April 16th, but rain comes 35 percent of the days. Frost strikes one morning out of every three on this date.

In the Northwest, Kestrel hawks are nesting, and aspens flower. Wood ticks follow the receding snow, and grizzly bears come out of hibernation. Sand hill cranes migrate through the western wetlands. In Vermont, trout fishing time begins. Croci are blooming in Minneapolis. Rhododendrons are open in St. Louis. Dogwoods are at their best throughout the South. Along the north Atlantic coast, mackerel move toward inshore waters.

1988: Small butterflies, the blues, are out. Dandelions everywhere.

1989: At the mill, down river, the first leaf is out on the lizard’s tail. The first wild phlox has bloomed, the first ragwort, the first wild geranium, the first grandiflorum. I saw the first bumble bee. The first cabbage butterflies are spiraling, mating. Pussy willows and forsythia are leafing. One strawberry plant has buds, quince is budding, winter cress is budding, first flower open on the cactus cress, bees working the peach flowers.

At Wilberforce, the star magnolias are gone, a few last petals holding. Doves nesting in the ginkgo outside my window. Cherry full bloom at home, sweet gum and tree of heaven starting to leaf. Celandine suddenly blooming. Hosta pacing the lily-of-the-valley at about three inches, similar spear of green. Ferns show color at the north wall. Some grape hyacinth are gone, others full. New growth on the pines is well underway.

1994: Bleeding hearts have gotten hearts in the past few days, and the clematis has leafed out. More tulips are opening, ten in all so far. Lupines strong, maybe five inches high. First ferns just barely starting to open in the west garden. Daffodils full bloom everywhere, and scilla, glory-of-the-snow, hyacinths.

1995: Yesterday the first strawberry flower was open. Red quince is in full bloom all over town. Fruit trees, star magnolias leafing. Cabbage butterflies spin through the north garden, carpenter bees are mating by the side of the house: lumbering, lurching unions.

1998: First celandine opens. First tadpole today. John reports from New York Mills, Minnesota: rhubarb is an inch high, the same as in early May other years. They are having an Early Spring like we are. Hostas leafing now here, ferns six inches to just emerging.

2003: Ticks reported in the Glen. Crab apples open in town, and the ancient apple in the back yard. Purple loosestrife stalks are a foot high. Peonies have small buds. Thin lily-of-the-valley foliage is at least six inches high. The first white bleeding heart has a half-inch heart, and water lily leaves have reached the surface of the pond.

2004: At South Glen, buckeye trees are well leafed and budding. The wildflowers have been preserved by the cool first two weeks of the month. Bloodroot and violet cress are still open. Some bluebells are only budding. Geese on the river were calling loudly, their heads moving back and forth.

2005: The very first robin chorus started at 5:00 a.m. this morning. Doves finally joined in at 5:17, and the cardinals sang consistently beginning at 5:25. Jeanie found the first tick at school near this date.

2007: First really bright yellow goldfinch eating at the feeder this afternoon, only a few signs of the molt left. Lilac buds and Korean lilac buds are limp, and most will not bloom this year. Clematis leaves noticed withered from the frost also. Jeanie saw a bright green beetle fly away along the Gorge path this afternoon, probably a six-spotted tiger beetle.

2008: More pink magnolias and plums blooming in town. All of the early yellow and orange tulips in the south garden are open. All of the daffodils are in full flower, only a few past their prime. Now the Asiatic and Oriental lilies are pushing up everywhere in the north garden, and the primroses have all unfolded – red, violet and yellow – under Janet’s redbud (which is well budded). On a ride to New Carlisle, I noticed a few large patches of dandelions. Seems like Middle Spring is finally coming in hard.

2011: In the rain, to Miamisburg, 30 miles southwest of Yellow Springs: The season has deepened there, redbuds starting to bloom, some pears losing petals, developing leaves. Russian  olive shrubs seen in bloom. Back in Yellow  Springs, serviceberries are losing petals, Zelcova leaves an inch long, buds formed. Tat says that a few daffodils have opened in Madison, but snow is in the forecast.

2012: While I was gone this past weekend, star of Bethlehem bloomed in the garden, and garlic mustard reached full flower. Now the ferns are tall and nearly all unfurled. The first few hyacinths, white and violet, are opening. The Korean lilac and the small blueberry bushes are in full bloom, and the red azalea in the dooryard has opened up completely, the honeysuckles are coming in more, and the red-leafed crab apple has lost its petals, the pink quince dropping its flowers through the day. Numerous small daddy longlegs found as I worked on the pond’s stonework; sometimes when I lifted up a rock, I would reveal five or six of the fledglings clinging to the irregularities in the stone.

2013: Inventory upon return to Yellow Springs after four days in Kentucky: So much has happened. Downtown, all the pears and serviceberry bushes have blossomed. The tulips that grow next to the south wall have opened. The lace vine, the Anna-Belle and the hobblebush hydrangeas and the pink quince have one-inch leaves. Bamboo is up an inch. Box elders and the red quince and the pink spirea bushes are flowering. Poppies and celandine are bushy and big. Lilacs are budded, a few with shades of purple. The leaves on some of the peonies, sixteen inches high, are open and developed. Early daffodils and squills and grape hyacinths are fading quickly. Mateo’s weigela is leafing. Waterleaf and lungwort are lush, hide the ground beneath their leaves.

The Lawsons’ black walnut tree has fat, dark red bud clusters. Maples in the neighborhood are setting seeds. Privets are packing the honeysuckles, slowly bringing privacy to our hedges. John Blakelock reported the first toad sang in his pond at 5:00 p.m. today.

2016: At Gethsemani: Cardinals singing at 4:55 this morning. From Goshen, Judy writes her northern Indiana update, her wildflowers just a little behind what is happening in and around Yellow Springs:

“Bill and I went wildflower hunting at Benton this afternoon.  The below-freezing temps of the last of March and first weeks of April resulted in some teeeny-tiiiny plants, I think.  The violets and yellow nodding trilliums looked stunted.  Everything else was pretty sturdy:  henbit (of course, nothing kills that, unfortunately); spring beauty, pink & white; bloodroot; early meadow rue; false rue anemone (carpets and carpets of the latter two), toad trillium and emerging may apples and giant trillium.  We saw a garter snake and a turtle sunning themselves and heard some small frogs gribbeting–nothing like the impressive bullfrogs that inhabit the ponds at DeFries Gardens out near New Paris.  I guess they respond to the sound of the cars on the speedway there.”

2018: Flurries and a cold wind throughout the day, another piece of this atypical April. The temperature, however, has allowed the daffodils to come in slowly and to remain in bloom longer, and all the crab apples at the Bill Duncan park are leafing.

2019: Bittercress is getting tall, stems quivering in the wind that sweeps across the cornfields at Ellis. At home, most hostas are a few inches tall now, and the sweet cherry tree is in full bloom with more blossoms than I can recall. Throughout town, lawns are purple with violets, deadnettle and ground ivy.

2020: Reading back over the past 40 years, I can see that the progress of this year is like that of last year, and not so different from that of April 16 of 1981. The Great Dandelion Bloom remains a constant; with it, Middle Spring with all its woodland flowers. The early daffodils are gone now, but so much remains the same. Of course Middle Spring is not one season but an interweaving of uncountable subseasons, some of which come early, some late.

Tomorrow may you love

if you have never loved before.

Tomorrow may the lover love again.

For spring is a new song.

Spring is the earth reborn.