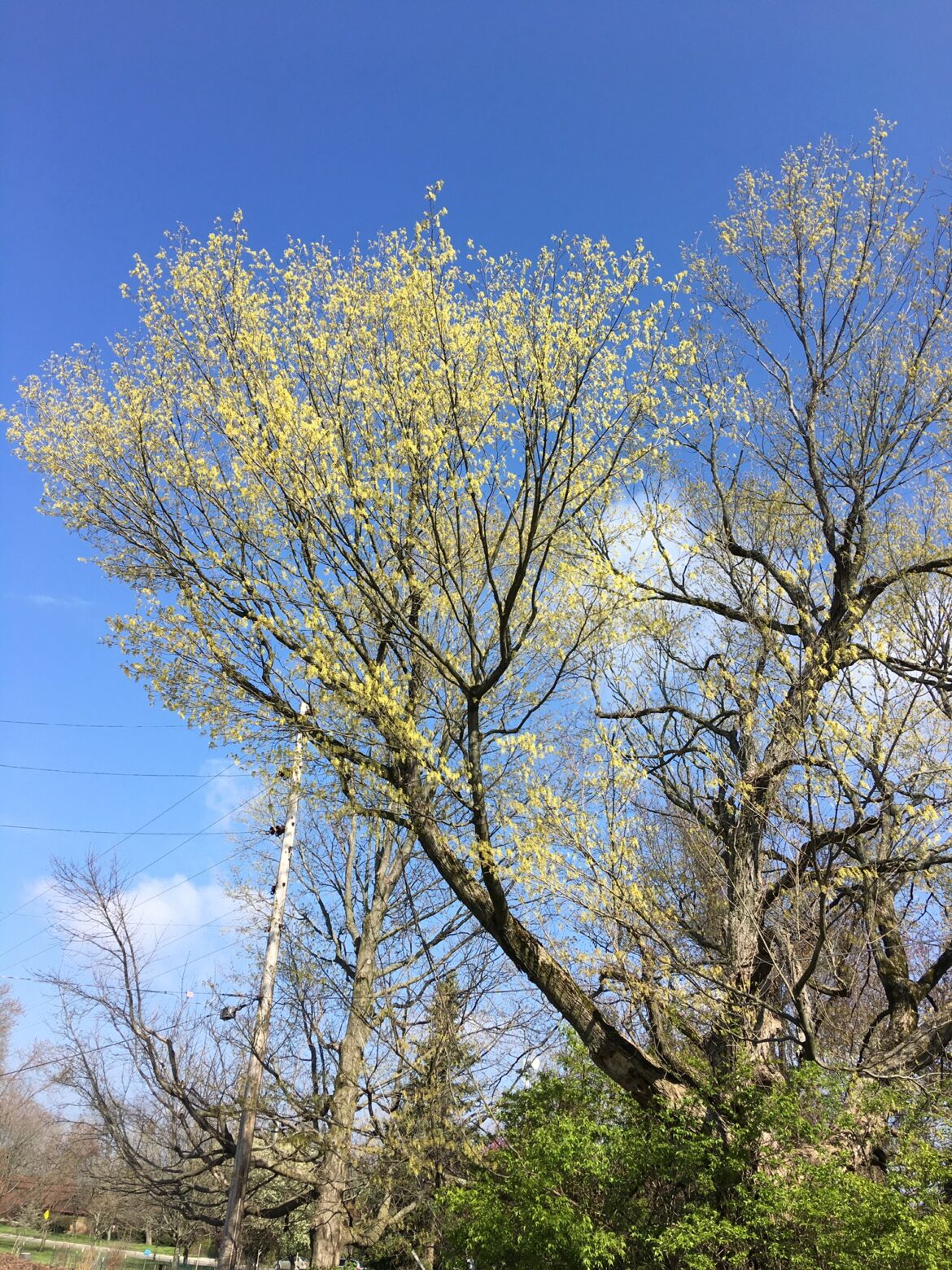 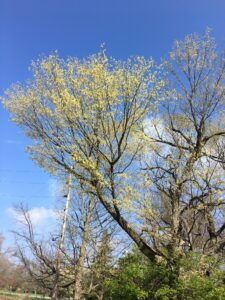 Spring hangs her infant blossoms on the trees,

Rocked in the cradle of the western breeze.

Now winter wheat, the pastures, and the lawns are the brightest of the year. Winter cress and violets turn some fields gold and purple. Bluebells nod on the hillsides. Bellwort, meadow rue, ragwort, columbine, white violet, small-flowered buttercup, large-flowered trillium, wood betony, miterwort, and Jack-in-the-pulpit are out. Forsythia flowers turn a darker gold and magnolia petals fall as locusts, mulberries, ash, tree of heaven, ginkgoes, Japanese honeysuckles, wild roses and virgin’s bower leaf out. Grub worms come to the surface of the lawn, and grasshoppers are born in the fields. Weevils appear in the alfalfa.

1983: Lily of the valley shoots are six inches high. At South Glen, snake sunning in the leaves at ten in the morning, temperature at 35 degrees.

1988: In the hills between the Covered Bridge and the Swinging Bridge, grasshoppers, only a few days old, swarmed across the path, clicking on the dry leaves. Phlox and ragwort, purple and gold, throughout the woods. One May apple budding. Great wide patches of chickweed now. A few hidden ginger plants are blooming, some meadow rue, the first bellwort, the first Jack-in-the pulpit, first thyme-leafed speedwell. First peonies budding. Forsythia half yellow, half green.

1991: Reading Thoreau’s journals the first time, I wanted him to tell more about himself. I thought all his notes on the thickness of ice at Walden Pond or about the dates the asters bloomed were frivolous. I wanted him to talk, just once, about his most secret passions. I wanted him to stop hiding behind nature. Then I started keeping my own notebook and found this history of the Yellow Springs year was more important to me than the other kinds of history I’d encountered. Starting from an old assumption that the course of the seasons can be a metaphor for the span of human life, I saw that the closer observation of that metaphor revealed parallels I hadn’t thought about before.  Each entry in the notebook, the times of cardinal song, the measurements of leaves, the dates of blossom and petal fall, not only contributed to a grand design, but gave me insights into all the minor, isolated actions, which I used to feel were meaningless in the cycle of my life. The more closely I looked at what was happening around me, the more detailed and myopic the notes became, the more I understood the extent of the metaphor, and the better I started to understand myself, my own passions, and Thoreau’s.

1992: Dandelions full bloom at Wilberforce. Parsnips two-feet tall, woods floor covered with waterleaf. The Early Spring garden is gone on the south side of the house. Wind flowers hold in the east garden.

1995: Box elders are flowering and leafing all over town now. The first blossoms are coming out on the cherry tree. Dandelions, violets, periwinkles are peaking together. The Antioch green along Corry Street is suddenly full of spring beauties. The seeds on the silver and red maples grow quickly, and now Lil’s maple and our maple are blooming.

2002: Dandelions, creeping phlox, violets, and spring beauties all at their best together. My maple and Lil’s are in full bloom.

2004: The bamboo has started to push out of the ground along the south wall, new stalks several inches high.

2006: Spring picks up more speed. The peonies have budded. The new euonymus leaves are almost as big as the old ones. The serviceberry trees have dropped their petals after only two days of bloom. Redbuds have suddenly opened. Yellow bellwort-like flowers blossoming at the corner of Dayton and High. Dogwoods, which had just cracked enough to reveal their flower buds, are opening here and there throughout town. Bamboo is shooting up, some stalks eight inches.

2007: The landscape trying to recover after the long cold spell. Tulips and dandelions are in full bloom all around Yellow Springs. The white birch near the apartments is leafing, and its catkins have emerged. The redbuds, burned all the way back, have fresh buds. At the Gorge, bluebells were unhurt, and the large-flowered trilliums have survived pretty well. Small-flowered buttercups are in full bloom, and bluets were open along the upper trail. Meadow rue, flowering at the end of March, had survived and was still in bloom. A few Dutchman’s britches and hepatica were holding on. I saw the first wild phlox open, and several ragwort plants were coming undone. In the woods, almost no trees appeared damaged, whereas in town, so many of the maples, trees of heaven, and the fruit trees suffered major setbacks.

2008: Don’s pink magnolia is just starting to open; a few petals are falling from the star magnolia across the street. Service berry buds are so fat. The box elder in the back yard is lush with the tassels of its bloom. Sweetgum has huge, fat buds. An orange question mark butterfly visited the circle garden this afternoon. Pears suddenly full bloom downtown, peach tree starting at home. Dandelions coming into bloom along the highway south. In Wilmington, leaves are joining the flowers on the pear trees, and the first redbud has blossoms. One Xenia redbud almost in bloom. At 8:40 this evening, robins were still chattering, and I saw bats for the first time this year.

2012: Some bamboo shoots are now over seven feet tall. In Beavercreek, fields and entire lawns full of dandelions go to seed. A few scattered apples in bloom, and the first rows of blue iris along Xenia Avenue. Yellow Springs locusts appear budded but not blooming yet.

2014: To South Glen: Dutchman’s britches and violet cress full bloom along the river, late full toothwort. Multiflora roses with leaf clusters like clover foliage. All but one bloodroot gone. Hemlock up to a foot and a half, parsnip half a foot. Budded ragwort and wild phlox (one phlox flower). One mint cluster, dusky and soft. Cowslip bright and dominant by the swamp across from the Covered Bridge. Two azure butterflies. In the yard, box elder flowering and leafing. Pears full in town, full magnolias and the more precocious hosta all burned by last night’s frost. Early blue-eyes. Lily-of-the –valley up to six inches, bamboo has appeared, two inches up now.

2015: Yellow Springs to Gethsemani: A warm summer-like day throughout the trip. Redbuds opening, red quince full bloom, daffodils, serviceberry, pears holding, Peggy’s peaches flowering, one crab apple with breaking buds. Full dandelions all the way to Cincinnati, then Lexington. The tree line greening , more and more as I went southwest. Full flower of crab apples, lilacs, redbuds (some shedding) and winter cress near Gethsemani, some pears leafing, and fields of dandelions gone to seed. Most trees blooming or leafing (sycamore leafing, but still holding last year’s seed balls, quince here full as in Yellow Springs, anemone and Jacob’s ladder in the woods, and two Jack-in-the-pulpits, May apples tall but not in bloom, water cress and ginger without flowers, peonies with buds almost an inch across, one cressleaf groundsel plant full bloom, two yellow sulfurs. Several bright green beetles on the paths. The dove nest above the entrance to the monastery was empty this year.

2016: Gethsemani, Kentucky: Sun and 80s: a four-petal “blue eyes” (with stem and leaves like ground ivy, and a five-petal stitchwort-like plant, several fleabanes, two cut over daisies. Tulip tree leaves are about a third developed. Foliage is starting on the upper branches of cypress trees. One sulfur butterfly and several field moths seen on my walk. Scott climbed Vineyard Knob this afternoon, and at the top, he came upon a huge and dense confluence of butterflies, all colors (especially yellow and black, most likely tiger swallowtails), he said, a great hatch that flew around him “like angels.” From Yellow Springs, Suzanne Patterson called to report that she had seen a red admiral butterfly near the Dharma Center gardens.

2017: Spain: Jill sends a photo of the north-side white viburnum and the deep pink apple blossoms all out, Here in Castelo among rolling hills and late Middle Spring, a definite change from before Tat and I reached Santiago de Compostela.

After five days in the city, I see the canopy foliage has thickened considerably, oak, maple and tulip tree leaves at least half size and grape vines becoming bushy with new growth. Brome grass common and orchard grass blossoming, Black medic and strawberries in bloom. A hemlock-like plant is opening, The low, five-pearled white flowers (petals divided in two) have been replaced by smaller, similar white flowers (but undivided petals) with tiny opposite leaves. Bright blue borage continues in the roadsides, but most of the ubiquitous yellow, thorny, pea-flowered shrubs – although still everywhere – have become brown, replaced by a tall plant with a similar flower but soft stems and feathery foliage.

Ferns, low and just starting to unravel two weeks ago, have grown up to line the roadsides, Bushy fennel is up to my knees. Campion still grows in the ditches. Several fat field thistles are about to open, Approaching Castelo, I saw dogwoods open for the first time and white jasmine in full flower, thickening the air with its fragrance, The small rusty petaled thyme-leafed speedwell noticed tucked into the grasses in one place.

2018: Cold and flurries once again, but weeping cherries are in bloom along Elm Street, daffodils and hyacinths and tulips upright, star magnolias still white. Forsythia flowers hold, and some bushes are even leafing. Yellow-blossomed crowfoot seen across from Mills Lawn School.

2019: Warm and steady wind under the full moon, round dark clouds rolling into the northeast, a few droplets from the approaching storm, tiny white serviceberry petals falling like the rain to come. Leslie reports a “huge QUEEN bumblebee.” She also says that her Carolina wren nestlings have feathers.

2020: Snowball viburnum and all the crab apples in the Bill Duncan Park are in bloom, common through the village. Lily of the valley shoots about six inches tall along Dayton Street. Don’s serviceberry trees have lost their petals now, his pie cherry holding. Near the Covered Bridge off Grinnell Road, the cowslip is still in flower.

There is a time when spring’s new leaves are just opened, the grasses are growing to their first tallness, violets- yellow and blue, — cowslips, crowfoots, woodruff, false Solomon’s seal are in bloom, the woods are dense against the evening sky, but not yet as dark as in Late Spring, the time when the evening air echoes with the songs and cries of warblers, thrushes, pewees, and the frogs, with the trilling of toads ringing through the twilight, the time when the evening air in the lowlands is a perfume none other in the year ever equals – the intoxicating perfume of the opening leaves, the essence of leaf and blade, of petal and bud, of ground and water.