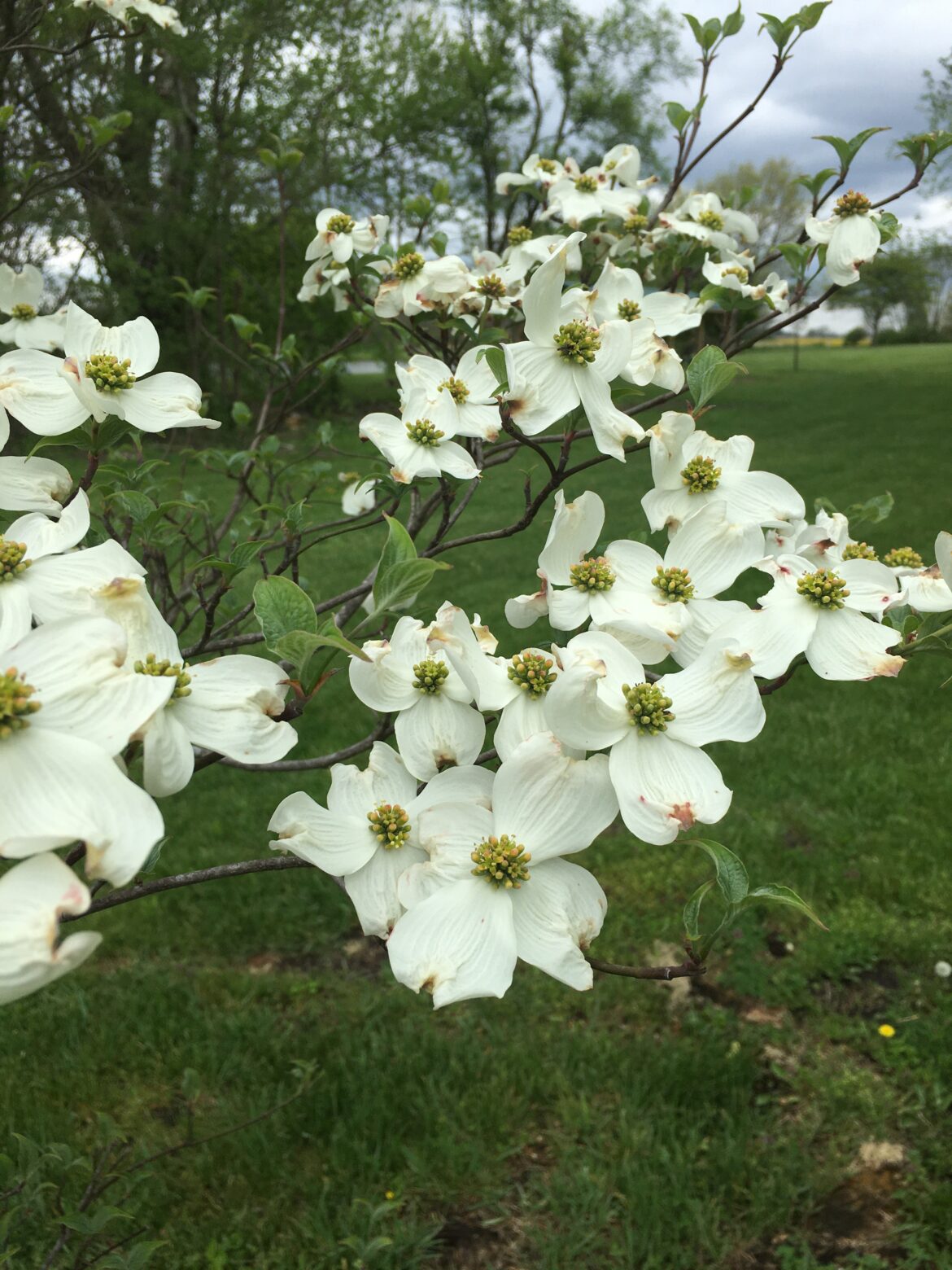 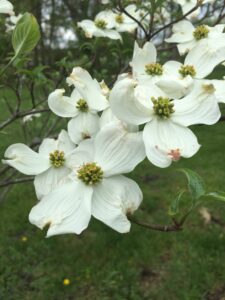 I cannot meet the Spring unmoved –

I feel the old desire –

A Hurry with a lingering mixed,

A Warrant to be fair.

With the arrival of the third major high pressure system of the month, the 15th of May often brings cooler temperatures than those days on either side of it. While a five percent chance of a high in the 90s exists, the possibility of 80s drops to just ten percent. Seventies occur 50 percent of the afternoons, 60s on 30 percent, 50s on ten percent. Rain can be expected an average of once every three years on this date, with completely overcast skies covering most of Lower Midwest more than 40 percent of the time.

High temperatures are usually above 60 degrees the week ahead, with the chances of 70s or better rising to 70 percent, a ten percent increase over last week’s chances. Cold in the 50s occurs rarely, but if it does appear, it is typically on the 21st and 24th. Chances of frost are low, but tender plants are in some danger after the passage of May’s fourth cold front on the 15th and fifth cold front on the 20th. The 18th, 19th, and 22nd are the wettest days in the period; the 20th and the 21st are the least likely to bring precipitation.

When azaleas lose their petals, daisies and the first clematis and the first cinquefoil open all the way, the first strawberry ripens, and the first swallowtail butterflies visit the late star of Bethlehem and bleeding hearts.  The last quince flowers fall, and lilacs decay.

The yellow heads of meadow goat’s beard appear along the roadsides next to the sweet clover foliage spreading out for June.  The pink and violet of sweet rockets replace the purple wild phlox in the woods and pastures.  All of the buttercups blossom, and by the end of the week, the first pyrethrums presage the poppies.  Horseradish and comfrey are budding.  The shy lesser stitchwort blooms in the alleys.

1982: Meadow goat’s beard is out. Evergreen growth is at least an inch on every branch.

1985: Hemlock is tall and blooming now. Near Antioch School, one wild lettuce plant and a Queen Anne’s lace are chest high, budding. Canadian thistles seem ready to open. Out in a field off Grinnell Road, the big nodding thistles are as tall as my waist. Japanese knotweed is over my head. Milkweed is two feet. In the village, iris, mock orange, and peonies are in full bloom.

1987: First poppy opens in the yard. Wisteria seen in bloom.

2002: Robin chatter continues through the day. First bud on the water lilies and water iris, first pollen spike too. Peak of iris, clematis, and coral bells at Park Meadows. Wheat is heading and turning pale on the way to Washington Court House. In the wet fields, bright vistas of cressleaf groundsel. Azaleas end in the east garden. Late hawthorns at the triangle park are in full bloom.

2004: One cardinal sang at 4:45 a.m., but the other cardinals waited until about 6:00. The red azaleas in the east garden fall quickly now. The first pale pink peony is unraveling slowly in the cool rain. Poison hemlock has come into full bloom.

2005: The very first mock orange and purple clematis blossoms opened today. The violet iris in the north garden and the catmint across from the Korean lilac have several blooms now. Sweet rockets opened yesterday along the fence.

2007: First new Dutch iris opened overnight. First locust blossoms seen on the way to Xenia and Dayton. Indian hyacinth at the end of its blooms. Long dry spell continues. Chives and allium continue at their peak. Baltimore oriole was singing in the back trees this morning, its partner sitting on the high branches of a rose of Sharon.  Toad lily planted.

2008: A wonderful green stability these days, the cool weather keeping the blue hyacinths, flax, Indian hyacinths, and the Korean lilac in bloom. The Dutch iris are fully budded, but a ways away from flowering. A few mock orange buds are stretching to open. Yellowing wild deadnettle at Katie’s in the alley.

2010: Roses coming in around the yard, red and yellow.

2012: Lace vine in bloom today as the iris and mock orange wind down throughout the village. Out in the countryside, thin-leafed waterleaf found in full bloom, a white campion, parsnips, and several golden Alexander plants in flower. One black swallowtail, one red admiral seen.

On the road to Goshen, Indiana: Silver olive flowers reappear about an hour north of Yellow Springs; bridal wreath seen full near Celina; apple trees gone in Van Wert; redbuds coming back near Fort Wayne; apples and lilacs coming back near Goshen, and patches of dandelions in full flower, along with patches all gone to seed; wheat a foot tall and bent in the wind.

2014: Ivano reports from Spoleto (Italy) that the merli (blackbird) fledglings have left the nest. Libby said she saw a firefly tonight.

2015: Mild in the upper 50s, no wind, barometer slowly dropping. I began running at 3:40 a.m., heard the very first robin at 4:11, the chorus starting a minute later, a cardinal joining in at 4:15 as I turned down High Street to head home. No crickets heard. When I walked downtown at noon, I saw the village in full iris, poppy, weigela (ours must have just bloomed overnight), and bridal-wreath spirea bloom, new peonies in some yards. Buckeyes were the size of a pea. One catmint plant was starting to flower. A scorpion fly noticed in the spiderwort yesterday. A white spotted skipper flew by as I was updating this information.

2017: Three yellow male tiger swallowtails seen this morning, one downtown, and two in the peonies at home. Parsnips are in flower on the way to Xenia. Peter said that his hummingbirds arrived late this year, the first male on May 7, the first female on May 12.

2018: Pale sugar maples seeds clustered on the tips of their branches, and fallen, too, onto Davis Street this morning, and then I found more maple seeds, many days old, on Limestone Street. Snowball viburnums full in Fairborn. I saw the first scorpion fly of the year along the overgrown west garden hostas and pachysandra.

2019: Osage branches show a little green now. The first large ants have appeared in the studio. For the first time, English plantain (Plantago lanceolata) is flowering along the path beyond Ellis. I saw a few more red clover blossoms, too. Jill’s first poppy bloomed today.

2020: Redbuds with red leaves. The maple canopy full along High Street. At Ellis, the grove of ash trees has turned pale, pubescent green, and the young dogwoods are holding their blossoms. From Keuka Lake in New York, Jill reports forsythia still in flower.

There is a time when spring’s new leaves are just opened, the grasses are growing to their first tallness, violets – yellow  and blue, cowslips, crowfoots, woodruff, false Solomon’s seal are in bloom, the woods are dense against the evening sky, but not yet as dark as in late spring….