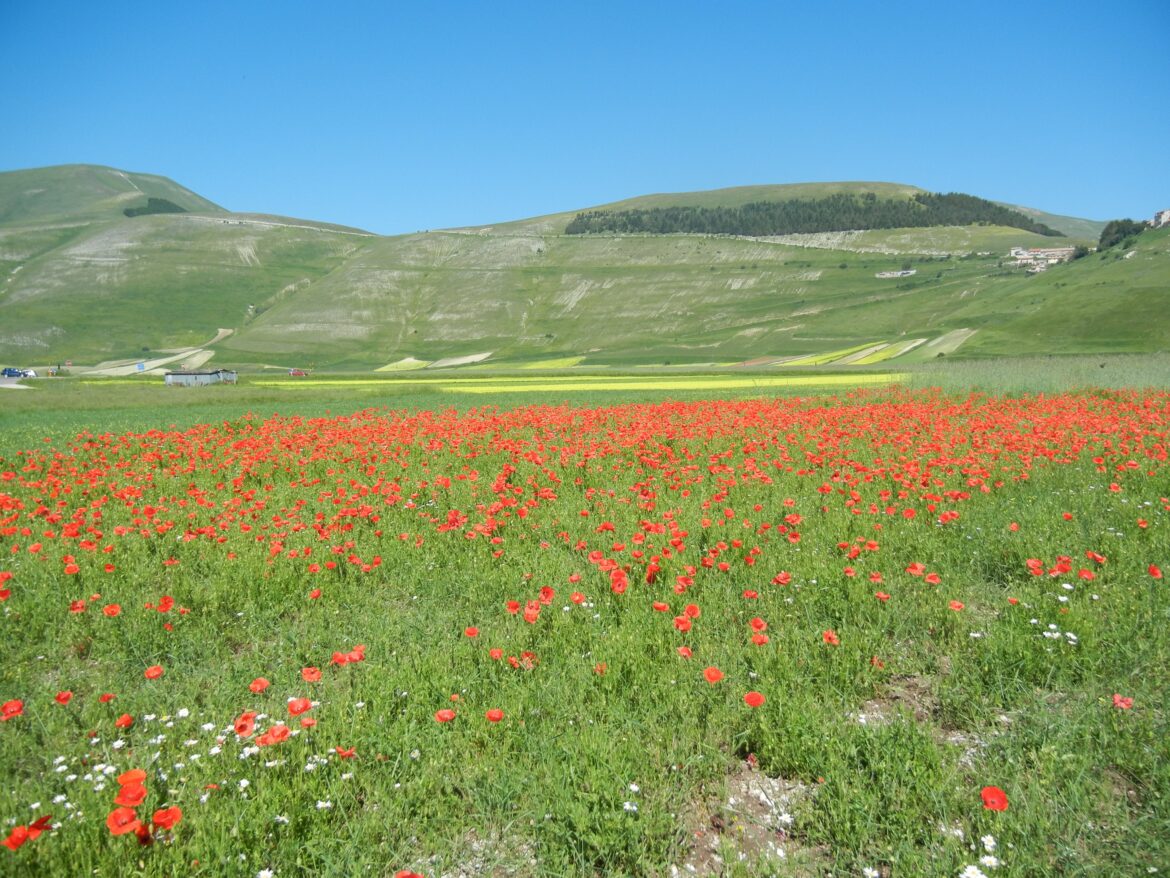 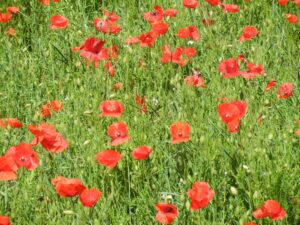 And left the flushed print of a poppy there.

A morning below 32 degrees, which could be expected at least one day in seven around the 4th of the month, can be expected only one day in 70 on May 16. Average highs stay in the 70s, and typical lows come into summer-like 60s for the first time since September. There is a 70 percent chance of a high above 70, and a 95 percent chance of a high above 60. The sun shines 85 percent of all the days. The chances of a shower are one in three. Wind is not uncommon today, as the fourth high pressure system of the month moves across the Lower Midwest.

The first June bug clings to the screen door when the first firefly glows in the lawn. Orchard grass and tall meadow rue is knee high now in the wetlands and fields, pacing the angelica. In the rivers, lizard’s tail has three leaves.  July’s wood nettle is a foot to two-feet tall. Deep red ginger has replaced the toad trillium close to the ground around the small open fingers of white sedum.

Cassiopeia has moved deep into the northern night sky behind Polaris, the north star, by this time of May, and Cepheus, which looks a little like a house lying on its side, is beginning to come around to the east of Polaris. When Cepheus is due east of the north star, then it will be the middle of July. When it lies due south of Polaris, then the leaves will be turning. When it lies due west of Polaris, it will be the middle of Deep Winter.

1984: Mill Habitat: First June bug. First ducklings seen on the river northeast of the mill. Then a few hundred yards farther upstream, a pair of geese with seven huge goslings swimming between them. A few bluebells left. May apple, rue anemone, phlox, watercress, ragwort, violets, spring beauties, geraniums, spring cress, crowfoot, catchweed, garlic mustard, Jack-in-the-pulpit in bloom. Redbuds and buckeyes still in bloom, yellow poplar budding. Grasses up to my knees. Buzzards in their tree at the bend of the river, wings outstretched to the sun. Sycamores have one-inch leaves, some oak leaves at about the same size. Canopy pubescent, half finished in a tantalizing middle season between spring and summer.

1987: First strawberries for breakfast after a morning walk by the Covered Bridge. I saw hundreds of suckers and giant carp swimming slowly up the Little Miami River. When I threw in my line, I caught a shiner, a chub, a sunfish, a bluegill and a rock bass, all very small.

1990: Locust and wisteria in full bloom, and all the grasses. Dogwoods almost completely gone. Waterleaf fills the woods floor, in bloom by today every year on record. First rhododendrons seen in town.

1991: Petals of the locust are falling today, the last wild cherry blossoms disappear: the beginning of the last days of Late Spring. The star of Bethlehem has just ended, garlic mustard at their final buds. The canopy has closed almost everywhere (with Osage, walnut, sycamore, a few oaks holding back). Red clover and blackberries full bloom, foxglove just starting.

1994: Spiderwort opens in the south garden. At South Glen, sweet Cicely and purple larkspur are in full bloom beside the last of the wild phlox and wild geraniums. In town, bridal wreath spirea is completely gone.

1995:  East to New York City: Now is the time for the grasses to dominate, and all the fields and fence rows are growing tall with brome and orchard grass and timothy. Yellow winter cress appears in the pastures from Yellow Springs into New York. At the lower elevations, the canopy is half complete, cottonwoods parallel to the gums, the ginkgoes, and the oaks. In the mountains above 1,800 feet, dogwoods and redbuds are still in full bloom (the redbuds have just leafed out in Yellow Springs), coltsfoot plants are marked with dandelion-like seed heads, and there is more gold in the tree line than in Yellow Springs. May apples seem just to have emerged, and fields of dandelions are still flowering near 2,000 feet. At Somerset, Pennsylvania, 2,300 feet on my altimeter, I saw white daffodils. A yellow swallowtail butterfly flew in front of the car there. At the peak elevations, near 2,500 feet, the high trees are almost bare, and it seems I’ve driven back into April. Descending the Appalachians, daisies appear in the roadsides coming into Harrisburg. In New Jersey, the wheat is turning a week or two before Greene County’s crop.

1996: Rain and flooding for weeks, the ground saturated, the garlic as tall as can be, rhubarb immense. Peonies have large buds. In the south garden, the first pyrethrum opened in a shower last night. Rockets and buttercups have been blooming for days, and the pale lavender hyacinths are just starting. In the east garden, the dwarf iris and columbine are coming in, the azaleas at their best. At Wilberforce, the dandelions were all going to seed yesterday. No farm planting has been done so far. In the Great Plains, the wheat crop has been destroyed by drought; here, the corn and soybean crops will suffer from a late start.

2001: First spiderwort opens. Wheat heading. Full bloom of water iris in the Grinnell wetlands. First June bug found hanging on the screen door when we got home from the symphony tonight at 10:45.

2004: The pale violet wood hyacinths are turning brown. The red azalea in the east garden is gone. The Dutch iris are coming in. The allium still holds tall and purple. Sweet rockets and sweet Williams now give color to the long north garden. The Korean lilac has peaked, its flowers collapsing all at once. Scorpion flies are suddenly everywhere this afternoon. Red and white clovers and yellow sweet clover are blooming by the side of the road. One nodding thistle is beginning to show pink near Byron.

2007: Last night, rain for the first time this May, a hard rain at first with thunder, then soft, lasting until near dawn. In the lawn, I noticed that white clover has followed the seeding of the dandelions. Bittersweet budded. Almost all of the wood hyacinths are gone now, but the golden ranunculus by the east side of the house are in full bloom. The garden mirrors what I noted here May 16 of 2004. Near the peach tree, the new Dutch iris continue to unravel: one blue and yellow, one pure yellow.

2008: Weigela in bloom in Wilmington and here.  Hawthorns stay white with flowers. The circle garden keeps all its blue and violet, the same as in 2005. Mock orange struggles to open, but the day remains in the 60s, still a little cold.

2011: Spoleto, Italy: Walk along the bike path near Pontebari: Thistles (Cardo mariano) are starting to flower here, a plant with wide leaves that have light, spreading veins. A plant very similar to poison hemlock is in late full bloom.

2012: June bug found while I was transplanting zinnias. On the way to Fairborn, coreopsis seen open. All along the roads, daisies and yellow sweet clover, full blooming parsnips and hemlock. Catalpas flowering in the city and country. In the garden, our yucca is well budded, stalk high. Liz writes: “I saw two male Baltimore orioles squabbling through air and tree in the Whitehall neighborhood today…what flashes of color!”

2015: At 9:20, a rainy wet evening, I went outside and I heard the rhythmic chrrr-chrrr of the Eastern gray tree frog (Hyla versicolor). No crickets heard yet this year.

2016: Light frost last night throughout the countryside, but no damage here in Yellow Springs. As this cold May continues: news that April was the warmest on record for the planet and that 2016 is forecast to be considerably warmer than last year.

2017: At the quarry habitat, tadpoles bask in the shallow pools, very few blooming plants, only wild daisies, some honeysuckles, dogbane waist high. In the afternoon, I completed the zinnia plantings, two plots: one maybe six by twenty, the other maybe twelve by twenty-five seeded around milkweed. Above me, wisteria flowers were disintegrating. Downtown, the Kentucky coffee trees have lost most of their blossoms. Along High Street, at the corner of Davis, blackberry bushes are in flower. Privet clusters are unraveling.

2019: Two silver-spotted skippers, a common buckeye butterfly, a red admiral and a sulphur seen today in the fields by Ellis Pond. White clover has opened overnight along my running path. The first spiderwort flowered in the north garden, and the first mock orange blossom from the struggling mock orange bush appeared by my studio window. More zinnias and dahlias planted. The news reports that this past April was the second-warmest on record.

2020: A trip to Erie, Pennsylvania (283 miles) to get Jill after she had an encounter with a deer that smashed her windshield. She was fine, but not the deer. I drove up in sun throughout the trip, watched the canopy thin to maybe half of that around Yellow Springs, and the return of the Great Dandelion bloom halfway through the trip. As I approached Cleveland, the roadsides filled with flowering crabs and cherries.

There she stopped to scent a peony:

My small glory, my flaxen head.

But there were many, blood and cream,

And solemnly she cupped each flower

And long within the fragrant petal silk

If she went by and did not take its gift.

Thus, slowly up and back the row

She walked, nor even missed the one,

Bird-broken, lying on the ground.

Quietly she took my hand to go

Then turned and said, “Good-bye.”

I cannot help but think she spoke

To things akin: with beauty meant

To gather up in one short hour, love

To last the days when flushing petals

First curl close about the heart,

Then softly break with dew-fall

“Judy” by her father, Robert Felker