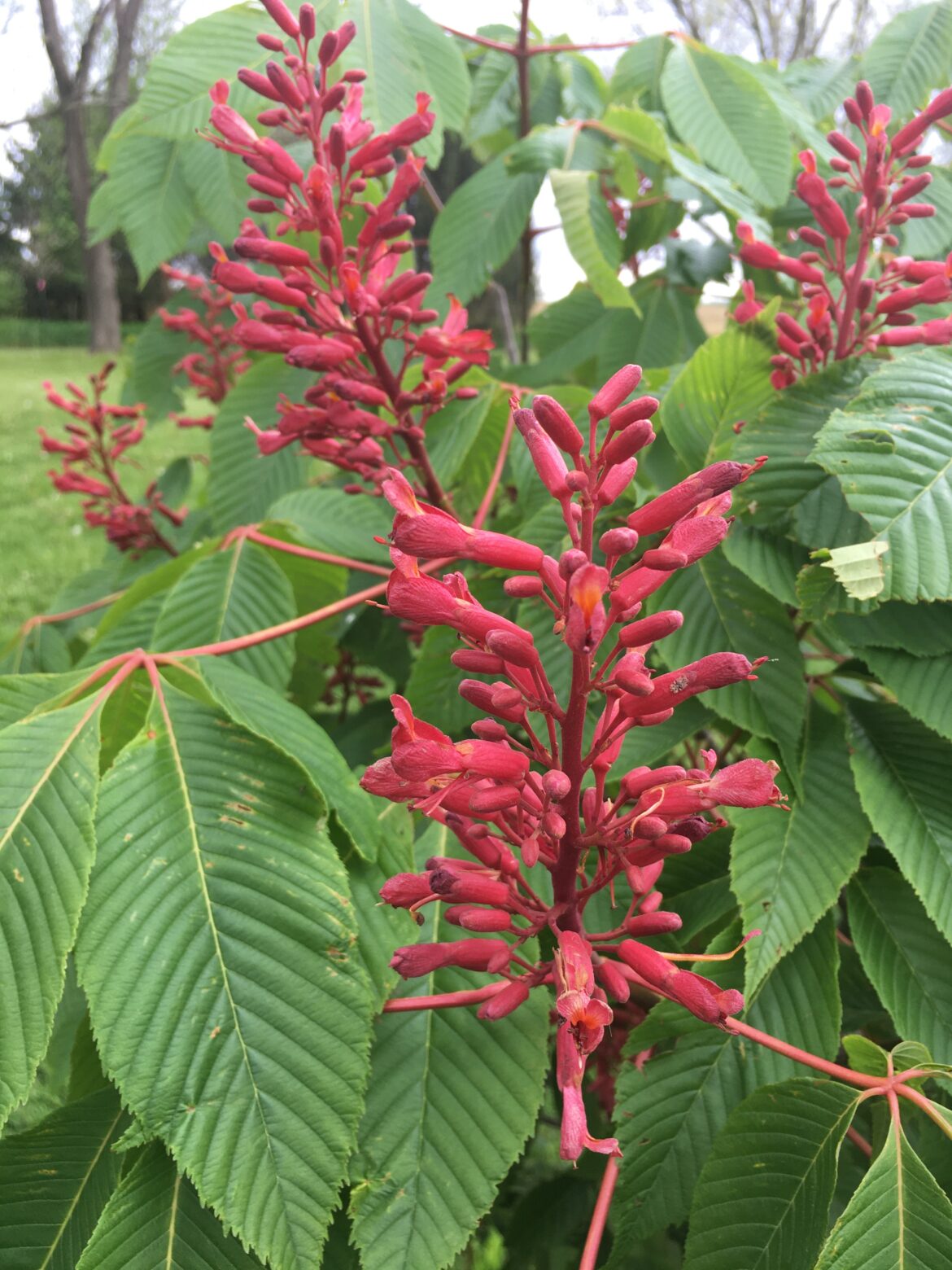 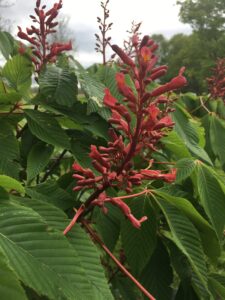 I cast them all away

Among the new mown hay,

Among the hushing of the corn

Where ill thoughts die and good are born

Out in the fields with God.

Highs in the 90s are rare on the 17th and 18th of May, but 80s occur 30 percent of the afternoons; 70s take place 40 percent of the time, and 60s twenty percent. Cold 50s take the remaining ten percent. Under the influence of the fourth high-pressure system of the month, skies are often partly cloudy to clear today, and there is only a 15 percent chance of completely overcast conditions. Rain showers occur one day in three.

The center of Late Spring is already closing the canopy. Sycamores, Osage, cottonwoods and oaks are leafing out, and white mulberries and buckeyes blossom. Along the sidewalks, iris, poppies, sweet William, and florescence of bridal wreath spirea and snowball viburnum have appeared. The delicate Korean lilacs take over from the fading standard lilac varieties, and bright rhododendrons replace the azaleas. Serviceberry trees have small green berries now. In the alleys, scarlet pimpernel comes in beside the thyme-leafed speedwell. Daisies unravel, and wood hyacinths and star of Bethlehem are at their best.

On most Midwestern farms, the corn is up and soybean planting is underway. Orchard grass is heading. A little alfalfa is budding. Red and white clover blossom in the pasture. In the garden, it is the center of pepper, tomato, bean, cantaloupe, and cucumber planting time.

1986: First firefly seen, but not glowing. Robins and blackbirds loud all day.

1987: First damselfly by the river, and first bite by a horsefly. Wild cherry, black walnut and locust still in full bloom, and the rest of the canopy complete. Some parsnips coming in by the roadsides. Angelica is past knee high, pacing the wood nettle. Orchard grass is excellent for chewing, will soon be past its prime and hard to pull. Dock flowering at Middle Prairie. A big red-horse sucker caught at Far Pool; it got off the line as I brought it to shore, eluded me, flopping in the grass, and then jumped back into the water.

1991: Lily-of-the-valley and bleeding heart seasons are over.

1992: Locust full bloom, mock orange holding, sweet rockets full. One young squirrel exploring, got stuck on top of the utility pole in the back yard, finally came down. Canopy near complete, cherries half formed. Blue jays and crows loud like they have been for the last two weeks. Poppies and iris, comfrey, and horseradish full bloom. Siberian iris full budding.

1993: First purple clematis, first red sweet William today. All the Siberian iris are budding. Buttercups, iris, and rockets full bloom. Quince gone. Wild onion heading. First yellow and black tiger swallowtail seen on Wilberforce-Clifton. At South Glen, waterleaf has tall violet flowers, all open. Twinleaf and toothwort and early meadow rue have their seed pods. Toad trillium is tattered and decaying. Jack-in-the-pulpit, wood nettle, touch-me-nots, and leafcup are all up to my thighs, the undergrowth surging up as the canopy closes in.

1994: Spanish scilla/blue wood hyacinth is in full bloom in the south garden today. The first daisy opens, first iris, first sweet William. Siberian iris budding. Poppies and peonies seen in Xenia. Along the river, the lizard’s tail is up about six to nine inches, three leaves on each plant. First red admiral butterfly seen along the south wall.

1995: The last clumps of creeping phlox have completed their bloom now. Their best time is April.

1996: Brief stop at the mill with Buttercup and Fergus, the bulldogs. I saw meadow goat’s beard and corn salad opening there, catchweed and wild geraniums full bloom, parsnips heading, wild phlox at their last. Foliage of ironweed and thin-leafed coneflower is up to my knees.

1998: First two red water lilies opened in the pond overnight. Across from them a lavender water hyacinth is flowering. Along the east fence, the first foxglove is open. At Antioch School, Jeanie saw the first yellow swallowtail of the year and a white spotted skipper. Out on the road in Greene County, the first yellow sweet clover seen. White clover is blooming in the grass. Hemlock is blossoming and the first parsnips. Some of the locusts are falling. Blue Siberian iris in the north garden are full now. A flea bit Jeanie when she was working in the yard.

2000: Up at 3:00 a.m. this morning, I listened for the whinny of the screech owl, but it didn’t come. Is that call only for late winter and early spring? Out in town, the yellow roses are in full bloom, have been for some time. Wild grapes open, perfection of iris, blue flags,  peonies, poppies. Sweet Cicely gone to seed. First water lily opens in the pond this afternoon.

2002: Sudden end to the wood hyacinths. Orchard grass was too tough to pull today, a pivot to summer. And the first of June’s gold-collared blackflies.

2003: First strawberries are ripe in the garden.

2004: The first purple spiderwort opened today. In the north garden, the white flowers of the lily-of-the-valley have started to brown, the Korean lilac rusting above it. In the triangle park, the Kousa dogwood blossoms have taken form.

2007: Mateo’s multiflora rose has started to come out. Blue eggshell noticed on the walk in front of the house. Hemlock blooming on the way to Dayton.

2008: To New Kensington, Pennsylvania, and return: Locusts and wild cherry trees blooming from here into western Pennsylvania.  Rhododendrons and azaleas and dogwoods and weigela full bloom throughout the area. Garlic mustard at about the same age as in Yellow Springs. White chestnut flowers seen.

2011: Italy: Into the mountains north of Spoleto to purchase cheese: At higher elevations, the canopy is suddenly thin, April green, luminescent. Dandelions and lilacs appear in full flower, and wisteria is in bloom. Forget-me-nots and buttercups throughout the lush hillsides, watercress in the streams. Iris is budding in the mountain gardens, open down in the city. At Vallo de Nera, catchweed and red clover seen in full bloom. First jasmine petals coming out in Spoleto.

Riding up into the mountains above the Spoleto valley, I can see the elevation show, within just a few miles, a month of seasonal difference taking me back to April in Yellow Springs as well as in Rome. `

The advanced state of the foliage in Spoleto accelerates Yellow Springs time ahead a month, and somewhere halfway up these mountains, central Italy and southwestern Ohio are almost in sync, elevation compensating for the position of the sun and continental climate differences. The many similar species and a sense of their trajectory from bloom to seeding tie together the 5,000 mile distance between Spoleto and Yellow Springs, reducing horizontal distance to seasonal time, and seasonal time to color and scent.

2012: Flower clusters fall from the Osage orange trees near the shed in the back yard. Dark mulberries have fallen to Dayton Street. Pie cherries ripening on Dayton Street and Stafford Street and High Street, too. Pink spirea open at the Lawsons’ and in front of Gerard’s, ours lagging behind. In the circle garden, the penstemon has opened, and the broad-leafed waterleaf along the west edge of the property.

2014: The hyacinths, the honeysuckles and the allium remain just past their prime now. The poppies have reached full bloom. My milkweed plant from Rick has grown fat and a foot tall. More spiderwort is coming in, including the pale ones at the west end of the garden. The last Virginia bluebells fall to the ground; beside them, the lungwort has lost its blossoms. The hostas cover so much now, seem to have reached their full spread. Most dogwoods are coming down, most lilacs gone.

2015: Running at five in the morning after rain, the air soft, and the sky light enough for me to see a parsnip budding, hemlock and cressleaf groundsel in bloom by the stream at Ellis Park, winter cress at the end of its flowering, garlic mustard almost gone, snow-on-the-mountain with bright umbels, dock heading up, orchard grass fully formed, and blue grass, black walnut blossoms covering the road under each leaning tree, honeysuckle flowers scattered from the rain, sycamore branches with small pale new leaves, the town gardens covered with hostas, and the canopy almost complete. In the circle garden at home, the allium and the wood hyacinths are finally browning and starting to be tattered. The old north garden of twenty years ago had blue flag iris and sweet Williams to fill in before lilies. And the circle garden then, of course, was only the apple tree with a few hosta around it. In Dayton, sow thistles in bloom, and trefoil has appeared along Dayton-Yellow Springs Road (and a boot-sized new gosling). Red flowered chestnut tree full at the Bergamo Center, a hawthorn with tiny berries.

2016: Another cold day in the 50s, but peonies noticed in flower along Elm Street across from the school playground, and the first blossoms of snow-on-the-mountain in the dooryard garden.

2017: All the zinnias planted yesterday with perfect daytime sun and mild night temperature in the 60s. In the back yard, the red peonies have come in now. Lack of yard maintenance, however, is getting out of hand: bushes, lawn, weeds, transplanting, landscaping. Honeysuckle flowers, all dark after pollination, fall to the sidewalk in front of the house, at the same time that the locust petals come down (spun and tumbled by the wind) and azalea petals are almost gone. Early spirea seen along Dayton Street, a few snow-on-the-mountain flowering here. Red oak acorns are twice the size of a BB in front of the Catholic church. Throughout the village: poppies and iris.

2018: All the zinnia, Mexican sunflower, hollyhock and dahlia seeds planted a week ago have sprouted.

2019: Rain after several mild and clear days. Honeysuckle flowers seemed to darken with age overnight and have started to fall. Black walnut catkins have come down onto Greene Street near Jill’s house. Poison ivy with giant leaves covering the old shed in the Stafford Street alley starting to bud. A catbird visited Jeanie’s river birch as I sat in the afternoon listening to the waterfall. Tonight near the college, the steady, cenobitic rhythm of tree frogs chanting.

2020: I found a June bug on my front screen door this morning.

Today, Father, this blue sky lauds you. The delicate green and orange flowers of the tulip poplar tree praise you. The distant blue hills praise you, together with the sweet-smelling air that is full of brilliant light.