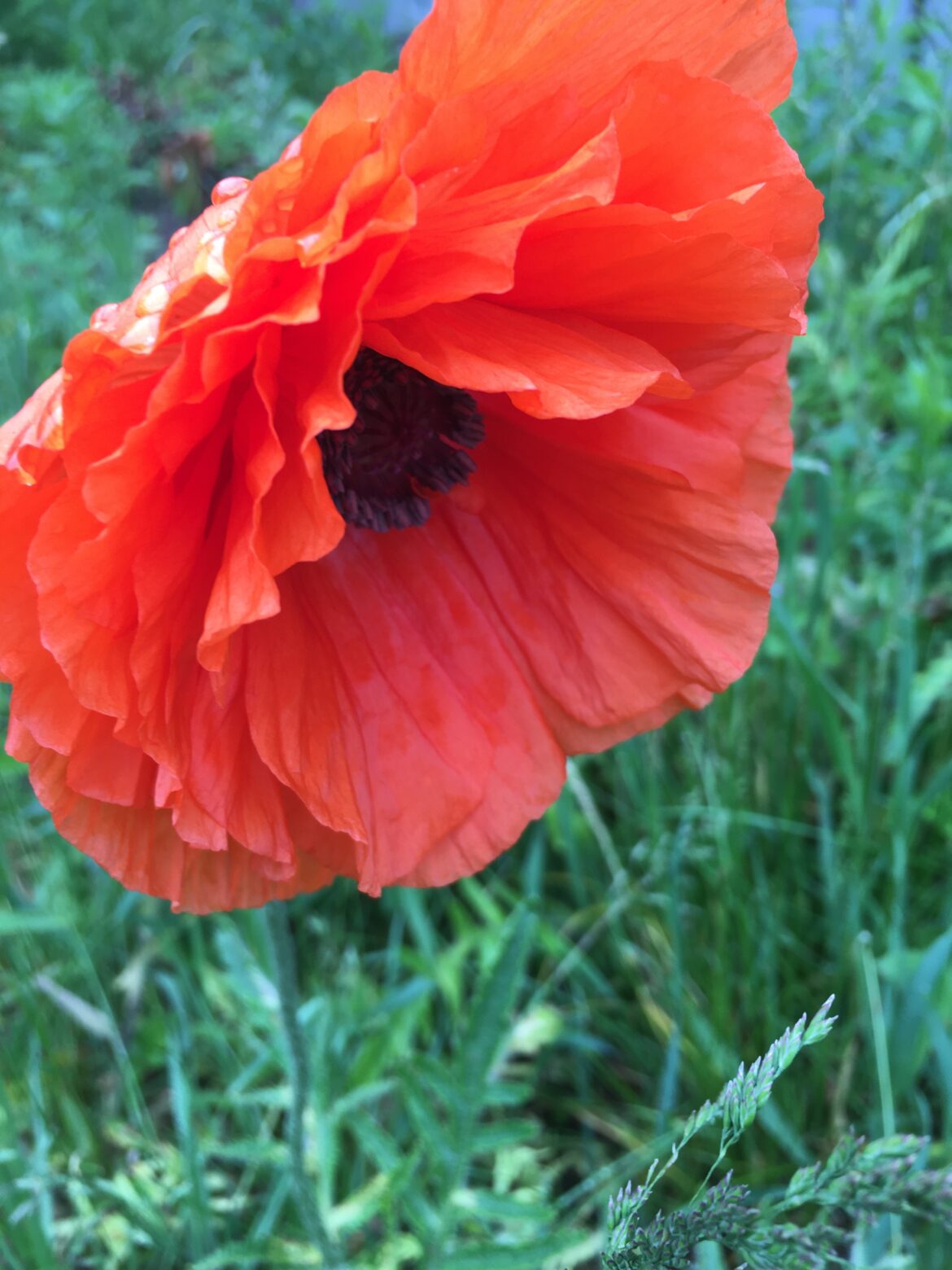 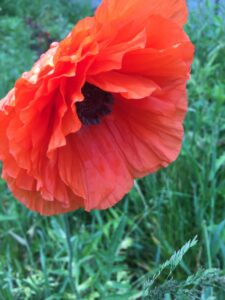 Resurgent May, softness with energy,

Warmth after cold, reunion after loss.

Pheasant, grouse, and turkey chicks appear along the fence rows. Half of the season’s new ducklings and goslings swim the creeks. Bullfrogs call all along the rivers. Catfish, bullheads, northern pike, bluegills, largemouth and smallmouth bass, white bass, spotted bass, striped bass and crappies spawn when the water temperature reaches about 65 degrees.

1984: On the way to Indiana, white chestnut flowers seen along the freeway, sweet clover foliage prominent but no blossoms yet.

1986: English plantain in bloom, probably began a week or so ago.

1987: Cardinal singing at 4:07 a.m.  Peaches one inch in diameter, apples half an inch, cherries maybe a third grown. Rhubarb blooms done, snowball viburnum and bridal wreath spirea fade. First peony opens (gone in the yard by the 30th of May).

1995: Mock orange and the first iris opened together today. Osage was beginning to leaf out. North to Norwalk: Lilacs were still in full bloom there, a hundred miles or so due north of Yellow Springs. The green of the tree line was less conspicuous. A few apples were still in bloom, fields of late dandelions still in bloom, some tulips and some oaks, redbuds all still flowering.  Ten to fifteen miles equaled a day of spring progress: Norwalk was back at the end of Yellow Springs April or the first week of May.

1997: First lupine is blue today. Honeysuckles coming in now. The Siberian iris put out buds two days ago. Mock orange still holding back. Dogwoods still keep their flowers. The first pink azalea petals fell. On the way to work, I almost hit the first monarch butterfly of the year! In the courtyard at Wilberforce, tall cressleaf groundsel in full bloom. At Jacoby, buckeye blossoms are aging. May apples in bloom, the last spring beauties, fading late yellow toad trilliums. Among the giant skunk cabbage leaves: water cress, spring cress, golden buttercups and ragwort full bloom in massive patches at the swamp. The canopy maybe a third complete. This is the finest of Jacoby, so bright. Up the ridge, purple waterleaf late full, a few purple violets, lots of purple phlox, toothwort foliage bleached pale yellow, new sweet rockets pink and violet. And a flock of crows above me screaming.

1999: It is full Early Summer, and I am ambivalent.  The air is heavy and sweet with the scent of honeysuckles, mock orange, and locusts.  Poppies, clematis, spiderwort, daisies, and the first roses are open.  Peonies have unraveled.  Lupines pace the iris.  Yellow poplars and catalpas are ready to bloom.  In the woods near my house, ragwort and watercress hold over from early May.  Sweet Cicely has replaced the wild geraniums.  Columbine, waterleaf, and parsnips are strong.  Wild grapes are blossoming.  Tall hemlock is budding.

This is what I wait for every year, the completion of the promises that began in January with the days lengthening and the cardinals starting to call.  My emotions always follow the seasons.  This week they tell me it is time for things to be coming together.  All of the delays of this long cold spring are over.  All the seeds purchased in February can be planted.  There is no chance of frost.  All of my expectations have materialized, and all of the projects saved for these warm afternoons are waiting.

Still, part of me balks at action.  I have heard the voice of self-sufficiency, the call to work, the call to build.  I have also heard a conflicting voice, one more ancient, that says it is time to enjoy each moment, to wander the paths of summer, to take things as they come.  It’s almost berry time.  The river is warm, the fish are biting, and the shade is cool.

On the one hand, summer calls my bluff.  It says: “This is what you’ve always wanted.  This is the top of the tide.  Life is short.  This June, these furrows, and these chances will never come again.  Redeem your April ambitions.” On the other hand, summer seduces me to a sensuous lethargy: “There is more time than you can ever imagine,” it tells me.  “The leaves will never fall.  June will never end.  There can be no true self-reliance without joy, without abandon.  The world is beautiful beyond your wildest winter longing.  Give in to its careless magic.  Lie in its arms.”

2002: Frost on the grass this morning, but the first of summer’s yellow sweet clover opened, and nodding thistle buds showed a little pink.

2005: The iris in the north garden is completely open. The first sweet William has flowered. Hemlock is six feet tall and budded. Rhododendron is starting. Asian ladybugs seen in the undergrowth.

2007: Mateo’s Jerusalem artichokes are past knee high now, and all the geraniums at Mrs. Timberlake’s are done blooming; her poppies are still strong. Meadow goat’s beard was opening in front of Don’s house. Mock orange still full bloom, honeysuckle flowers starting to fall.

2008: At South Glen, the canopy still very spotty. Rockets, honeysuckles, waterleaf and May apples are in full bloom. Meadow goat’s beard is open in the meadow where the old barn used to stand. Grasses, wood nettle, wingstem past knee high, hemlock shoulder high. A red-bellied woodpecker called once as I entered the woods, but I didn’t hear it afterwards. Two pairs of geese at the carp hole, but no goslings. The first scorpion fly seen in the north garden this morning, along with a lady bug. Comfrey, iris, hyacinths, rockets, spiderwort, snowball viburnum full flower; mock orange and sweet Williams gathering momentum. One overgrown purple clematis flower unfolding in among the forsythia. Peaches less than half an inch in diameter, maybe almost an inch long. In the alley, bridal wreath holds. The heavy scent of the Korean lilac lies sweet across the yard. Locusts in flower throughout the area.

2010: Osage flower clusters have fallen in the rain.

2012: A young skunk came to the back porch this morning around 6:15. Most of the blue flags are gone in the yard, but Peggy still has many. Many ninebark shrubs in bloom along Dayton-Yellow Springs Road now. This year is about three weeks ahead of 2008, but not so far from this date in 2010. The first tropical storm has formed in the Caribbean. And the last twelve months have been the warmest on record in the world. Certainly this May is shaping up to be way above average, maybe five to eight degrees.

2013: Aida called to report that both an American redstart and a yellow-rumped warbler had flown against her screen door, had been stunned from the impact, and, saved from the cat, flew off to continue their migration. The redstart is typically seen only during May and September in this area. The yellow-rumped warbler passes through the area from early April into middle May, returning in October, and Aida probably saw one of the last on its way north.

2014: To South Carolina: Milkweed two-feet high in southern Ohio. Canopy thinning in the mountains of West Virginia. Hemlock tall and starting to open near the Virginia border (Yellow Springs actually a few days ahead). Full rockets, early multiflora roses, purple vetch and poppies as we approached North Carolina. Moth mullein flowering at Columbia (and well advanced at Santee-Cooper). At Eutawville on the reservoir, full elderberries, catalpas, large magnolias, yuccas, daisy fleabane, sow thistles (tall, prickly alternate leaves), several ripe blackberries (the vines sprawling with the kudzu), and a new plant: five tiny violet petals, square rough stem, opposite, thin, rough, toothed leaves. Wild onions, some blooming, some all to seed. Corn is past knee-high, and wheat is pale tan, seems ready to harvest in North Carolina as well as at Santee Cooper. Black swallowtail, white spotted skipper seen at the canal. On the lake, fish were not biting for John and me, and we didn’t see any fish taken by other boats.

2015: Many purple flag iris in bloom throughout the village. In my east garden, the last wild geranium and azalea flowers fall. In the south garden, the first light pink peonies opened.  Spitbug noticed on a primrose plant. Milkweed plants two-feet tall, arrowhead six to nine inches, lizard’s tail to a foot. And I noticed that the purple bittersweet nightshade (Solanum dulcamara) was blooming in the old forsythia bushes at the southeast corner of the property. A nodding thistle showing some pink seen on the way to Dayton this afternoon.

2016: Walking through the village with Jill: Many purple flag iris, a locust tree in early bloom, many standard iris, catmint tall and in full purple flower, privets and lamb’s ear budding, forget-me-nots still common and strong, the high canopy almost filled in. In the dooryard garden, the wild geraniums are almost gone, and the snow-on-the-mountain is coming in, the rockets helping to replace the color lost as the pink azalea collapses. At the quarry yesterday evening, we wandered along paths that were bordered by dense hedges of honeysuckle, creamy white with blossoms. We saw tadpoles in the shallow pools and the first yellow sweet clover on the hill, creeping blackberry vines in bloom, and I dug a few wild daisies from the waysides.

2017: Hard storm in the night, the Strawberry Rains continuing, most of the honeysuckle and black walnut flowers down, the first privet flowers on the sidewalk. Some zinnias have survived the rain, sprouting in patches. Buds becoming prominent on the stella d’oro lilies. Robin vespers strong at 8:00 p.m.

2018: Mild and rainy, honeysuckle flowers coming down, and the viburnum is almost done shedding, covering the tulip garden with white petals. Through the alleys last night, locust flowers fat and fragrant, flag iris in full bloom, deep purple, pale yellow and violet. Buds have grown out of the stella d’oro leaves, sweet Cicely has finished its blossoming, fleabane is wide open near the pond, the golden ranunculus (remnants revived from the first south garden of almost forty years ago) color the ragged east garden next to the house. From Spoleto in Italy, Neysa sent a photograph of a wild orchid on the hillside of her property.

2019: Some locust petals falling in the wind on Davis Street. The flowers of the snowball viburnum on the north side of the house have suddenly lost their vitality, some darkening.

2020: Rain and cool. The hackberry trees in my yard are finally showing green. The snowball viburnum on the north side of the house holds its petals. In the countryside: one wheat field seen only a foot or so tall, deep green.

Something must be lost or absent in any narrative for it to unfold: if everything stayed in place there would be no story to tell.