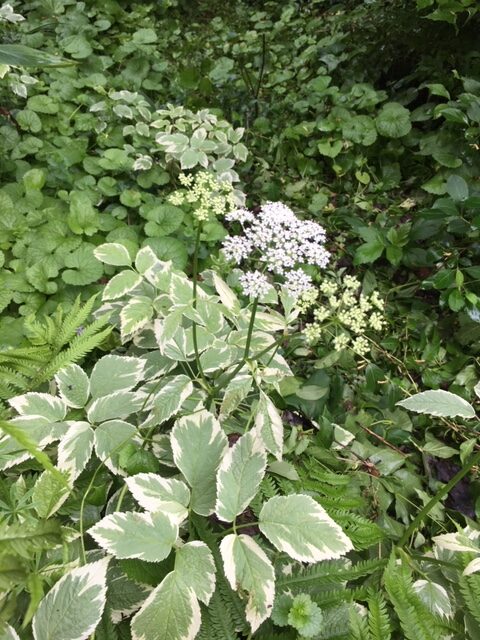 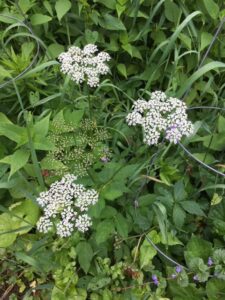 May I not serve, then, in Thy garden

And in Thy fields and farm,

Stirring the soil around the radishes

And pulling rhubarb by the fence?

In crumbled, tendered soil within the row?

Pausing to know the lilac’s dearness,

The gentle petalled rose upon my lips,

The lemon balm so sweet on fingertips,

And the sharp, wild scent of catnip cornered there.

Warm to the sun in overlapping layers

Of joy and productivity.

Cut at first bloom to hold all good within.

Another milestone in the progress of summer: from now through the middle of September, the chances of a day in the 90s are at least ten percent. The remaining temperature distribution for May 28: 80s on 40 percent of the afternoons, 70s on 15  percent, 60s on 30 percent, and 50s on five percent. The arrival of the final high pressure system of the month increases the likelihood for a very slight chance of frost tomorrow morning. The possibility of rain declines from yesterday’s 50 percent to 35 percent, but skies are often overcast: four years in ten allow almost no sun to shine through.

The Hinge of Early Summer

There’s night and day, brother, both sweet things; sun, moon, and stars, brother, all sweet things; there’s likewise a wind on the heath. Life is very sweet, brother; who would wish to die?

On the hinge of Early Summer, the balance of time and vegetation wavers and swings each day, inventories on either side holding seasonal tides in opposition, residue in compensation with new sprouts. This is a pivotal time that appears to be all in the favor of summer, but really is a door that opens back to spring, as well, allowing a kind of simultaneous passage to and from, eddies in the solar tides, receding and proceeding.

On one side, the blossoms of Late Spring: the pink sweet rockets, the yellow swamp buttercups, the pale blue waterleaf, the violet wild geraniums, white Solomon’s plume, deep purple larkspur and columbine, the golden-pollen clustered snakeroot, the iris, the poppies, the peonies, the catchweed with its sticky stems, the wisteria, the honeysuckles, weigelas, mock orange, the high locust clusters, yellow poplars and the fading privets.

The two tides may overlap, and a drive south two hundred miles pulls up the tide of Deep Summer; two hundred miles north Early Summer lies well behind the height of Late Spring. None of that matters of course: all the seasons are constellations of Borrow’s “sweet things.” Whether one observes them or not, the particles of the landscape’s transition are particles of human transition. Physiology follows the lengthening day like the face of a sunflower follows the sun.

1983: Jacoby, air heavy with the smell of sweet rockets and mint. Tall buttercups, ragwort, water cress, garlic mustard, sweet Cicely are the dominant flowering plants near the swamp now. The cowslips are gone. Red-winged blackbirds warble and cackle. The swamp iris have still not bloomed (noticed full bloom June 8). Clustered snakeroot is becoming more prominent in the woods. Two dogwoods still have flowers. Sedum old. Catchweed overgrown now by the wood nettle and touch-me-nots. Still a few white spring cress, some great angelica five feet tall, mosquitoes troublesome, a patch of waterleaf with violet flowers, a few white and blue violets, and blue phlox peek out from under the Early Summer foliage. Multiflora roses budding. Common cinquefoil found in bloom. Grass waist high all along the river. Golden Alexanders and swamp parsnips full bloom. May apples are speckled with age, but some still flowering. A few wild geranium. Jack-in-the-pulpit limp and pale, some already fallen over. Up the hill towards Middle Prairie, I surprised an opossum coming around a bend; it climbed a tree and looked down at me.

1993: John, down from New York Mills, eats the first strawberry of the season. At the Cascades, first black damselfly seen, first gold-collared blackfly, first green tiger beetles. Yellow and blue stargrass found. Blackberries in early flowering. Flurries of locust petals fall in the breeze. Yellow poplar hulls on the path. At South Glen fishing with John (three bullheads, one carp caught in an hour and a half – the first bullheads ever found in the river in all the years I’ve fished there).

1996: The days continue gray and wet and cold. Along Dayton Street, the snow-on-the-mountain has come into early full bloom now. Maybe half the blue flags are out along the north garden, and a few of the sweet Williams that survived last year’s neglect have blossomed too. The pale blue hyacinths are almost gone in the south garden; beside them the spiderwort has developed large blue blossoms. This year’s one poppy has just fallen apart in the rain. The daisies, buttercups, and pyrethrums are full. In the east garden, the bleeding hearts are just about gone; the azaleas have lost almost all their petals. Columbine still tall and strong, dominating the mood of late May in its small patch. Throughout the village and the Glen, the locust flowers hold on rich and fragrant. Honeysuckles and mock orange and peonies are at their height. Scorpion flies noticed in the garden several days ago. Strawberries still very green.

1999: Catalpas flowering at the end of locust time, after peonies and flags and honeysuckles.

2001: Cottonwood or water willow cotton on the path at South Glen.

2007: Ninebark that has been blooming for weeks in the alley has declined quickly in the past several days. Iris disappearing, lilies coming in. Hollyhocks budding in town. Ranunculus patch in the southeast garden is down to maybe half of its blossoms. Sweet rockets declining quickly. Black walnut fruits half an inch across.

2008: Lows in the 40s this morning, some 30s north. Iris, Dutch iris, peonies, mock orange, weigela, sweet rockets, late poppies, chives, horseradish hold at full. The back locust trees are still white with flowers, but locust petal fall has begun about town. Most of the petals from the north viburnum have come down. Wren feeding her babies from the suet in the back yard. Mo, the  cat, caught a June bug in the living room today. In the late afternoon, three young grackles were being fed by their parents close to the back porch. Heavy bird activity throughout the day, wrens feeding suet to their young, and grackles flying all over.

2009: Four pond iris in bloom today, down from ten yesterday. Large allium are holding, the smaller ones gone several days ago.

2010: Young sparrow seen begging for food. The first dragonfly of the year, large (maybe three or four inches long) came by as Jeanie and I sat on the back porch. From Madison, Wisconsin, Tat reports that her lilies are starting to come in and that peonies are almost gone, bringing southern Wisconsin virtually in line with the trajectory in Yellow Springs.

2012: The first cardinal heard at 4:50 a.m.  Ninebark in bloom along Dayton Street, the first purple coneflower in front of Don’s side house. Don’s cherry tree loaded with ripe cherries. Panicled dogwood full bloom and butterfly bush fully budded along Limestone Street, starting to bud here at home. Constant robin, cardinal, sparrow calls all morning, mixed with the raspy scrawing of the starlings. On my evening walk with Bella, I found the first orange ditch lilies open.

2013: Parsnips open along the road south to Xenia, some multiflora roses, too. Kousa dogwoods hold their petals at the south end of town. Large allium hold. Black swallowtail passed quickly through the yard in the afternoon.

2014: Black walnut flower clusters on the sidewalk this morning.  A moth similar to an Anticarsla gemmatalis moth, pale tan with a reddish line across its wings, was perched on the wall by the front porch light.  First Canadian thistles and parsnips noticed in bloom near the mall. Grackles active in the yard this morning, and two fledglings begging near the suet feeder.  Robins sang constantly, peeping and chortling, as I planted zinnias. The red-bellied woodpecker called occasionally through the day. A small black swallowtail flew by me as I walked to the shed.

2015: 8:00 a.m., sun, mild: Potpourri: Weigela at Mateo’s house is losing petals. Our weigela half done. Peonies still look good, and four of the tall allium and three of the Japanese wisteria blossoms still violet, white waterleaf flowers by the pond, wild onion heading up in the alley, bittersweet flowers to seed there, tiny buds on the euonymus, nine-bark starting to rust just a little, pink spirea prominent in some yard plantings, garlic mustard all to seed, pie and sweet cherries faintly blushing, constant raspy calls of the starlings (and feeding heavily, along with the grackles), cardinals and doves singing, one stella d’oro lily at the Lawson’s next door,  eight of the deep purple pond iris are ready to break out, and overnight, June arrived with a great patch of the sundrops opening, so bright yellow. Like last year, however, only an occasional butterfly during the past week: one red admiral and one cabbage white.

2016: The Japanese water iris has a few thin, inconspicuous buds now, and many stella d’oros and ditch lilies are extending their stalks.  Most of the pink peonies along the south border of the yard are open, and the penstemon by the peach tree finally is starting to flower. In the daisies and mint, the small orange bugs (Poecilocapsus lineatus) continue to damage the leaves. The arrow wood vibunum (Viburnum dentatum) that I planted to fill a hole in the south honeysuckle hedge has delicate white umbels in bloom. In the north garden, the one surviving red Knockout rose is becoming a bright marker between the rich purples of the spiderworts at their best. Throughout the village, roses are taking their stage.

2017: Judy writes from Goshen, Indiana: “Is it frog mating season? Our ponds are reverberating with what sounds like cosmic burps!” Here at home, the heliopsis is budding, and the white-flowered waterleaf is blooming by the pond. Almost every peony has melted from age and the rain. Osage flowers have fallen to the hosta near the shed, and red mulberries are darkening the sidewalk on Davis Street and the south end of Jill’s driveway.

2019: Storms and heavy rains continue across the Midwest. First ditch lily bud noticed. Don’s ninebark is in full flower. Yellow poplar blossoms seen at Ellis. The spindly viburnum I transplanted to near the dooryard garden is finally blooming after four years. When we returned from  a movie this evening, I found a June bug waiting near the front door.

2020: Don’s ninebark flowered today. Privets almost ready to open. Buds have formed on the stella d’oro lilies  in the east garden. Black walnut catkins are down in the alley, and the front path is slippery with spent honeysuckle blossoms. Thin buds have formed on the Japanese water iris planting. Mateo’s weigela still holds. The second tropical storm of the season came ashore on the Carolina coast.

Although we are accustomed to separate nature and human perception into two realms they are, in fact, indivisible. Before it can ever be a repose for the senses, landscape is the work of the mind. Its scenery is built up as much from strata of memory as from layers of rock. Environment then is as much the mental as it is the physical.