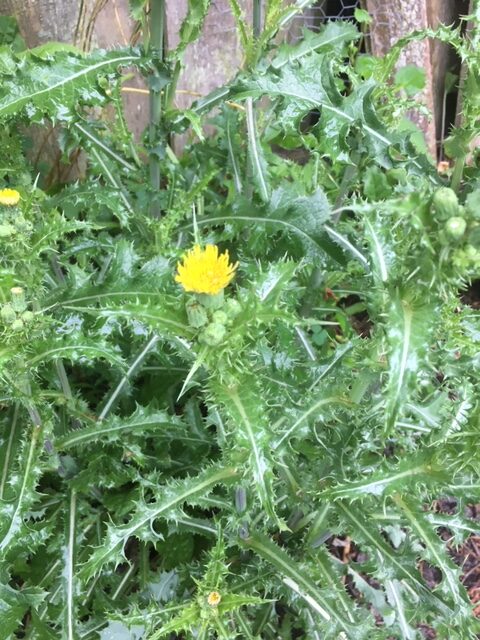 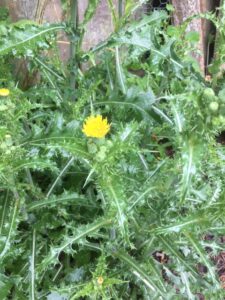 This is often a cooler day than the 22nd, due to the passage of the fourth major high-pressure system of the month. The chances of a high in the 60s or 70s jump to 40 percent; 55 percent of the time, however, highs reach into the 80s, and 90s come five percent of the time. The sun appears 85 percent of the days, but thunderstorms occur three times in a decade on this date.

Poison ivy has green berries. The first touch-me-nots and the first thimble plants flower. Rugosa roses are in full flower, accompanied by black-eyed Susans, wild petunias, and hobblebush. Staghorns have pushed out on the sumacs. Catmint and the short, bright yellow primrose (Oenothera) come to the end of their blooming seasons.

1989: Virginia creeper in full bloom. Garlic headed in the garden. Clustered snakeroot now all gone to seed like the waterleaf. Peaches half size, apples a third size, cherries all ripe, mums cut back. Yucca is open in Xenia. Wild black raspberries are coming in, and mulberries are at their peak.

1991: Three young grackles were in the back yard this afternoon, fed cherries by their parents. Tonight, a cecropia moth, huge and soft, came to the front porch light.

2002: Kelleys Island: Robins calling by 3:45 a.m. By 4:30, the redwings start cackling, and robins are all over the ground   mating, bold and raucous throughout the campground. By 4:50, the robin activity declines, and blackbirds take their place in the grass. All day: mayflies swarming.

2003: Pale blue-bodied dragonflies appear at the pond for the first time. As I talked to Neysa about the morning sounds, I mentioned – and realized at the same time – how the crows have been silent all year. Did the West Nile Virus decimate the flocks?

2008: The blue jay, sparrows, cowbirds, downy woodpecker and finches continue to appear at the feeder, but the grackles are still absent (until one this evening). The first monarda opens all the way. Don’s cherry tree is full of red cherries, and mulberries keep coming in. New elephant ears transplanted near the old ones that have only emerged an inch or two. New England asters transplanted to the far east garden. Young doves in the grass this afternoon; I walked within a few feet of one.

2009: Early morning birdsong strong today at 4:30, even a screech owl in the back trees. In the alley, the black raspberries have reached their best, all the bushes full of berries. Great ragweed has grown waist to chest-high. The great mullein I’ve been saving at the front sidewalk has opened. The one wild lettuce allowed to grow at the northeast corner of the yard is at least eight feet, maybe ten feet tall. In the vegetable garden, two poke plants are pacing the Jerusalem artichokes at seven to nine feet. Two Shasta daisies have opened today. The new Dutch iris plant has produced one beautiful, dark purple flower, almost like a Japanese pond iris.

2011: More transplanting of annuals and perennials in the cool, cloudy afternoon and evening. Another sparrow fledgling begging for attention. I am noticing how our absence during May has made the gaps in the perennial garden more apparent. Without the recent memory of bloom sequencing, I feel an emptiness that is more a disconnection or a failure of connection; I feel only the present, not so much its part in the cycle.

2012: Frog calling off and on through the night. A cardinal woke me at 4:30 this morning. Crows came by around 5:00. At 6:30, a great chorus of sparrows, robins, starlings in the back yard. At 7:30, an even louder confluence, with visits from a cowbird, a jay, several grackles, chickadees, every creature in full voice. The violet monardas are coming in now. One great spangled fritillary in the butterfly bush today, two zebra swallowtails at the lilies, twenty-nine different lily varieties throughout the garden.

2013: Last night, warm and humid: fireflies sparkled in the butterfly bushes and in Jeanie’s river birch. This morning at 4:20, full moon setting, the birds were in high chorus, cardinals and robins, sometimes the song sparrows. And down Limestone Street, then up Elm, I heard the soft rattle of the new summer crickets. Before I left for Italy, no crickets, no fireflies; now, finally at home, I am in the middle of them. As I talked to Annie late this morning, blue jays were calling and calling around the yard.

2014: Soft golden dawn, late fourth-quarter crescent moon, so clear and crisp over Lil’s house. After I fed the fish, I looked up and noticed that the trumpet creeper had not only crept to the top of the greenhouse wall but had started to bloom, four fresh blossoms. By the crab apple tree, I discovered a lost “Endless Summer” hydrangea (which I thought had been killed by the cold) pushing up through ferns. I cleared it out: it has one bud cluster, maybe the first since Jeanie died. The first Japanese beetle of the year found on one of the yellow primrose blossoms.

2016: Twenty-three lily plants this morning, down nine or ten from yesterday as the Stella d’oros go into quick decline and the ditch lilies thin. One zinnia just starting to open. Last night, a long chain of thunderstorms passed through, seeming to last for hours, Bella very frightened. This morning, flowers and shrubs and bamboo leaning from wind and water. This evening along Polecat Road, I saw most of the Canadian thistles had gone to seed.

2018: Sixty ditch lily blossoms, ten day lilies, three Stella d’oros, three Asiatic plants with about a dozen flowers in all. I found the first Japanese beetles; they were mating in the ferns. The buds in one lily patch have been eaten off by deer.

2020: Thirty-two ditch lilies, three Stella d’oros. Cirsium horridulum, a prickly thistle about two feet high with a yellow flower found blooming in the alley this morning. That variety is most often found in the South or East, apparently unusual here. Hope I have the identification right! First Shasta daisy seen at Don’s house. Tree crickets chirping along the north hedge of the house through the day. Reports of monarch caterpillars in Kentucky. Maggie in Madison says her milkweeds just opened, so Madison has caught up with the Lower Midwest.

Afoot and light-hearted I take to the open road,

Healthy, free, the world before me,

The long brown path before me leading wherever I choose.