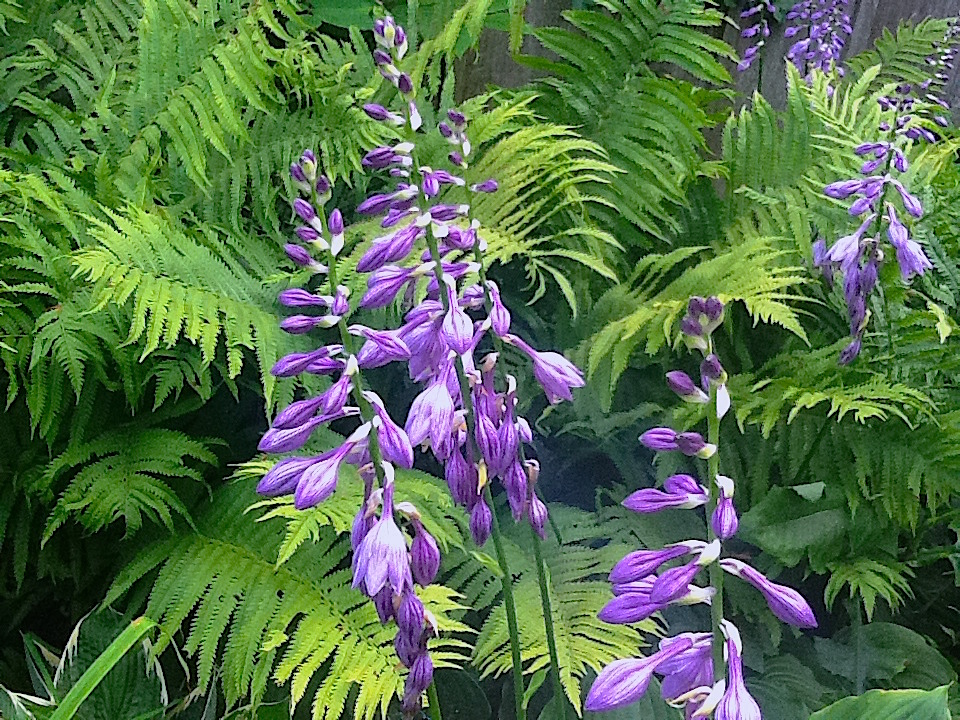 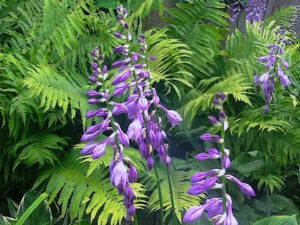 And mid-time of night;

And stars, in their orbits,

Of the brighter, cold moon,

Herself in the Heavens,

Her beam on the waves.

Afternoons in the 80s occur about 50 percent of the time; highs in the 90s com on 40 percent of the afternoons, and only ten percent are in the 70s. The likelihood of rain increases to 30 percent, and odds for a completely cloudy day are one in four.

The first one hundred days of the year move the center of North America through the seasons of Deep Winter, Late Winter, Early Spring and finally, at the end of March, into Middle Spring.

By the one-hundredth day, April 10th, the landscape has entered its most benign period, even in the coldest years. When the fields are dry enough, farmers plant the first corn. Pastures turn purple with purple deadnettle, gold with dandelions. Winter wheat is bright green. Robins sing at 6:00 a.m., cardinals at 6:25 (Eastern Daylight Time).

Between the one-hundredth day and the two-hundredth day, the land along the 40th Parallel completes Middle Spring, passes through Late Spring and Early Summer, then enters Deep Summer. By July 19th, the robins no longer sing before sunrise, and cardinals sleep late. Katydids and crickets often fill the nights. Cicadas whine through the afternoons. The field corn is tall, the sweet corn and tomatoes are coming in, and the wheat harvest is complete.

In another one hundred days, on October 27, most of the canopy will be gone throughout the northern half of the United States. Middle and Late Summer, Early Fall and Middle Fall will have passed. The wildflower and garden seasons will be almost over. Witch hazel will be the only shrub in bloom. Farmers will have cut their soybeans and their corn for grain. The birds and cicadas and katydids will be silent; only the crickets will remember July.

1986: South Glen: Tall coneflower with buds. Milkweed has very small pods. No ironweed in bloom yet, and only a very few wingstems. Along the roadsides, Canadian thistledown is coming undone in wads, spreading puffed and disheveled. The first elderberries are turning purple, marking the last course of Deep Summer. When they are all dark, it will be Late Summer.

1990: Cicadas first heard today. Katydids first heard in the yard after dark. Dame’s rocket seedpods drying out, some brought inside to save. Joe Pye weed is heading, lilies thinning. At Caesar Creek in high water, four catfish caught in the late afternoon on dough balls, three channels and a blue.

1992: First cicadas heard in the yard as field corn tasseling begins toward Fairborn.

1993: First late-summer cricket seen in the garden. Downey woodpecker calls off and on through the day. Nuthatch seen at the bird feeder this afternoon, the first ever in the yard.

1997: The pond is almost complete now. The small water beetles dive continually and the water striders (which arrived within a week or so after the water) eat the small insects that fall in. The first huge blue dragonfly came by yesterday, circled the loosestrife and the pickerel plants then flew off, then zoomed back and forth over the house and trees and pond for maybe ten minutes. The first robins and starlings came to bathe the day before yesterday. In the north garden, the mallow is finally yellowing, more than half the large pink flowers going to seed. The hosta are in full bloom in the east garden.

2000: First yellow jacket of the year seen in the lawn.

2006: As I was doing katas this morning on the back porch, three young skunks scampered across the edge of the yard underneath the tall hostas. Around noon, the fledgling crows talked again with their parents. A black swallowtail and a tiger swallowtail seen in the garden today.

2007: More hard rain, thunder and lightning last night. This morning, the flowers and the bamboo are drooping and dark; the day feels like Late Summer. Crows in the back trees this morning about 7:30. A monarch butterfly visited the garden this afternoon. Katydids and crickets heard in full song tonight at 11:00 – the first time they’ve come in this summer.

2009: I ruminate in this dark, unseasonably cool morning, tempted to build a fire in the wood stove. I haven’t even heard cicadas yet this year, and now near-record cold temperatures. Yesterday afternoon, a high-pressure system arrived with wind that brought a shower of yellow locust leaves across the yard.

I can feel the seasonal changes going on inside of me, but I have no names for them. I watch the gray sky brighten slowly, my thoughts wander, and I page through the books on the table beside my chair. I open the I-Ching, an ancient Chinese text of divination, to the 12th hexagram called P’i. “This hexagram,” states the book, “is linked with the seventh month, when the year has passed its zenith and autumnal decay is setting in.” The commentary explains that at this juncture in the year “the dark power is within, the light power is without. Weakness is within, harshness without.”

If, as Gretel Erlich says, space has a spiritual equivalent, then there is some connection between dark and light in the landscape, weakness and harshness. I look for the spiritual equivalent of this morning and the chill, think about Thomas Merton’s “inner ground,” the deepest self that somehow bypasses or encompasses the outer ground, the harshness without.

When it is light enough, I go out and count the daylily plants in bloom. I notice that the oakleaf hydrangea flowers have darkened from white to pale green, some of the petals even reddish.

The opposite of the P’i hexagram is T’ai, which is associated with spring, when strength grows within, and the outward softens. Here on July 19, I meditate at one side of opposites that lie at either end of the year, yin and yang in opposing balance, a metonymy of reciprocity, the cause as effect, the effect as cause, Merton’s idea of world inside and outside, each side standing for the other, healing divisions and relieving burdens. I, between heaven and earth, am the door to each, the Taoists might say.

But who really knows about things like that! And the real problem is that I’m cold. I give in, crumple newspapers saved from April and May, put in the last of the spring kindling, make an autumn fire.

2011: Cardinals sang around 6:00 a.m., blue jays were calling along Stafford Street around 9:00, but the morning has been quiet. Spicebush swallowtail when I worked outside late in the afternoon. Intermittent robin and cardinals in the evening. Burdock early bloom in the Phillips Street alley, buckeyes maybe three-fourths full size in the Mills Lawn Park.

2012: Cardinals, robins, crows at 5:00. Thirteen lilies in bloom at home. Along Limestone Street, the Turk’s cap lilies are still in full flower. On the north trellis, the wisteria vine has come into bloom for the second time this year.

2013: Heat wave continues. Twenty-two lilies in bloom this morning, and the number of blossoms is declining quickly. Knock-out roses slowly coming back, phlox reaching full bloom, rudbeckia early full, the zinnias at their early best now, compensating for the gradual raggedness of the perennials. Grackles clucking in the back trees this morning. One zebra swallowtail, one fleeting black swallowtail, one great spangled fritillary around midday.

2014: Cool wave continues. Cloudy and drizzle. Twenty-eight lilies in bloom this morning The first arrowhead opened overnight in the pond. The last bloom of the trellis wisteria (which did not bloom in the spring because of the cold winter) has faded. No crickets or katydids heart tonight (temperature at 62), but fireflies continue to drift through the yard.

2015: Thirty-six lily plants in bloom today. A male tiger swallowtail visited the tithonia throughout the morning. In the past two days, almost all the mid-season hostas have completed their flowering. Monarda graying quickly. Shasta daisies and heliopsis anchor the northwest garden, zinnias and tithonias taking over the long north garden. More koi fingerlings have appeared at feeding time, seems like maybe a dozen! And I found the first long-bodied orbweaver of the year in its web over the pond.

2016: Only nineteen lily plants in bloom, two dozen blossoms. Last year’s koi fingerlings are at least three inches long now, a few of them maybe up to five. All but a couple survived the winter. No new fingerlings so far.

2019: The heat wave that began in the last days of June continues. One hundred fifty-six day lily blossoms, 23 ditch lily blossoms. At 5:30 this morning, peeping robins (no singsong mating calls) and strong cardinal song, some doves, some crows. Tree crickets steady and loud. Just a few minutes in the yard: a monarch, a silver-spotted skipper, an Eastern black and a graceful zebra swallowtail all in the zinnias and lilies.

July is weeds grown lush, horseweed in the waste place, and milkweed and nettle and forbidding thistle; and pigweed and purslane and rough-leafed German weed in the garden. It is string beans, and bean beetles; it is squash flowers, venerable symbol of fertility, and squash beetles; it is tomatoes coming to fruit and horned tomato worms which turn into sphinx moths.