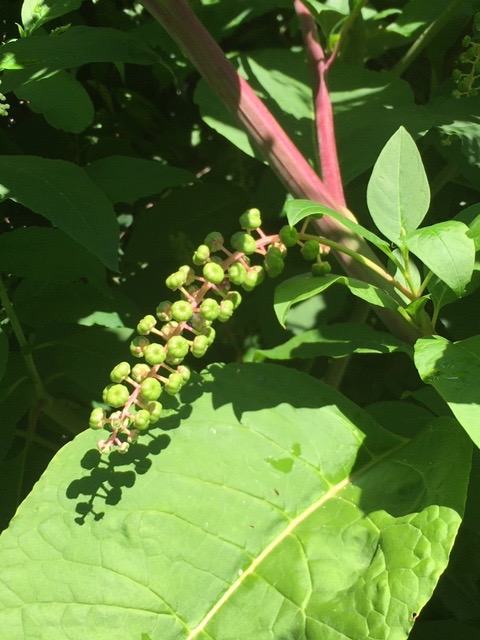 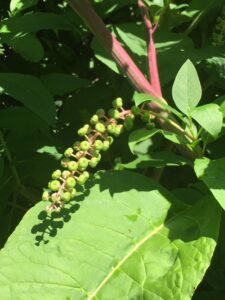 There, through the long, long, summer hours

The golden light should lie,

And thick young herbs and groups of flowers

Stand in their beauty by.

Highs reach into the 90s 15 percent of the time on this date; 80s occur 65 percent, 70s twenty percent. Only one day in 15 is completely overcast, but thunderstorms come through one day in three. One night in three brings chilly lows in the 50s; 2 out of 3 are in the 60s, rarely 70s.

By the last week of Deep Summer, the yellowing locust and buckeye leaves and the brown garlic mustard give a sense of autumn to the woods. A few Judas maples and Virginia creepers redden. Shiny spicebush, boxwood, greenbrier and poison ivy berries have formed. Wild cherries darken. Buckeyes and black walnuts are fully developed. Now Osage fruits are heavy enough to drop in a storm.

Asiatic lilies and day lilies disappear in the garden (but tiger lilies are still full bloom) as red, white and purple phlox reach their best. Lizard’s tail and wood nettle go to seed along the riverbanks. Blueweed, white vervain, motherwort and white sweet clover end their seasons. Petals of the hobblebush darken. Parsnip heads, honewort pods and sweet Cicely pods are dry enough to split and spill their seeds.

1985: Covered Bridge, 3:00 p.m., 90 degrees: Yellow aphids in the milkweed, gray aphids on the wingstem throughout the walk. Buckeyes up to two inches in diameter and prickly, some of the foliage turning. Some ragweed heading. Lizard’s tail gone to green and brown seeds now. Tall bellflowers are aging. Jumpseed and Joe Pye weed are in early full bloom. Wingstem, showy coneflower, heliopsis, ironweed full. Honewort has seedpods. A few tall coneflowers seen. Many wood nettle plants going to seed. Tall meadow rue has seeded; its leaves are turning pink and violet and cream, like sweet Cicely leaves in late spring.

1992: Mallow almost gone. Sycamore bark blown onto the street in a thunderstorm. Coming back from downtown, 7:45 p.m., I saw dozens of bats flying out from under the roof of St. Paul’s church.

1993: Katydid found under the dining room table, must have gotten in last night. He was clumsy, and I caught him easily. At school today, a few yellow branches on the ash outside my window, maybe a dozen clusters of autumn. Scattered cottonwoods turning in the Massey Creek valley.

1996: Home from Gentily and St. Olaf’s in Minnesota, two thousand miles in a week. Here, the mallow is almost done for the year, its pods opening in the humid afternoon, seeds ready to fall to the ground in a storm.

1999: The other morning, I got up early about four o’clock, and I stood listening to the katydids. When I tried to hold on to a single katy sound, it would recede from me so quickly, I’d lose it in the other sounds, mix it all up with them like I do when I try to watch one wave cross Caesar Creek and lose it in the flow of the other waves. Then I let myself be carried off with the katys, like a leaf in the current of their rhythm, downstream away into fall. Then I pulled myself back to stand at the bank of the syncopated chatter, listening to their calls go into the dark morning without me, over and over, the rough particles of time passing through and then beyond my consciousness.

2000: At the arboretum in Dayton, coneflowers in bloom everywhere, and clumps of giant red perennial hibiscus. In the ponds, arrowhead and large water plantain are in flower. At home, the heliopsis shows some signs of decline just as all the showy coneflowers have opened. White phlox still in its prime.

2003: The first blackberry found at South Glen this noon, most of the berries still red, but a few dark and sweet. Along the sidewalk in front of the house, the first jumpseed is getting white buds (the ones further down the block have already bloomed). Tonight at about 8:45, I heard more city crickets and the first katydid.

2004: I saw the first monarch in the yard this afternoon, sharing the zinnias with a bright green hummingbird.

2007: To the Cox Arboretum: no signs of Early Fall, all the gardens full and rich. Monarchs swarming in the butterfly house there.

2010: Cardinals strong at 5:00 this morning, then only peeping robins by 5:30 – urgent, steady. More tiger swallowtails at the butterfly bush – the plateau of swallowtails.

2011: A cardinal began singing at 4:50, sang on and off for over an hour. Heat wave continues, more highs in the 90s forecast for today. After lunch, one yellow tiger swallowtail, several crescents and silver-spotted skippers, one viceroy, one black swallowtail.

2012: Cardinals and robins when I went outside at 5:00 this morning. Throughout the day at random: fritillaries, zebra swallowtail, male tiger swallowtail, a spicebush swallowtail. (Reflections this morning about how the details on cardinal song or swallowtails are significant pillars of summer, that when they are absent, then the scaffolding collapses because of the disappearance of minutiae that act as cells or atoms of which time or season or mood is made.)

2013: Cool and clear this morning. Six lilies still in bloom. Tiny buds on Peggy’s virgin’s bower. Matt Mindy writes: “I was mowing yesterday and saw my first woolly bear caterpillar, the harbinger of seasonal change. I know it wasn’t totally fair game, as I may have uncovered him (her?), but it was most definitely a woolly bear.”

2015: Just before sunrise, I went jogging at the edge of town: I heard the loud rattle of tree crickets; chirping of field crickets; doves courting; a cluster of robins scouting the pavement and yards, but no robin chorus; some cardinal song toward the edge of town, but not near my house.

When the sun came over the tree line, a song sparrow, a red-bellied woodpecker called in the woods, and a kingfisher screamed over the pond. Near pasture fences, the dawn brought color to late yellow moth mullein and field thistle flowers.

Across the town gardens, there were blooming purple and golden coneflowers, daisies, late-July hostas, Russian sage, butterfly bushes, phlox, rose of Sharon, a rich display of the season’s moment.

When I got home, crows were settling into the back trees and were talking about something. And I found a katydid resting on the front screen door.

Looking back over my notes, I saw that a katydid had been sitting on my screen door on this date in 1993.

2016: Only two lily blossoms today. Thin-leafed coneflowers in full bloom at Jill’s, and many varieties of coneflowers provide the main garden color throughout the village.

2017: Strong, chilly fifteen-mile-per-hour winds through the morning, low in the 50s, bright sun, a feel of September. Three lily blossoms, three plants. Only cabbage whites seen in the garden today – but it should have been a good butterfly day – or maybe too windy.

2019: Sun, mild and clear. Walking at 5:00 a.m. to steady cardinals, tree crickets and doves, no robins or song sparrows heard. Bats fluttered above me in the morning twilight. In the garden, day lilies are down to 14, ditch lilies to four, the season that began on June 19 this year finally coming to a close. One giant swallowtail, multiple male tiger swallowtail, two males in randori with a black female tiger.

The air is full of drifting thistledown,

Gray pointed sprites, that on the breezes ride.