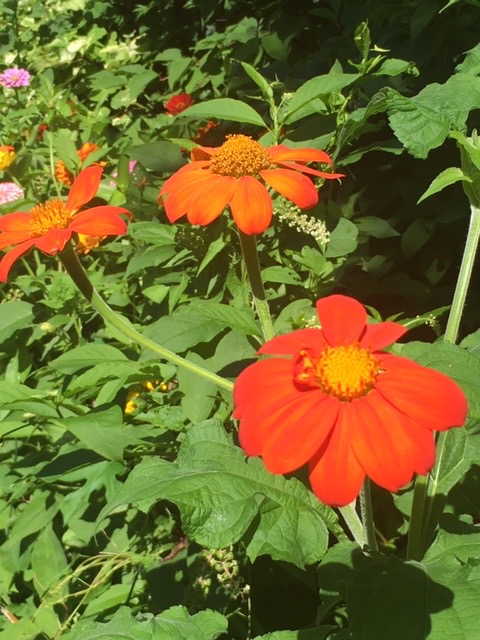 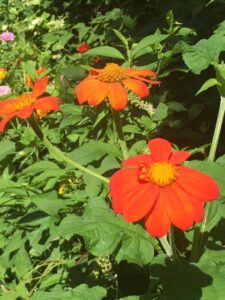 In her suit of green arrayed,

Hear her singing in the shade –

1984: Geese flew over this evening, the first flight of Late Summer.

1987: Fog this morning, patchy from Corry Street the full eight miles to Wilberforce. When I went south to Kettering in the afternoon, white boneset was blooming along the freeway. At South Glen, some buckeyes fallen to the path.

1990: Crickets seem to be getting closer but are still faint when I stand listening at the back door. No katydids yet. Lilies fading quickly now. White carpetweed, Morrugo verticillata, identified blooming in the garlic patch. Common and giant ragweed heading throughout the area now. At Jacoby Swamp, full Late Summer: golden wingstem, heliopsis, helianthus, bright purple ironweed, the screaming insects, restless robins and crows, the cardinals and doves still calling.

1993: A strong cool front moved in yesterday. Today the sky is bright blue, clear, dappled with disheveled low cumulus moving steadily from the northwest, the sun so strong, all the flowers glowing, the deepest tones to the coneflowers and the zinnias. Sitting behind the south windows near the bird feeders, l watch finches, chickadees, tufted titmice in a steady, measured sparring, jostling, feeding, preening, waiting.

1996: I am settling into Yellow Springs again, my mind coming back to my body, which returned from Minnesota a couple of days ago. I left here at the end of Deep Summer, came back into Late Summer. The hostas are tattered, and the maple leaves are darker. The air is heavier, the birds so quiet. I can’t enumerate everything that has happened to make it so, but the season has changed. This morning, I took Fergus out at five o’clock. As I stood at the west side of the house, I saw dozens of pale moths spinning in the air, just born maybe, testing their wings.

1997: The same weather as on this date in 1993: cool in the 70s and the sky pure and clear. Late day lilies are still strong. Phlox is in full bloom throughout town (although disease has taken over ours). The first resurrection lily is about to open in the south garden. Most of the mallow is done; all the zinnias are coming in now, all of the showy coneflowers. Garden tomatoes have started to ripen. The second generation of roses started maybe four or five days ago. Three monarch butterflies seen in the past four days. At the pond, Jeanie saw green darners laying eggs and mating. No katydids yet. Dragonfly naiad found today, almost invisible among the stones, large pale brown, walking slowly across the floor of the pond; it must have emerged from an egg laid only weeks ago – the pond barely filled on the fourth of July.

1999: The heat wave continues, today the 20th of this summer’s days above 90 degrees. Throughout the Northeast, down into the Carolinas, crippling drought. The bullfrog still calls in the pond.

2003: The yard quiet at 4:45 this morning. By about seven minutes to five, the cardinals were singing down the block.

2004: To Jacoby for the first time in a year or so: All of the paths are overgrown now, and Bella and I followed deer trails, lost our way, finally ended up at the swamp and made our way back through the brambles to the road. Bella’s ears and my pants were covered with what looked like tick-trefoil burs. The undergrowth was decaying everywhere, but a buttonbush (Cephalanthus occidentalis) was in bloom, some of the flowers already past their best; it probably blossomed first several weeks ago.

2005: Cicadas strong in the cool morning: sun, clear, high barometer. Squirrel chatters in the mulberry. Elephant ears flop in the gentle breeze. Wren comes by at 5:45. Dozens of cabbage butterflies, a few skippers and blues, a male tiger swallowtail, a spicebush swallowtail, a monarch. A hummingbird vies with a monarch in the coreopsis and helianthus. Slow flutter of yellow leaves to the ground, one caught on a spider web spins in the wind. Robin clucking.

2006: Record heat wave baking the Plains and Midwest. High humidity and 90s here. Swallowtails and monarchs becoming common in the yard. Cicadas strong in the back trees from early morning until dark. At night, katydids and crickets as loud as I’ve ever heard them.

2007: Violet hosta flowers on bi-color leafed plants continue to add substantial color to the north garden. In the southeast corner garden near the pond, the August Moon hosta is stretching out its fat buds. Rose of Sharon blossoms are in full bloom, providing broad areas of violet and pink and white to the edges of the property. Tiger swallowtails, spicebush swallowtails and monarchs seen every day now.

2009: Mrs. Timberlake’s resurrection lilies are in full bloom, as are the ones along Elm Street. Only thirteen day lilies in flower this morning, and those are on their last blossoms. Three Asiatics. But the yellow rose has started to bloom again. Cardinals strong between 5:00 and 5:30.

2010: The best day so far for swallowtails in the butterfly bush: four tigers and a spicebush at one time, accompanied by a monarch. At the Cox Arboretum, several monarchs seen. All lilies gone there. Annuals and hydrangeas – the paniculatas – provided the most color.

2011: 8:10 p.m. first katydids. 8:20, full katydids. 8:30: screaming crescendo of katydids and the pulsing song of field crickets and the steady screech of tree crickets, overwhelming me as I sat outside on the porch.

2012: Cardinals and robins when I went out at 5:00 this morning. One lily plant in bloom in the yard today, two blossoms. Zebra swallowtail and tiger swallowtails, one monarch. One resurrection lily in full bloom along Union Street this evening. Ours have not come up yet, may not have survived the summer heat.

2013: Six lilies with one blossom each this morning. Three male tiger swallowtails at the butterfly bush all day. Around the yard, the rose bushes have not really recovered from their first bloom, will need more fertilizer through the Late Summer and fall. Joe Pye is in full flower, as are the Shasta daisies, the purple phlox, the Sum and Substance hosta, the white phlox and the rudbeckia speciosa. Remnants of gooseneck loosestrife, purple coneflowers and spiderwort. Now the zinnias completely dominate the garden, and the gladioli look like they will offer complementary color through August. In Peggy’s yard, her Limelight hydrangea is strong, and the flower clusters have turned to pale green. Her tall coneflowers and gray-headed coneflowers clearly mark the corner of High and Dayton streets, as well as the time of year. Partridge pea is in full bloom in front of Tim’s house on Dayton Street. At Ellis Pond, a few leaves on one young sugar maple have started to turn. This evening, a message from Judith Ezekiel: she had morel mushrooms growing in her yard.

2014: Seventeen different lily plants this morning. One skipper and an Eastern Black Swallowtail flew by while I was outside this morning. At lunch time, a great spangled fritillary visited zinnia after zinnia. A small orbweaver made her web on the banana plant by the back porch last night or the night before. Naked ladies (resurrection lilies) blooming along Dayton Street.

2015: Cardinals strong after 5:00 a.m. Eleven lilies in bloom, most of those with only one blossom, their last. Swallowtails on and off throughout the day, and the garden very much as I described it this day in 2013. Message from Matt Minde this evening: he found a luna moth when he was mowing the lawn, the first time a luna has been reported to me in Yellow Springs.

2017: In the backyard this morning, two golden foldwing skippers playing in the sun like they have for decades here. No lilies open this morning. The first peach, still green but full-size, fell to the ground. In the garden: one great spangled fritillary, one black swallowtail, one possible monarch (as it sped past me), several golden fold-wing skippers, one silver-spotted skipper, many blues and cabbage whites. In the far west border of the lawn, the August Moon hostas have bloomed.

2018: A cardinal sang at 4:25 this morning, an then a soft rain began. There was no more birdsong, and I sat on the porch listening to raindrops on the roof and the leaves of the elephant ear plants that reached out into the yard. In the dark before dawn, the patch of garden daisies created a vague patch of light, a ghostly shape in the black shrub line behind it.

When the rain let up a little at 5:10, the cardinals started to sing in a loud steady conversation throughout the back yard, and the calls continued for about twenty minutes. Then silence. The air became cooler, a breeze coming up onto the porch, and I covered my legs with a blanket.

Walking down Limestone Street, I noticed black walnut leaves all over the road. At home, a total of three forlorn lily blossoms on two plants. A monarch in the milkweed midmorning, a male tiger swallowtail and a giant swallowtail in the afternoon – and I only spent a few minutes looking.

2019: Sixteen day lily blossoms, four ditch lilies. Very first cardinal heard at 4:35 this morning, then silence until the neighborhood cardinals began together at 4:50. Blue jay at 5:15, doves about the same time. No robin song. Katydids calling when I went out at 4:00 a.m., and several field crickets heard on Phillips Street. As the sky became lighter, only the birds sang. Multiple tiger swallowtails in the zinnias today, sometimes four at a time. Monarchs are here, too.

2020: A cool, cloudy day with light rain off and on. Lily count: Eight day lilies, 14 ditch lilies, three naked ladies budded. Dennie Eagleson sends a photo of purple elderberries ready to be made into wine and jam. In the back yard, the first poke berries have started to turn purple.

In a sense, time is a kind of wilderness, and we have a deep impulse to mark and domesticate time just as we do land.

Researchers who study time often refer to “time in nature” as “wild time,” time that has not been domesticated by mechanical clocks or human schedules.

Now, when katydids and crickets start to fill the nights with their rasping and shrill rhythms, one might enter the wilderness that lies ahead by keeping pace with the measures of the insect metronomes.

Free from society’s clock and calendar, the crickets and katydids create an audible structure under which the first purple blossoms of the tall ironweed open in the fields, and under which blackberries ripen, and grackles come together, flocking before autumn.

Starlings spin in murmurations now above the bare wheat fields. On the East Coast, shorebirds move south, often stopping to rest on North Carolina’s outer banks. In the honeysuckles of the Midwest, adult robins teach migration calls to their young.

Thistledown unravels completely to the wild time of cricket songs and katydid-dids, and seedpods form on the trumpet creepers. Ragweed heads up as honewort and wood nettle, mallow, and tall meadow rue go to seed. Patches of yellow appear on cottonwoods. Black walnut leaves start to fall.

All across the country, Joe Pye weed, tall coneflower, white snakeroot, and Japanese knotweed bloom in the open fields and along the fence rows. Dogbane seedpods swing in the wind. Pods of the touch-me-not burst at the slightest movement. To the calls of the crickets and katydids, grapes and elderberries and pokeweed berries darken in the wilderness.

For you the light dispels the darkness; for you the sun, moon, and stars shed their light; for you the earth bears flowers and trees and fruits; for you the air and earth and waters are all filled with marvelous life – all so that earthly life may not be sad and make you blind to the joy of eternity.