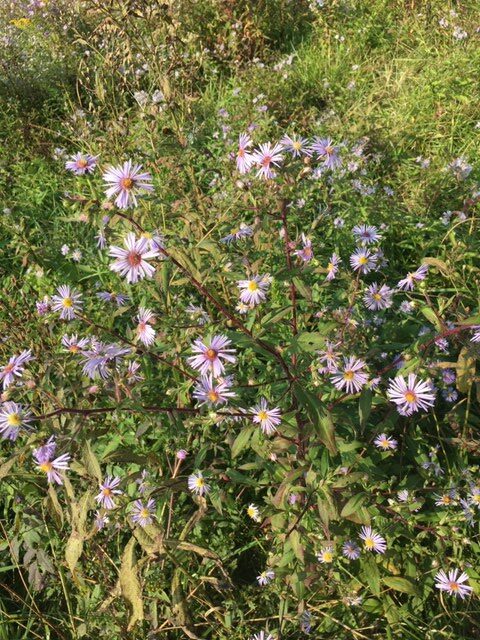 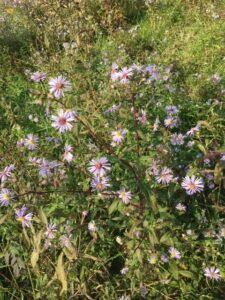 All about us, there was marked change. Mornings were cooler and crisper than before. The ever-lengthening shapes of afternoon shadows seemed drawn more irresistibly into the night. Fields were rough and tweedy, as though an old brown woolen jacket had been thrown over them to ward off the chill….

The Libra Sun straddles the phases of autumn in Yellow Springs and the Lower Midwest, ending almost all the wildflower seasons and accompanying the start of the most dramatic phase of leafturn in the entire year. Although Scorpio (October 23 to November 22) shatters the last of the canopy, Libra takes the earlier trees, especially the ashes, box elders, buckeyes and locusts, then quickly colors the best of the maples.

1985: At the Cascades, oaks, ash, cottonwood are turning, ashes dropping leaves. Peach leaves suddenly on the ground by the garden wall.

1986: Half the pussy willow leaves are gone.

1988: A cardinal sang once this morning. Buckwheat on Grinnell finally turns, matted from the rain. Purple asters are common now, small white asters in full bloom. Starlings fill the trees at the dairy outside of town.

1992: The weather graph records the consistent arrival of the first real cold front of the season around this date. The breath of the world is steady, but with almost human variations. The years, like people, are of the same species, have different personalities: some are identical twins, some diametrically opposed, but all share certain characteristics.

1993: At the Mill, new-born water striders skating on the water, constant, playful movement.

1997: Virgin’s bower has disappeared now, its petals having fallen in the past week. Rose of Sharon still produces flowers, but far fewer. No trumpet creepers noticed recently. The very last showy coneflower is blooming today in the south garden. Across from the pond, the New England asters are all blossoming, and roadside asters, violet and white, still appear to be completely in bloom. This morning at breakfast, I was looking out at the high locusts: two squirrels were mating thirty feet above the ground.

1998: Another thin-bodied blue-tailed dragonfly at the pond today. One skipper and a few cabbage butterflies, too.

1999: Yesterday, long flocks of blackbirds were crossing the highway. This morning, a cardinal sang at 8:39. We went north to Kelley’s Island in Lake Erie later in the day, the weather warm, cirrus clouds sweeping up from the southwest. The trees were pre-autumnal 150 miles from Yellow Springs, vague, misty tones in the tree lines suggesting fall, but still keeping a deep green sense of early September. Near Sandusky, a long flock of red-winged blackbirds. On the island, everything was so dry. But the lake was rich with bass and sunfish. We sat on the rocks and caught something on almost every cast. It was wonderful to sleep with the wind on the tent, the air full of the smell of water and dried leaves and fish. I stayed awake a long time, listening and feeling.

2000: Gethsemani Monastery in Kentucky: A cardinal at 6:10 a.m., then migratory robin calls. Wrinkled, black datura seeds gathered from their dried calices. In the monastery pond, one lotus flower was left; I took one seed from a rotting pod.

2003: Along the north garden about 2:00 p.m., five monarchs seen together in the zinnias. Wooly-bear caterpillars and monarchs common as I drove to Wilmington this afternoon.

2005: Albert, the green frog, was croaking this morning about 5:00. Along the bike path, many honeysuckle bushes yellowing.

2008: No birdsong this morning except a few blue jay calls after dawn. To Wilmington: Warm and sunny, high in the 80s. My ash tree at Wilberforce is yellow and has lost more than half its leaves. The foliage there and throughout Greene and Clinton counties is turning quickly, with many sweet gum, early maples, ashes, hickory, locusts and box elders shaded with gold or orange. Most of the soybean fields near Wilmington are brown, almost all their shedding complete.

2010: Near record temperatures in the 90s today. One monarch, one spicebush swallowtail seen at the butterfly bush.

2011: To Gethsemani Abbey, Kentucky: Rain throughout most of the trip, then breaking clouds and blue sky once I turned onto the Bluegrass Parkway. Throughout the drive, early leaf turn was accelerating, with many ash trees completely gold or violet, many losing their leaves, cottonwoods ochre and shedding, locusts and grapes pale yellow, streaks of red in the sumac, deep red Virginia creepers revealed in the thinning canopy, specks of gold in the silver olive, the undergrowth weathered and rusting, the goldenrod in full bloom, corn and soybean fields turning, maples joining the ashes, even Osage orange leaves tattered and drooping. At the monastery, warble chatter of mockingbirds, “chit” calls of cardinals, far crows, blue jays, some tree crickets, and a cricket that seemed to chirp like a clock ticking, two chips a second. One monarch heading southwest through the courtyard. As the bell tower struck four o’clock, a giant prickly chestnut fell off the tree beside me, opened and spit out its burnished seed. Before Vespers, 4:10, the sun came directly in onto the altar. At 4:30, it had moved to the cross beside the altar. It will always do that at Vespers when I am here for equinox, linking me to this place at this particular time.

2012: Crows at 6:15 this morning. At Ellis Pond this evening, beggarticks were darkening, and their leaves purple with age. The last white vervain flowers were gone. The arrowhead leaves were mottled, and the ash grove was a deep autumn forest green, tinged with a hint of violet.

2013: Crows at 6:12 this morning, a cardinal singing off and on when I walked Bella at 7:30. A hawk/hummingbird moth was sitting on the porch beneath the light when I got up, and it is still there this noon. As I ate lunch on the back porch, another hummingbird moth visited zinnias, both in the circle garden and along the north border of the yard. Several hummingbirds vied for the feeder. Cabbage butterflies played in randori above the butterfly bush. The white crocus still blooms near the last giant flower of the pink hibiscus. In front of Annie’s house, a bush daisy (olearia) has just produced its first blossoms. Along the highway to Xenia, the corn is mostly dry and brown. Whistle crickets started intermittent calling while I was outside at 4:00 this afternoon. No orb-weavers seen today.

2014: Again clear and cool: Painted ladies, bright sulphurs, cabbage whites, folded wing skippers. The hummingbird came to the zinnias but bypassed the hummingbird feeder. Throughout town, leafturn beginning, especially in the maples and the yellow buckeyes. Our viburnum by the north window has become rusty violet-red, and Mrs. Timberlake’s maple is the first on the block to show color. Still one flower on the prairie dock.

2015: In the north garden, the New England asters are glowing against the high orange tithonias. One blossom remains on the High Street prairie dock. Tonight I walked with Kathy at the edge of town, moon above us, and the tree frogs were so loud there, and the katydids so intense.

2016: From Yellow Springs to Lake Keuka in New York State: From almost solid late-summer green in southern Ohio, we drove northeast for 480 miles into a gradual transformation of dusky ochre and then finally in the last 100 miles into more prominent bubbles of pale color in the hills, maples still just isolated flashes of orange and sumacs, fringed with bright red dominating many of berms along the highway. We were at the gateway to Middle Fall; if we had gone further into the northeast, we would have encountered the full breakdown of the year. Foretaste of middle autumn, lush roadsides of goldenrod and New England asters and tall pale violet asters and fields of white asters accompanied us all the way from the warm 80-degree weather of Yellow Springs to the brisk north wind and 60s at the lake.

2017: Gethsemani in the middle of a heat wave (highs in the low 90s and upper 80s): Many signs of drought, perhaps the most obvious a withering weeping willow tree in the garden walk. Only fragments of wildflowers in the woods, some violet asters (large blossoms, alternate, long arrowhead-like leaves, not toothed, with stems. A few white snakeroot clusters and branches of small white asters. As I walked in the woods, suddenly about fifty feet from me: a clattering shower of leaves from a tulip tree.

2018: Before I left for Gethsemani, I heard crows calling right about on time, 6:00 a.m. Sweater weather here, and heavy rain from Cincinnati south all the way to the monastery in northwestern Kentucky, an ochre landscape throughout the drive, with only rare Judas trees and occasional goldenrod, small asters and white snakeroot.

2019: Driving to Gethsemani on the 20th, I saw only a dusky ochre to the tree line. Today, driving back in the rain, it seems to me that fall has come in just the past few days, mixing gold deeper into the ochre. When I arrived at Dayton-Yellow Springs Road, I saw a flock of crows in a cut over corn field, the first cut field and the first crow flock of the autumn. New England asters were flowering in clumps along the fencerows.

2020: Crows greet the dawn, and geese fly over honking as the sun comes through the back trees and a great flock of blackbirds settles in the trees. A female hummingbird comes by to inspect the last canna lily and the new blossoms of the late-seeded tithonia in the circle garden.