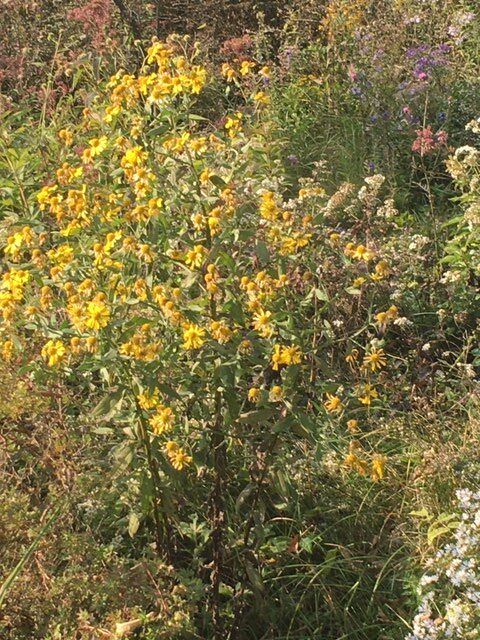 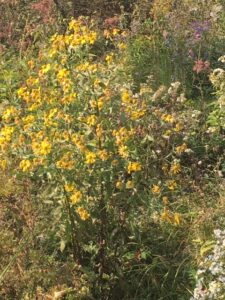 I walked to the Mid-Meadow Trestle and stood watching the sunset, all copper and gold and mother-of-pearl in a mackerel sky. Over all the evening hung a kind of melancholy, for its sounds were all autumnal, presaging the absence of the birds.

Eighty-degree afternoons come five percent of September 26ths; 70s are observed 40 percent of the time, 60s forty-five percent, 50s ten percent. Nine days in ten are clear to mostly sunny, and rain falls just once or twice in a decade. Lows in the 30s, like highs in the 90s, are rare today.

The sugar beet, pear, cabbage and cauliflower harvests commence near this date in the Great Lakes region. Farmers have brought in a good percentage of the third cut of alfalfa, and fall apples and grapes are getting close to a fourth picked throughout the Lower Midwest. In Wisconsin, Massachusetts, New Jersey, Oregon and Washington State, the cranberry harvest begins as berries darken in the cooler weather. Along the Atlantic coast, blue crabs become more plentiful.

1985: About a third of the goldenrod faded. Three monarch butterflies seen.

1986: The white snakeroot, goldenrod, and false boneset are dying quickly. One white autumn violet found blooming in the woods. Squirrels seem to be getting noisier. Woolly-bears and monarchs increasing on Wilberforce-Clifton Road. Another opossum killed last night along Grinnell. Lilac bush reported blooming near Hilt Road.

1987: About a third of the goldenrod has gone to seed at South Glen. It is peak color time for the ash and shagbark hickory, very early pivot for first tier of leaves. More raccoons, opossums killed along the roads. More woolly-bears are out, more monarchs seen. Some beggarticks fading.

1988: A large flock of geese in cornfield stubble along the way to Wilberforce.

1989: The ash at my school window is three-fourths gone, locusts half yellow.

1990: Cascades: Wingstem gone. Creeper is red everywhere now. Yellow Springs Creek is clear, small fish common. Pink and yellow dogwood leaves here and there, but the canopy is whole and still green. Zigzag goldenrod and asters are in late full bloom, some past their prime. Last of the jumpseeds jumping. Touch-me-nots have lost most of their leaves. All the white snakeroot has gone to seed. Crickets and cicadas strong.

1992: Craneflies, tiny, spinning in the sun. Last of the Japanese Beetles die off, only two sluggish ones found in the roses.

1993: Full-blooming Helianthus giganteus along the airport road in a small exotic habitat grown up on land once completely stripped by the road crews. Swamp buttercups full there too, and false boneset, and a last lobelia.

1999: Coming back from northern Ohio, I found the landscape completely changed from what it was just a few days ago. Now the ashes have reached early full color, gold and maroon. Locusts and black walnuts are suddenly bright yellow. Every few miles, a red or an orange maple. The tree line is no longer dusky and worn; it’s coming alive with October color, has a bold, autumnal look. No more ambivalent early September. Soybeans all brown, some being harvested.

2002: Kelleys Island: Fishing for four hours without a bite. High afternoon cirrus clouds, huge circle around the sun and three sundogs at one time. Then at 1:00 a.m., rain and hard wind from the northeast. Wind and rain for the rest of the day.

2003: More than a dozen monarch butterflies on the cutover wingstem in the Butterfly Preserve this afternoon. Honeybees in the small white asters.

2004: A cardinal sang at 6:10 a.m. sharp. No monarchs seen for about a week, in spite of sunny and warm days – perfect monarch weather. All along the road to Huber Heights this afternoon, the woods were in early leafturn, some ashes at their peak, box elders, silver olives and catalpas pale or yellowing, many cottonwoods down, some full gold, many maples bright orange: a major change from just a week ago when I went to Gethsemani. Throughout the day, hurricane Jeanne battered Florida.

2007: Starlings in the Stafford Street tree. In the alley, robin migration song: a small flock is passing through. The alley goldenrod is all rusted.

2008: The drive to Gethsemani in Kentucky under streaks of cirrus, lines of altostratus: Flashes of red sumac in the dry roadsides, and up into the hills, fluff of seed heads to the horseweed, late goldenrod, yellowing redbuds and honeysuckle, cottonwoods bare, bright orange maples, patches of purple New England asters, cluster of small white asters, empty tobacco fields with a few stalks left like standards from a battle, corn and soybeans brown, buzzards floating overhead, but not a single flock of starlings or grackles. West into Kentucky, the hills are dull with drought. Maybe half a dozen adolescent raccoons seen killed on the highway.

2011: Gethsemani to Yellow Springs in the morning rain: the landscape turned so much since I drove along here three days ago, an ocher landscape now, golden green with mist and clouds, blurring, blending, mixes, intensifies the changes that happened almost overnight. North along the freeway, emerging into Sun and turquoise blue, white cirrus and choppy cumulus and dark purple stratus blowing in the southwest wind. At home, one monarch in the zinnias, all the New England asters in full bloom, zinnias and stonecrop and mums and boneset holding the garden together. Large patch of chicory noticed on the way to Beavercreek. No katydids heard on my walk tonight, but intense cricketsong.

2012: High, intermittent crickets at 6:00 this morning Driving towards Dayton, I found the highway tree line turning quickly, the ashes suddenly becoming purple, more maples joining, sumacs red and cattail foliage yellowed along the freeway, a tremendous change in just two or three days. At our pond, the green frog, Romuald, was sitting out on the rocks at noon. At Ellis Pond, the ashes have turned from dusky violet green to deep purple, the sweet gum is dark red, one scarlet oak is completely red, and a second is starting. All about me, everything is happening at once. And the pond geese, when I have come by the past few evenings, have been engaged in raucous conversation, squawking and honking and bleating. (And the shopping-center pond was full of geese this morning.)

2013: Ashes are turning throughout the region now, complemented by early maples. One hummingbird and a fritillary noticed today at home. False boneset completely gone to seed. At Ellis Pond, the ash groves have turned a deep green-purple, and half of one red maple has turned orange, one fringed on the top with color. No change in the oaks, the sycamores, the yellow poplars. Small white asters, a few orange jewelweed and a handful of swamp bidens are blooming, but all the other beggarticks and shore flowers are gone. One darner with powder-blue stripes on its wings flew along the bank of the pond. Later, weeding in the garden, I disturbed one black and brown woolly-bear caterpillar.

2014: Last night, mild, full insect chorus: tree frogs intermittent steady, static of the tree crickets steady, chirping field crickets, rasping katydids. Today, sun and warm: cabbage whites and painted ladies throughout the zinnias. In the pond, the arrowhead leaves are tattered from caterpillars and simply old, collapsing into the water. Scattered maples in town are turning red and orange. In the field around the Antioch Farm, many yellow sulphurs romping and mating.

2016: Only one or two silver-spotted skippers today, cabbage whites still common. No larger butterflies seen even though the New England asters are completely full. At the corner of High and West South College, the prairie dock has finished blooming, Large Osage fruits have shown up on sidewalks and in the streets now.

2017: Sun, heat: Two or three monarchs, two or three painted ladies, many cabbage whites, one or two silver-spotted skippers seen off and on through the day. In the afternoon, I heard robins, the first time since they left in July, and I saw a hummingbird in the shaded zinnias.

A message from Rick: “Was still dark at 5:30 am, morning of 9-26 when I stepped out back door and saw several glow worms still active around the pond.  Unusual, I thought, as the temp showed 45.  A few much warmer nights earlier, the 24th I think it was, I looked out to see a scattering of glow worms flashing away in the gravel area between house and garage (they must be everywhere, though easier to see amongst the gravel), walking among them like walking across a star strewn sky.”

2019: Once again, a mild and sunny day, cradling clusters of painted lady butterflies, cabbage whites, monarchs, silver-spotted skippers, an occasional sulphur, one spicebush swallowtail. Now the tall goldenrod is darkening, and the knotweed flowers and the last phlox blossoms are suddenly gone. The New England asters and the zigzag goldenrod are still at the height of their color.

2020: A few geese calls overhead at dawn. In the garden, September slipping away without butterflies! Except that at noon, I walked out to find an ancient great spangled fritillary splayed resting on a pink zinnia. And once again, I surprise finches in the tithonias.

In the course of each of the four seasons, inevitably, if the good weather continues for a period of time, rain, wind or snow follow. One must always think of the changes in heaven and earth. In the same way, one must be prepared for changes in the mind of a person….