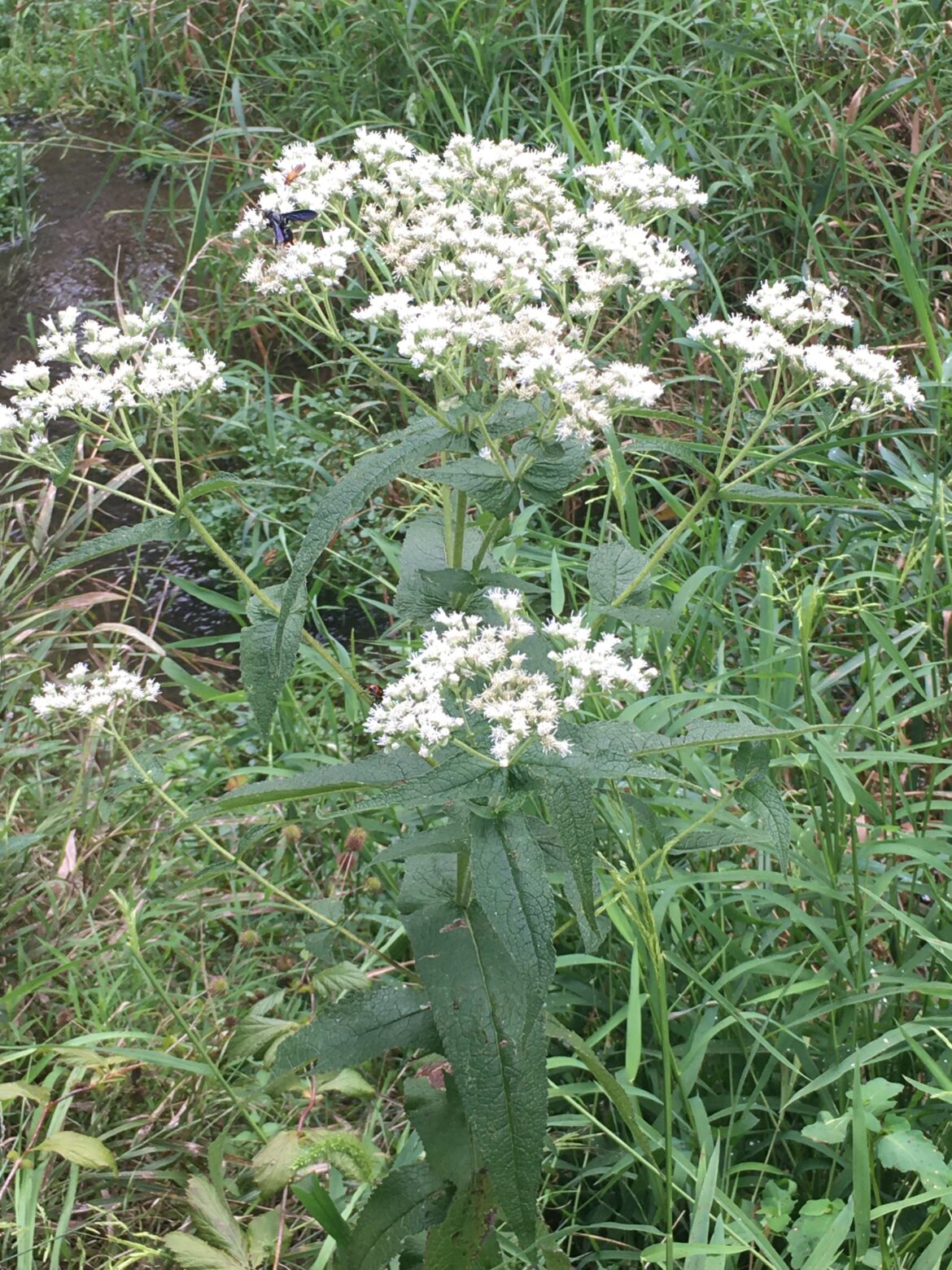 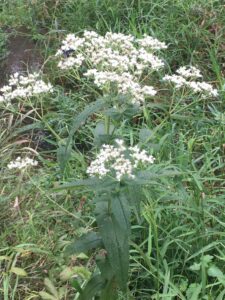 The garden air is full of the sound of crickets, the year’s clock made audible, ticking off the days.

The sun almost always shines today, and temperatures are typically slightly warmer than yesterday’s: 55 percent chance of 80s, and 35 for 70s, ten percent again for 90s. Half the nights fall below 60, but frost almost never occurs. Early autumn, however, often arrives by the end of the day with a cool front and a storm.

As Ragweed Season disappears, Red Berry Season begins for silver olive shrubs, Orange Berry Season for the American mountain ash, and Purple Berry Season for the pokeweed. Yellow Soybean Leaf Season and Corn Silage Harvest Season change the fields as Puffball Mushroom Season grows in the woods. Now the High Season of Blackbird Abundance coincides with the end of Dove Calling Season. And this week ushers in the Season of Early Fall, which lasts until Peak Maple Color Season announces the Season of Middle Fall.

1984: Tulip poplars and cottonwoods have large gold patches of leaves now. Crab apples have lost much of their foliage.

1987: Robins and starlings in the yard this morning, and crows, blue jays in the distance. The ash at my window is three-fourths turned and losing leaves. Some foliage of the maple in front of the house has come down. Woolly bear caterpillars common as I came home from work, all of them light or dark orange, no black stripes. Katydids still strong tonight. Large flock of geese lands on the college green.

1988: When the woolly bear caterpillars finally appeared this year, they were dark, some reddish, some dark brown. Last year’s winter was a mild, dry one. Will this year be different? Vern Hogans, the local cat fisherman who forecasts by the thickness of the catfish skins, says cold.

1989: Crickets and katydids still strong in the warm evenings.

1993: Boneset has rusted in the swamp and false boneset along the highway in just the last few days. In the yard, some white and red phlox hold. The pink spider plant continues to come in. The ironweed planted from seed this spring is still early full bloom. Most cosmos killed by the drought, zinnias holding pretty well. Spiderwort still strong.

1996: The iron plant (mother-in-law’s tongue) has finished blooming after having flowered for about two weeks.

1999: The sun continues relentless, the earth so dry in the drought, everything withering prematurely. I haven’t cut the grass in over a month. Pond koi still active at their summer level, feeding heavily. Two monarchs seen today.

2003: Monarchs seen throughout the day in the zinnias. The flowers of the earlier virgin’s bower have turned gray, but the later plants are still bright and in full bloom.

2005: To Amish country northeast of Columbus: Many patches of orange and gold on maple trees along the highway, several maples completely turned. Most of the soybean fields and the stands of tall goldenrod are turning. At home, a few serviceberry trees have lost all their leaves. Together with the black walnuts, the serviceberries make up the first tier of leaves to fall.

2007: Buds on the Jerusalem artichokes are straining now, will open any day. A cardinal sang at 5:53 a.m. – only one call, then silence. Crows heard briefly at 8:20 as we walked Bella through the alley. Mateo’s black walnut tree is about 90 percent down.

2010: Crows at 5:45 this morning, one faint cardinal call at 5:55. Lil’s burning bush is deep red on the north side. The white autumn crocus on the northwest corner of the back veranda has started to bloom. Mateo’s black walnut tree is about bare.

2011: Return from Goshen, Indiana beneath patchy clouds, high cirrus undercut by fair-weather cumulus and then threatening stratus, a few raindrops, temperatures into the middle 70s, cornfields browning, bean fields turning gold, some corn cut for silage in the drier areas of northern Indiana. A few monarchs seen, long drifts of goldenrod, full bloom of virgin’s bower in the villages, several great flocks of starlings. At night in Yellow Springs, full chorus of tree crickets, a few field crickets, katydids in front of Gerard’s and down near Lawson Place, but none along my section of High Street.

2012: The zinnias, New England asters, the false boneset, the fresh, white autumn crocus by the back porch, the virgin’s bower (newly blooming this year, climbing volunteering through the trellis above the wisteria and into and up Janet’s redbud) all full of small butterflies, especially painted ladies now. I have not been able to watch for hummingbirds, but their sugar water continues to go down. They are still here.

2013: Katydids calling until 5:15 this morning, just as the sky was starting to lighten. A brown and a monarch in the garden at about 9:15 this morning, one more monarch late in the afternoon. Along the road to Wilmington, goldenrod is in full bloom, more and more cornfields brown, more soybean fields yellow, a deeper weathering of the woodlots. One small murmuration of starlings seen. Heat wave continues, highs in the 90s. Casey says that honeybees are swarming around the small flowers of the ivy plant that covers the side of his house. He reported something similar last year or the year before.

2014: Hackberry leaves have started to fall in the back yard, joining the cherry tree leaves. Black nightshade still blooming in the front hedge, full of green berries. Diana called: She saw a white goldfinch (black around the eyes, black markings on wings and tail) at her feeder at 1:00 this afternoon.

2016: Yesterday’s rain seems to have loosened foliage from a few trees, ridges of walnut leaves gathered along Davis Street, a wide scattering of brittle cottonwood leaves on Greene Street near Jill’s house. Hackberry leafdrop increases in the back yard. Another quince fell on the bedroom tin room in the middle of the night, the quince clock striking the early evening of the year. Leah came into the store today, said there had been hundreds and hundreds of little toads crossing her front yard this past week. This afternoon, a violent line of storms crossed the Midwest with heavy rain, thunder and lightning, bringing the first cold front of the early autumn.

2017: Returning from Hopewell, Virginia: One painted lady butterfly in the zinnias (only two butterflies of any kind seen on the drive and throughout my stay in Virginia). In the Appalachians, goldenrod and Jerusalem artichokes most common, many blanched sycamores and Judas maples along the freeway at upper elevations. At the fishing site along the James River: wild virgin’s bower quite late bloom, beggarticks just beginning. Throughout the countryside from West Virginia into Ohio, soybeans fields show patches of gold.

2018: Cleaning up after the Hurricane Gordon rains: All the taller castor beans were toppled, and the Mexican sunflowers had leaned over the zinnias, covering them with orange. The circle garden’s lush tangle of castor beans and zinnias, Mexican sunflowers and morning glories collapsed, and I had to cut away most of the plants. This cool, wet evening, no katydids heard, even though the crickets were screeching and buzzing. Geese flew over honking at 7:10.

2019: The hummingbird still comes to the feeder. One ragged Eastern black butterfly at Ellis. Driving to the shop, I almost hit two black buzzards that were eating a squirrel that had been run over on Dayton Street. Not only have the black buzzards moved into the area from Kentucky, they are becoming citified. The coffee trees downtown are shedding quickly now.

From a half hour north of Yellow Springs, Chris Walker writes: “I have been seeing nighthawks for the past two or so weeks.  At first they were way high, but I recognized the wing profile and stripe.  Yesterday I drove home for work and saw about a dozen of them, flying low over the road. I used to see these a lot when I lived in Nashville, but never up here.  However, according to a range map, they’re not unusual around here.” His report supports the few other observations I’ve had at this time of year, the first one being from Rick and Mary on August 27 in 2009.                                   Carol Cuthbertson also reported seeing nighthawks at her property on Garrison Road north of town this evening, as well as a great cloud of dragonflies, the nighthawks swooping back and forth, feasting. A friend of Carol’s in Yellow Springs saw the dragonflies tonight, as well. Is this the exact time (more or less), then, that the dragonflies appear in great numbers throughout central Ohio and that the nighthawks accompany them?

and crickets that sing in bedroom curtains.