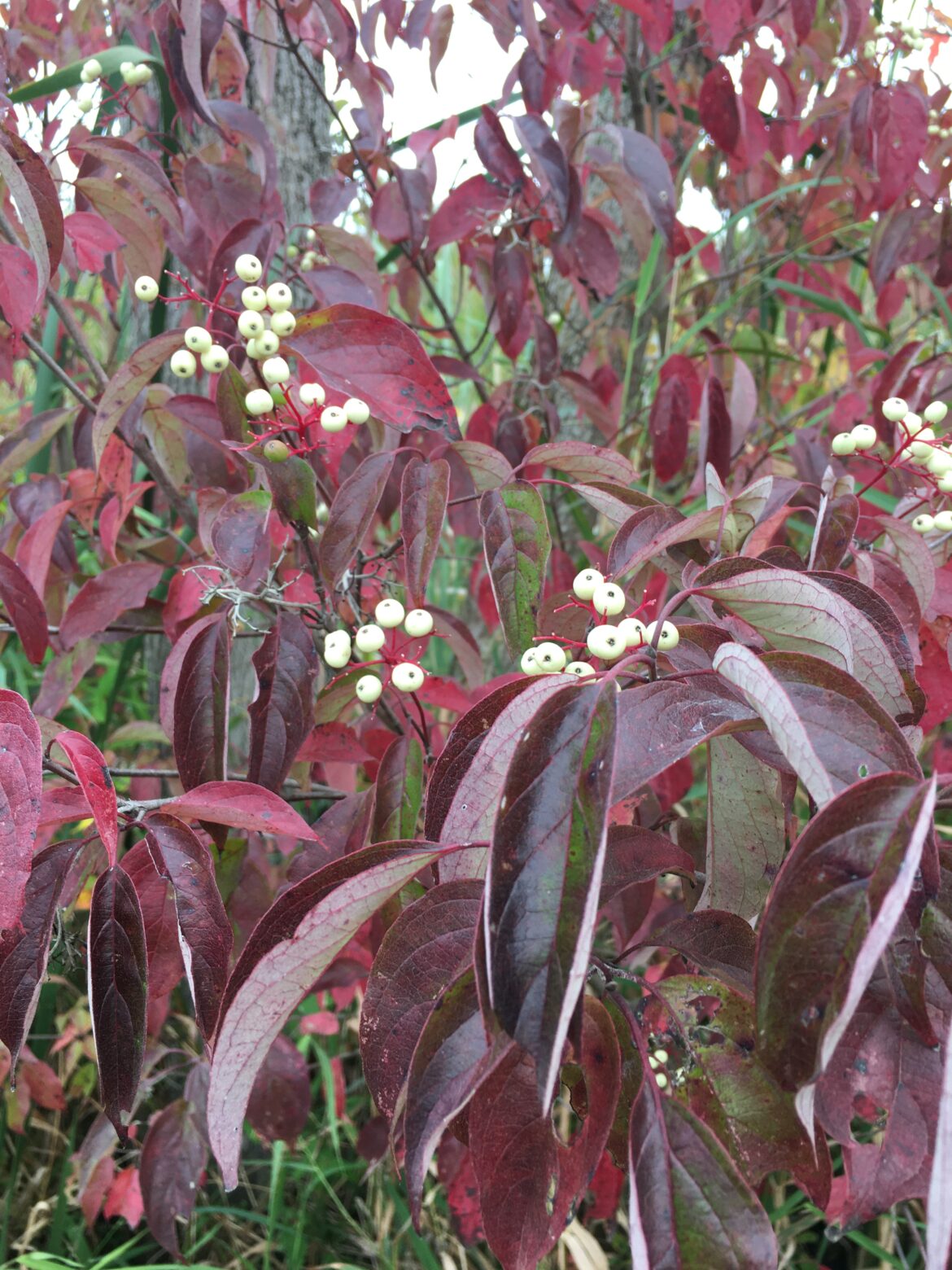 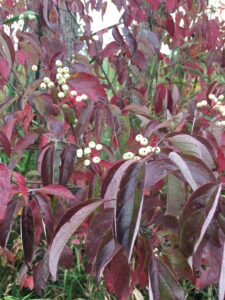 Today and the 21st are the two October days most likely to bring clouds – completely overcast conditions occurring half the time. Rain is also likely – showers or all-day drizzle occurring six days in ten. And the first flurries of the Ohio season sometimes fall on this date. Highs warm to the 80s five percent of the days, to the 70s fifteen percent, to the 60s thirty percent, 50s forty percent, and 40s ten percent.

Most of the commercial grapes and apples have been picked by now. Half of the winter wheat is normally in the ground, and a fourth of it has sprouted. Most of the soybeans are mature, and many bean and cornfields have been cut clean. Farmers often apply nitrogen, phosphate and potash now in order to decrease their springtime workload.

1983: More and more ash leaves fall along Grinnell. Rain and wind deepen the sense of autumn.

1984: Radical leafturn on one ginkgo tree outside my window.

1989: To West Virginia: Now it seems to be early peak leaf color just before the real decadence of full Middle Fall. Many catalpas are down, beans dangling. Occasional ash, box elder, tree of heaven, some poplars and sycamores almost bare. Shagbark hickory golden. Black walnuts have dropped their leaves, fruit still hanging. Most all the goldenrod is done blooming, brown but not gray yet. Lush violet smartweed noticed at a rest stop in southeast Ohio, some red clover. All corn and soybeans unharvested. Clumps of mums in the towns. In the foothills: New England asters against a bright green pasture. Crooked stem aster found at rest stop near Athens, Aster prenanthoides. Small white asters very common. Patches of Queen Anne’s lace. Sumacs red 30 miles from Athens. Some snakeroot, some jewelweed seen along the road, and banks of low, red, sumac, whole waysides full color, then gaps where the leaves had fallen. 1998: Heavy walnut fall now. Squirrels hard at work.

1999: Yesterday I finally paid attention to the scrub maple that was so gold and orange outside my west window. It had been hidden all summer by a box elder, by some honeysuckle bushes and euonymus vines, shaded by tall locusts and Osage. I had occasionally glanced at it over the past week, noted its turning, but now I saw it push boldly out of hiding and reveal its brilliance. I had dismissed its beauty before. And then yesterday, just before its foliage collapsed in the rain, the maple showed itself completely to me.

2003: Blackbirds clucking in the back trees. Lil’s maple and the Danielson’s maple are both near full color today. Mrs. Lawson’s maple is full and shedding. Janet Hackett’s redbud in the north garden is all yellow. Ash, maple, and locust leaves are falling heavily in the breeze this morning, lie in clumps and rows in the streets. It is the early peak of middle autumn.

2005: Katydids and crickets are singing in the warm dry night.

2007: An orange and black woolly bear caterpillar crawled across the back patio at noon. The largest painted lady (Cynthia) butterfly I’ve ever seen came to the zinnias this afternoon.

2008: Crows at 6:30 this morning. Warm 80s today, sun. The sugar maples near Limestone Street are deep orange and maroon now, even starting to shed. The rest of the maples near our house are still mostly green. All of our New England asters have faded today. One monarch butterfly came by early in the afternoon, sailed over my head, the Sun shining through its wings. Eighty daffodils planted along the north wall as the Sun went behind the west trees.

2010: Crows at 6:22 this morning, high near 80 expected today, maybe rain tomorrow. The Danielsons’ maple is half turned, but the rest of the maples on the east side of the street are still green. Lil’s burning bush is about three-fourths turned. On the north side of our house, the viburnum is a dark rust.

2011: Crows heard at 6:30 this morning, light rain and about 55 degrees. Walking Bella at 8:45, I heard more crows and steady high tree crickets. And Peggy’s field cricket was loud, too. Moya’s tree of heaven is yellowing and shedding. All the redbuds in the neighborhood are gold and starting to come down. Maples are bright but going quickly. The viburnum on the north side of the house is full red and dropping its leaves. The Korean lilac is a pale orange and mauve, a few of its branches showing purple flowers. Only one rose of Sharon flower seen. One pink and one yellow tea rose in bloom, and the Knockout roses remain lush in full bloom. Many of the mums are wilting now, and the New England asters are closing. Dahlias producing the most full and beautiful flowers of the year. Crickets are much less prominent tonight than last night, fewer windows of grating crickets, a few tree frogs, a few field crickets, one wavering castanet cricket, no katydids at all.

2013: Northern Indiana: Early full color all the way from Yellow Springs to Angola, Indiana. Mild temperatures near 80, clear skies finally clouding up at sundown. On the side of one tree near the lake, red box-elder bugs had hatched and were massed along the bark, the cluster maybe a foot long, three inches wide. Walking along the lake, we saw numerous red-winged blackbirds, probably migrating.

2014: Cardinals singing and robins peeping as I walked Bella just before 8:00. Chilly, sunny morning, becoming milder and cloudy in the afternoon, still bright and warm enough to bring out a few cabbage whites and painted ladies. Carl’s maple is the most spectacular now, full gold-orange. The Danielsons’ maple leads the east side of the street in gentle gold, followed by Mrs. Timberlake’s. The patch of orange on Moya’s maple next to my yard grows larger and larger.

2016: Sun and warm in the 70s today, very little butterfly activity for a while, but patience finally paid off with a few: one bright orange polygonia, three silver-spotted skippers, a pair of cabbage whites, a glimpse of an azure. Throughout the village, the maples are yellowing; the park is a gentle ochre, the walk under the canopy golden; white snakeroot is done blooming at John Bryan Park.

2017: Yellow Springs and northwestern New York state, temperatures cool in the 60s, breezy, clouds. Early Middle Fall along Keuka Lake – greener than the mountains to the west. No frost in Ohio or west to the ocean, no frost in the long-range forecast.

2019: First frost on Jill’s car this morning. Chris reports ice from north of here a ways, and Mike had frost in Oxford. Sun and high only in the middle 50s this afternoon. One small painted lady seen in the zinnias, no monarchs for several days. Early Fall has finally begun in the countryside with patches of rust and gold blending with the ochre of September. At least six sizeable murmurations of starlings seen as I drove to and from Cincinnati, and at home, the sparrows were loud and nervous, flocking down to feed, up at the slightest alarm, down again chirping the whole time. From Lanesboro, Minnesota, my nephew John sent photos of his lilac bush in full boom, the first time he’s ever seen the second bloom.

2020: The hill…is a voyager standing still. Never moving a step, it travels through years, seasons, weathers, days and nights. These are the measures of its time, and they alter it, marking their passage on it as on a man’s face…. Time is told in it mutely and immediately, with perfect accuracy, as it is told by the heart in the body. Its time is the birth and the flourishing and the death of the many lives that are its life.

From “A Native Hill” by Wendell Berry

Ed Davis got me started, sending me the quotation above. And I sit on the back porch this evening, watching birds, images and feelings moving across me in waves. I am the “voyager standing still.”

The day before, a friend had told me about a poem in which a meditator sits with Jesus until his ego disappears and only Jesus is left. Wrapped in sensation, I become the hill. I become the Jesus of the poem, losing myself in the autumnal measures of time:

All day long, the peak of maple color spread across the town and countryside. I would actually like to sit with Jesus, but he’s gone, leaving me behind with my stream of consciousness. Sweet and painful memories, suppressed, shelved, superimposed on sensations of autumn passage. At my feeders. sparrows alternate with black-capped chickadees, with aromas of plants and fruits I can’t name or recall, layers of other autumns, the flickering of years that have no names.

In the garden in front of me, three small, orange Mexican sunflowers stand bright against the neighbor’s dark woods. Two pink canna lilies remain from the summer. Earlier in the day, I had seen that almost all the leaves of TK’s maple tree were down, that the Danielsons’ maple had turned overnight, that Lil’s tree, the latest maple on my High Street block, was suddenly ochre. It seems that keeping track of one tree or another over the years keeps the collapse of summer more manageable. It is enough that these particular trees come down, parts for the whole, short-circuiting the awareness that everything is falling apart; only these trees are dissolving.

I write down what I see over and over again, unable to catch the anniversaries that seem to land on me and crawl across my body, gathering up the spent seasons, cementing and then letting go of the mottled shrubs to my right that are matted with yellowing hops and false buckwheat and knotweed. In all my notes: the frustrating absence of enough or the right words that would allow meaning to emerge, the absence of sharing that would allow my true emotions to reveal themselves.

My ego pursues meaning, existential explanations about role and persona and value: these, too, are late flowers brought in from the coming cold, seeds saved and set aside in old envelopes, leaves salvaged to press. Now the sunset though the backyard trees matches the dusky, sweet-peach breasts of my October chickadees, measures the time against Berry’s hill, and at dusk I prove to myself once again that I exist, and that I look for God, wondering if the geese fly will over again in the early dark like they did yesterday, so many things still unnamed, unworded for winter.

Different atmospheric conditions – different kinds of weather – are, precisely different moods. Wind, rain, snow, fog, hail, open skies, heavy overcast – each…affects the relation between our body and the living land in a specific way, altering the tenor of our reflections and the tonality of our dreams.