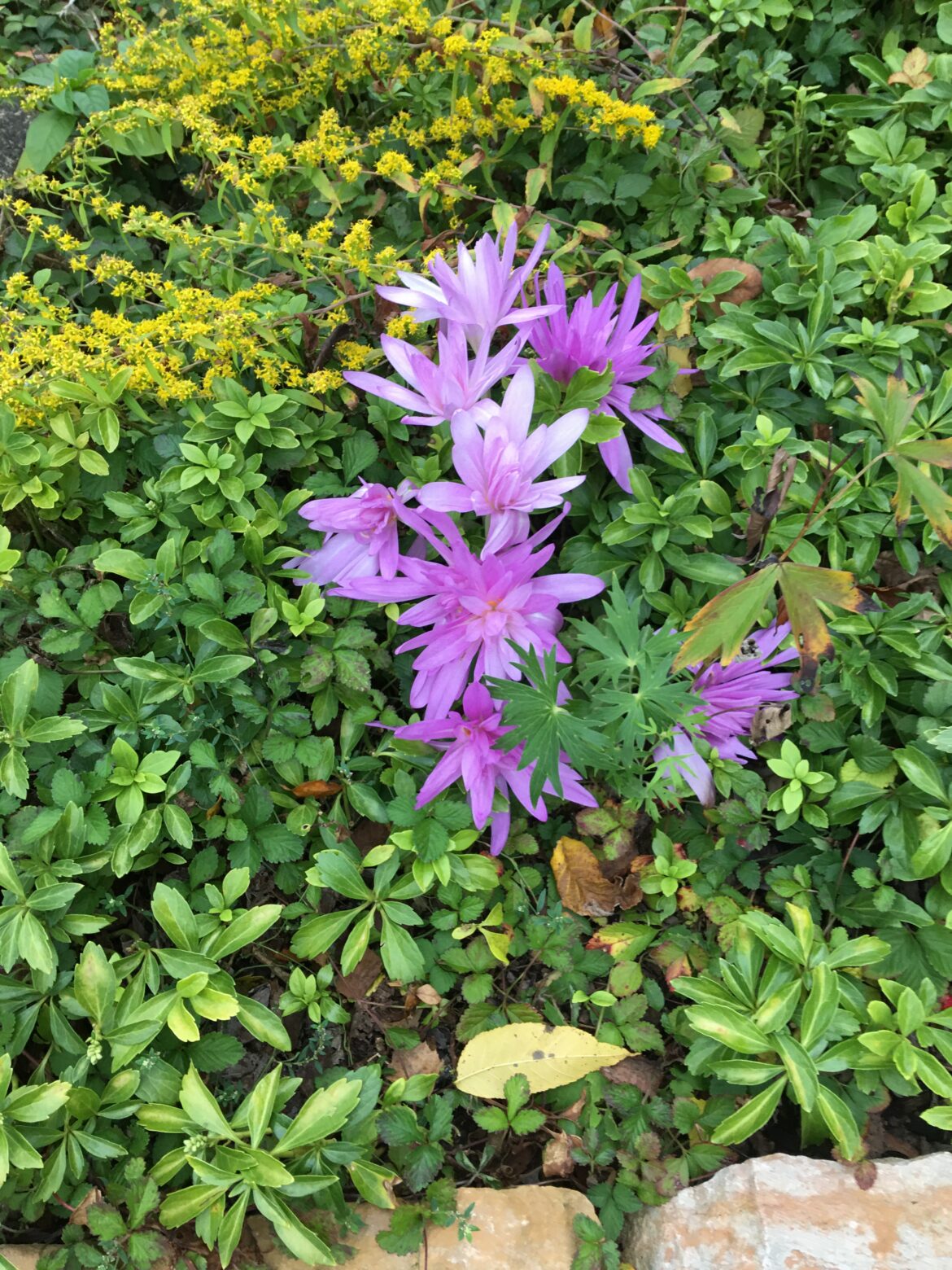 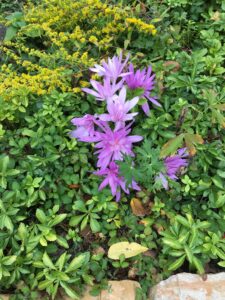 just so, the color of

New England asters and false boneset are still bright as goldenrod becomes tufted and gray to the sound of starlings in the trees. Spicebush is yellowing as the ashes enter their full color season. Box elders are shedding. The toothed leaves of beggarticks darken purple overnight. Daddy longlegs disappear from the undergrowth. Bird migrations reach their peak throughout Ohio.

1984: To the Ohio River: Trees stable throughout the trip, some fading along the shoreline. Colors of the foliage depended on the species, not on the distance south. Major changes only in the low sumacs (bright red now), the ashes (turning dusky violet), and the hickories (yellowing). Goldenrod is in full bloom, along with the white snakeroot, asters, and Queen Anne’s lace. Some tobacco was hanging in barns, some being harvested, some still in the fields.

1988: The drought earlier this year seems to have given energy to the goldenrod and asters. They seem brighter, more abundant to me than in previous years. The woods are still rich with golds and blues, the integrity of the flowers distracting from the slowly disintegrating canopy. Green acorns all over the paths at the Grinnell Swamp upper habitat.

1989: Starlings chattering in the afternoon trees at Wilberforce.

1992: Full breakdown of the landscape just before Middle Fall. At the Mill, all the wingstem is gone, many goldenrod rusted, a few asters to seed. Wood nettle leaves are curling, a new stage of decline. Still a few bellflowers (they must have been broken off in the summer, grew back, bloomed now). Still a few jumpseeds. Thin-leafed helianthus done along Springfield Airport Road. Touch-me-nots at Grinnell have all faded. No ironweed noticed. Cicadas are silent now. As the temperature dropped into the 30s tonight, the crickets grew quiet. No katydids.

1997: Cardinals singing off and on throughout the morning. After last night’s wind, the pond and back yard are full of yellow locust leaves. Japanese beetles still eat the sundrops and roses.

1999: This morning, I looked out of the greenhouse window just as a squirrel leapt up into the air over the pond, and one of the large koi splashed. Was the squirrel just getting a drink, and the fish scared it?

2000: Steady drizzle of deep yellow locust leaves. Full turning of the ash. Last jumpseeds jump in front of the house. Some of the New England asters are done. A deep gilding taking place throughout the canopy. Large flock of grackles, thousands, heading north toward Springfield at 6:30 a.m.

2001: Cardinal at 6:10 a.m., sang off an on for an hour. Crows came and went. Robins peeping their migration song outside in the honeysuckles now at 7:04. The goldenrod is aging in the north garden, the last of the flower seasons turning.

2003: Portland, Oregon: The leaf-turn seems about the same in Portland as it is in Yellow Springs. Only light shading of maples here and there.

2004: Antioch School students banded numerous monarchs in Chillicothe – no shortage of those butterflies reported there.

2007: Gethsemani: This past weekend, I drove into Kentucky through the full range of Early Fall, its different subseasons depending on how the soybeans or corn or goldenrod or tobacco, harvest complete or pending, blended with the tree line.

The specific time of year also hinged on the number of fragile ashes along the roadsides, or the advance of the violet Virginia creeper, or the number of box elders, catalpas, tulip trees, sycamores, crab apples, sweet gums, cottonwoods, locusts, hackberries, redbuds or early maples and pears and oaks in any given location, late September revealing itself only partially as a function of the slant of the earth, each species of tree following its own calendar.

I uncovered micro-seasons of place from mile to mile that showed me topographies of rainfall in the dun or the green of the roadside grass or the sharp rust of vegetation killed by drought, the variety of habitat within a range of 200 miles, observed only from the road, suggesting the wild complexity of just a few hours in one autumn day.

My moods rose and fell while each yard, field and woodlot opened temporal and spatial cross section after cross section, created a process of definition and redefinition in which the borders of this particular day continually shifted and were transformed, as though the inevitability of winter were irrelevant, as though it were a kind of game in which natural history became simply a matter of belief and disposition.

As far as the ashes – they have made part of the trip the peak of Early Fall, the near side of the best. Their leaf fall will begin next week, will be over for them by the 10th.

At Gethsemani, the landscape was almost completely in Late Summer. Even the wingstem was soft and bright. Some decay in the false boneset, the white snakeroot and winged snakeroot and tickseed sunflowers, but the impression was more of the end of August than the beginning of October. And everything definitely behind the 18th of 2006 when I was here. Butterflies everywhere throughout my walk to the mountain. One tiger swallowtail, several blacks, some painted ladies, a hackberry and an assortment of others I couldn’t identify.

2008: Cicadas sang in the warm, sunny afternoon. Katydids were calling when I walked Bella at 6:30 this evening. A red squirrel, the first I’ve ever seen here, explored the shed today.

2009: Cardinal sang in the cloudy morning, 6:24, the latest so far this year. Crows followed. This afternoon, Jeanie found a giant wheel bug, Arilus cristatus, on the north screen. Soybean fields are rusty brown along the road to Xenia. Early leafturn throughout the area. Sudden decline of the Jerusalem artichokes after just a couple of days at their best. White fall crocus has toppled over.

2010: Clear and cool this morning, crows at 6:20. By midday, the butterflies were back on the butterfly bushes, two or three monarchs and a handful of silver-spotted skippers. Late in the afternoon, two more monarchs seen, this time on the New England asters, and even one male tiger swallowtail on the zinnias.

2011: Strong crickets this evening, but no katydids. Temperature near 60 after a day in the low 70s.

2012: A soft, blue day, sun and cool, yesterday’s fog did not return, only high altostratus filtering the sun as we sat at the school and listened to eulogies of Jeanie and memories, and I cried and cried.

2013: At the Cascades: The canopy gilded and thinning, showers of mottled maple leaves. Blue stemmed goldenrod and Short’s asters the only flowers in bloom. Intermittent thumps of black walnuts dropping to the ground. The sound of the waterfall enhanced by the opening of the high trees and the undergrowth. Crows and a pileated woodpecker and steady cricket trills.

2014: Crows at 6:22 this morning. Worked in the garden with Tat transplanting day lilies. At least two monarchs seen, and numerous painted ladies, only a few cabbage whites. Showers of locust leaves through the afternoon.

2015: Campello Alto, Italy: Rosemary in bloom beside a deep patch of yellow autumn crocuses and then violet crocuses in abundance along the old railroad tracks; also chicory, many hawkweed in bloom, blue vervain-like plants, white campion (Silene latifolia), an abundance of Jerusalem artichokes. Fully formed acorns on small-leafed oaks. One field of sunflowers still in full flower in the Umbrian hills above Montefalco. Tobacco yellow-green, and being cut in one large plot. The grape harvest here has begun: tractors pulling carts full of grapes on the highways. The landscape, not quite as ochre as in Ohio, is still dusky Late Summer. Spoleto at Ivano and Neysa’s: pomegranates not quite ripe, maybe twice the size of golf balls. Ivano’s parents brought us freshly pressed, Succo mosto, pre-fermented grape juice, thick, sweet, rich.

2017: Another cool day, morning low of 44 degrees. When I went out to the garden before work at 9:45, two painted ladies were sampling the zinnias. At Ellis Pond, the large ash grove still kept maybe a fourth of its leaves, but the ashes that had been dark purple a week or so ago were bare. Sun and mild throughout the day, crickets and katydids exuberant in the clear evening, gibbous moon clear and high in the southeast.

2018: Not a cloud today, chilly, fire in the stove, monarchs and cabbage whites in the tithonias and New England asters. One polygonia butterfly in the dooryard and a small checkerspot in the zinnias. Not a single painted lady butterfly seen this summer and fall. The woods full of asters and goldenrod, paced at home by the New England asters. In the milkweed, the red and black milkweed beetles gradually grow larger, reach maturity, leave their clusters to explore the whole milkweed plot. No hummingbird seen today.

2019: Hot and sun. Three painted ladies at one time in the zinnias. Only a monarch once in a while. I didn’t see the hummingbird today. Soybean fields mostly dry and brown in the local countryside. Crickets still vociferous at night, katydids not as common in the neighborhood.

2020: With new moon on the 17th and lunar perigee on the 18th, the strongest high-pressure system of the summer moved in abruptly, reaching 30.50 on the barometer, bringing a cool and sunny week. My graph of barometric pressure showed the peak on September 20 and then a quick decline on the 21st. then a more gradual slope from the 22nd through the 25th, the barometric needle barely moving from day to day, the record of that period appearing as a plateau across time. And the weather remained sunny and dry throughout all of that, highs in the middle to upper 70s, lows in the 40s and 50s, perfect Early Fall weather, perfect butterfly weather (if there had been butterflies).

Then on the 26th, the atmospheric tableland suddenly collapsed into a gorge, the barometer dropping from 30.10 to 29.75, the humidity rising, clouds moving in. The morning of the 27th was gentle, fine for working outside. I cut a little wood, weeded the north garden. Then came a hard rain at three in the afternoon and the barometer bottomed out at 29.70 and then started to rise, leaving the first major chasm of autumn on my graph.

This morning is bright, misty, chilly, fresh after yesterday’s storm. Black walnut leaves and locust leaves all over the streets and sidewalks, the ochre landscape deepening with moisture, more maples, it seems, turned orange. Adverse to heights, I reflect on the visual record of the recent stability and the violent plunge, allow myself to go back to relive the gentle descent of the dissipating high-pressure system, resting on the quiet floor of the prelude to fall.

This afternoon, dark clouds, three vultures way high over the village, circling. At Ellis Pond, the ash grove has turned dusky purple, and the algae that lay across the water throughout the past month has almost disappeared, countered by the rain and chill. Tonight as I walk Ranger along Stafford Street: drizzle and wind. Prelude: the full moon is coming on October 1.

All are but parts of one stupendous whole,

Whose body nature is, and God the soul.