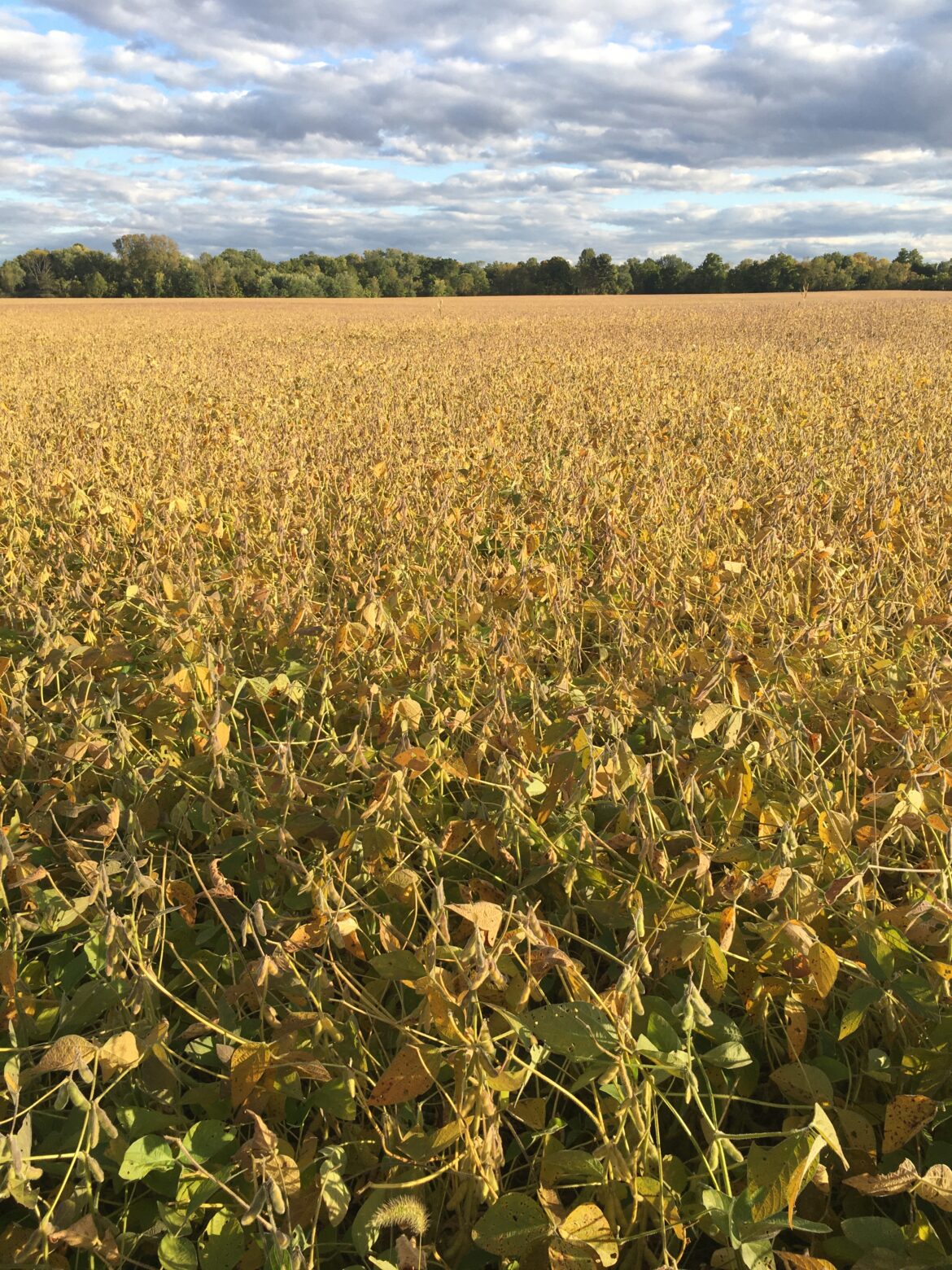 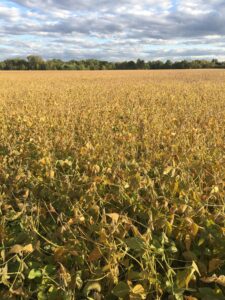 The stars are down close to the trees,

The air crisp, no wind, no cricket or bird.

Highs reach 70 five percent of the time, climb into the 60s ten percent, into the 50s twenty percent, the 40s forty-five percent, the 30s fifteen percent, stay in the 20s or teens five percent. Chances are good there will be no precipitation: the 18th is one of the driest of November days: rain just once or twice in a decade, with the same possibilities for snow. The sun shines two days in three, and frost strikes a little more than half of the mornings.

The silver maples and the oaks thin out. Forsythia turns deep red and gold from frost. Poplars shrivel. Most mock orange leaves and most of the lilacs are gone. Sometimes half the ginkgo seeds hang on above the golden skirt of their fallen foliage. The beeches and pears and willows weaken. Osage fruits are almost all down, stand out chartreuse, at random, in the tangle of the undergrowth. Cypress trees have thinned, their branches a delicate web against the sky. Pink coralberries glow in the hedges. Bittersweet berries crack and reveal their softer cores.

1989: All leaves from the south poplar gone. Two blossoms open on the white Christmas cactus.

1990: Walk down Polecat Road at dawn, violet sky streaked with pink and red contrails and cirrus. Frost across the fields, black cattle in the gray-blue pasture. Geese and ducks going over. Then, from the west side of the railroad tracks, two shots from a shotgun, and a goose, flying to the left of one formation, veered down into the trees, crying out when it struck the branches.

1991: Geese still fly over the village. Starlings are still gathering at the back trees. A late flock of bluebirds passed by on the 17th.

1992: Some pear trees in the village are brown and losing leaves, but others are full green, untouched by Late Fall.

1993: At South Glen, the paths stay green in spite of the cold, contrasting with pale brown fields beside them. Osage fruits are almost all down, stand out chartreuse, surreal, at random along the river walk. One coralberry bush glows pink. In the lower prairie, a patch of black-eyed Susans with gray foliage, petals gone, centers so black. Silver olive leaves have fallen in the past week here. Downtown, the pear leaves come down quickly in the sun.

1994: Jacoby Swamp: October and November have been mild and sunny this year, and the forest floor looks like it does in spring. Garlic mustard has grown four or five inches tall, its leaves wide and bright. Chickweed has come back all along the paths, cress in the pools and streams. Grasses are returning. Skunk cabbage is showing all over the swamp, some plants even opening a little. Today’s sun sets the new plants glowing like they glow in April, and the blue sky and the intense green, the fresh scent in the air, one yellow sulphur butterfly at the landing, all say that it’s spring.

1997: Sparrow hawk seen on the phone line along Wilberforce-Clifton Road this afternoon. Neysa reports the sparrows still chatter every morning in the pears outside her downtown apartment windows.

1998: To Springfield with Walt on the new bike path north: First juncos seen, red-bellied woodpecker, flocks of robins. Wild cherries fallen to the path. Golden bittersweet berries showing high in a leafless tree; their vine had escaped the path builders. The blue sky full of sweeping cirrus, mild southwest wind strong in our faces, as we came back to Yellow Springs.

2003: When I walked Bella down High Street this morning, I found that bittersweet had fallen to the sidewalk. When I looked at the vine tangled above me in the maple tree, all the red berries were showing inside their wide-open hulls. In Washington Court House, quite a few dandelions were blooming. This afternoon as I went out to the woodshed, an Asian ladybug flew in front of me heading for the honeysuckles.

2005: Hard frost yesterday and this morning. Bittersweet hulls on the sidewalk, white exteriors of euonymus berries splitting, revealing the orange cores. Lettuce, rhubarb and comfrey prostrate in the cold. Hydrangea and mock orange leaves curled and blackened. Ice on half the pond. Beech tree on Dayton Street and Jerry and Lees sweet gum are both about three-fourths gone. Dahlia bulbs dug today.

2006: In the park where I walk, the paths have stayed green in spite of the cold, contrasting with dull fields beside them. Osage fruits are almost all down, stand out chartreuse, surreal, at random along my river walk. I brush against a patch of black-eyed Susans with brittle foliage, petals gone, centers so black.

Yesterday, I saw the first juncos of the winter, their white breasts ready for snow. Golden bittersweet berries were showing, pushing out from their pale hulls, high in a leafless tree. Hydrangea and mock orange leaves were curled and blackened from frost. On my black walnut tree, only three of the walnuts remained, hanging alone, waiting for a storm. The blue sky was full of sweeping cirrus, southwest wind strong in my face.

Cleaning one of our closets, Jeanie found a family of camel crickets, two large and four small ones, living in an empty shoebox. When she picked up the box, the largest one jumped onto her sweater as though it were defending the family. Camel crickets, of course, bring good luck in winter, and she tucked them all safely in the greenhouse.

2007: Walking through the alley with Bella this morning about 9:15, I came across a small flock of starlings in the honeysuckle bushes, and several of the tall trees held larger groups of birds than usual. All but three of the Limestone Street black walnuts have fallen. All the leaves have come down from the trumpet vine, following the season of honeysuckle leafdrop.

Thirty years ago, most turkey vultures left the Glen by the first week of November. Some years since then, especially in the 21st century, the vultures have been seen throughout the winter. Local naturalist Ruby Nicholson sent me this observation on the buzzards of 2007: “At 4:15 p.m., November 18, I was on President Street near Cory Street. Nearby was a tree covered with buzzards. I began counting on the east side of the tree and ending on the west: 68 and the critters were still coming in when I left. One hour later, only three remained. I feel sure they gathered at this place to take off on migration.”

2008: Along the road to Wilmington, the woodlots are bare and brown. Light snow dulls the new winter wheat. When I arrived home at 4:30 this afternoon, I surprised a female ruby-crowned kinglet, a stubby, finch-like bird with a white eye ring, in the rose of Sharon bush in the front garden. She flicked her wings and peered at me, hopped over to the forsythia hedge. She was clearly on her way south to the Gulf from breeding grounds in Canada.

2009: Another soft morning in the 50s, misty rain off and on. One patch of gentle blue, surrounded by hazy clouds above me. The alley wet and bare, starlings whistling off to the east along Stafford Street, two starlings seen in Don’s maple tree on Dayton Street. More and more honeysuckle leaves coming down leaving the hedge line empty. Limestone Street privets gradually turning violet gold. When I checked the white mulberry tree this afternoon, I saw almost all the remaining leaves had come down in the rain.

2011: The coldest morning so far, low in the mid 20s. The rest of the white mulberry foliage came down over night. The Osage leaves fluttering down, but many still hanging on.

2013: Returning from my walk with Bella this morning, I came upon a male cardinal attacking the reflecting windows on the camper I have parked on the street. So he is starting to defend his territory.

2014: The backyard snow is littered with the last Osage, redbud and river birch foliage after a vast Arctic intrusion, freezing temperatures all the way to the Gulf of Mexico.

2015: The Dayton Street beech and the Xenia Avenue sweet gums are three-fourths down, many ginkgoes in town still at half, Lil’s burning bush still bright red. The newer Norway maples across the street keep maybe a third of their color. Buzzards circling the south end of town. Bob Barcus left a rambling poem-message about the roses still blooming in front of the bank downtown. Jill watched a large flock of starlings in the trees out side her window this afternoon. Heavy wind and rain this evening, a wet close to a mild and breezy day.

2016: Warm and sunny throughout the day, the high reaching 75 to tie the 1930 record. The koi were more active in the summer-like weather. Along the east border of the yard, bittersweet berries were opening to show their brighter seeds. The pussy willow buds above them were tight and ready for winter. Barometer dropping, prelude to real November wither. Downtown, the Zelcovas hold, and the post office pear tree is burnished gold and red, and shedding.

2017: Yesterday a walk before sunset along the bike path, the barometer falling, the sky just clear enough to provide glow to the olive green honeysuckle leaves and the burnished path sides and the second-spring water cress in the ditches. Winterberry vines hung along the path, red berries protruding from white shells. Sometimes we found bittersweet with its orange fruit holding all uncovered. We saw one coralberry bush with a few last, red-violet coralberries. A spinning cluster of craneflies followed us for a while across the old soybean field.

This morning a great murmuration of starlings came up from the southeast and circled and settled a few moments in the high Osage trees behind the house, then moved northwest. A squirrel chattered in the honeysuckles, and the wind grew harder. A robin whinnied twice near Dayton Street. The sparrows were skittish, fed sporadically in the early afternoon, then stayed away a long while, and then for a few minutes they swooped in to feed, then flew off in a whir, a flurry of beating wings, came back and forth twice and then were gone to hide from the restless weather like butterflies do in summer.

The wind came in crests and troughs, the sky pulling deep breaths in then pushing them out against the high trees, the sound of ocean waves landing ashore, the last leaves whirling away in handfuls and alone like moths. I rested in the silent pauses of the wave trains, became excited when the maples and locust trees rocked in the deepening swells, and the bamboo near my greenhouse bowed and rebounded over and over.

For hours the gray sky gave no hint of the change ahead. Then slowly the clouds became lower and darker, the afternoon turning to twilight. A formation of maybe two dozen Canadian geese suddenly appeared above me flying north. Then lightning and then thunder, then rain.

2020: All the white mulberry leaves are finally down. The Osage holds, as do some of the honeysuckle bushes on the north side of the yard..

In quantum mechanics, “position” is like a strobe snapshot. Momentum is the life-created summation of many frames.