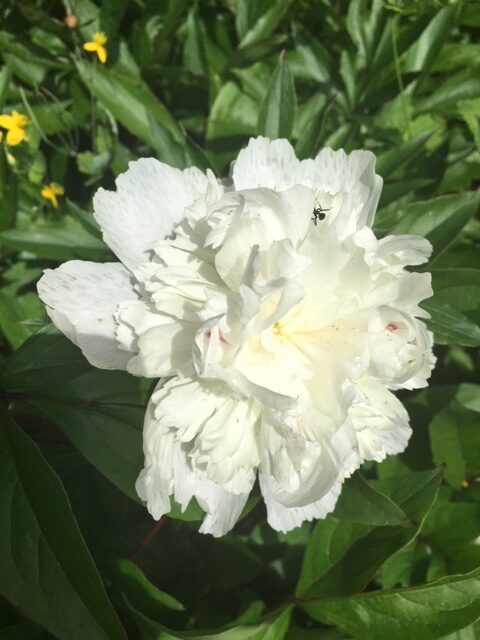 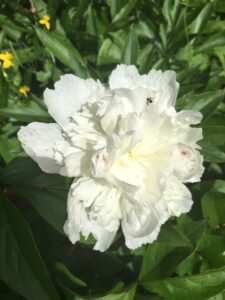 Haying begins above the Ohio River, then tobacco planting, then cantaloupe and pumpkin seeding, then commercial sunflower seeding. Then come thistle blossoms and the first ripe strawberries and the hatching of the last goslings and ducklings, the heading of winter wheat and the end of soybean planting in dryer years, the spawning of bass in farm ponds, and the completion of the canopy overhead.

1984: Mulberries about half size. Ash tree outside my window is flowering.

1986: At Cowan Lake, poison ivy has its first flowers, common cinquefoil well along, and blue-eyed grass (Thoreau found it on the 30th, near Concord, 1856). At Antioch School, red spirea has opened.

1991: First two fireflies seen high in the back locust trees. Baby robin in the yard, maybe a week or two old. White waterleaf in the pussy willow garden finally blooms.

1993: Half grown groundhog seen on Grinnell. A dozen deep purple Siberian iris in bloom. End of the lily-of-the-valley and the bridal wreath spirea, snowball viburnum rusting. The wood hyacinths disappeared a week or so ago. Mulberries are about half size, green. Outside my window, the ash tree has golden flower clusters in late bloom. Along the east hedge, wild grapes are in full bloom, delicate inflorescence almost swallowed up by the forsythia. Rhododendron seen completely open along Union Street. Bittersweet nightshade full bloom near North Glen. Pale pink peonies early full in the yard, honeysuckle half done.

1994: The first bright orange geum and the first peony and the first Siberian iris all opened today. Lupines are still full bloom.

1995: First small bowl of strawberries picked from the garden this morning. First pale pink peonies opened in the yard. Blue flags are coming into full bloom, white and violet iris continuing to blossom. Privet buds showing white along High Street. Last of the apple blossoms fell from the late trees this week.

1997: At Irmgard’s, there is a bank of bright purple rockets maybe 100 yards long and 50 feet deep. By the side of her driveway, the first roses have come out.

1998: Cedar waxwings spend another day in our locusts and mulberries. Now all the chard has been transplanted, and can be picked for salads. The Bibb lettuce is perfect. Foxglove, sweet Williams, at their peak.  In the pond, Jacques, the green frog, started calling again after maybe six weeks of silence. And the tadpoles are getting fewer and fewer, more and more hidden. Is Jacques hunting them?

2000: Into North Glen with Mike this morning: Saw the first gold-collared black fly, found fire pink and colombo (tall spike of greenish, four-petaled flowers, each petal containing a round wart-like bump), white violets, clustered snakeroot, a few last white and blue waterleaf. Late Spring flowers were gone, the canopy complete, and May apple foliage was rusting here and there. In the yard, late iris, poppies and peonies are gone now, along with the mock orange and the horseradish. But the air is still heavy with full blooming privet and Japanese honeysuckle.

2003: First Japanese honeysuckle blooms as the last of the rhododendrons unravel. Privet still not open all the way. Two red admirals seen in the garden today.

2007: White yarrow opening at Moya’s. Mateo’s dense yellow sedum was in bloom this morning. White-flowered penstemon opening. First lamb’s ear flowering. Cedar waxwings still feeding in the mulberry tree. Sparrows, starlings, grackles, cardinals, one blue jay and a nuthatch at the feeder throughout the day. The sweet rockets, sweet Williams, midnight salvia, spiderwort, dead nettle, and the last of the blue flag iris create the first major line of color along the north garden. In the afternoon, young grackles and a parent on the lawn, the babies demanding to be fed. Iris declining in town, peonies still completely full bloom in the countryside on the way to Enon. Hemlock tall and flowering in the swales and pastures. One hardy water lily and three water hyacinths placed in the pond this evening. Pond iris are still in full bloom.

2008: Mock orange and locust blossoms still strong and fragrant. Most of the honeysuckle flowers have turned from white to a gold, and one bush is shedding. Almost all the Dutch iris are open now, and about half a dozen peonies. Pond iris budded, showing color, one opening at dusk. Bridal wreath on High Street has deteriorated. Ash seeds are well formed, about an inch long. Five tiger swallowtails visited the garden today. Huge young grackles in the lawn being fed by their parents. Jeanie cut back half the violet wood hyacinths.

2009: This morning, I watched grackle babies being fed by their parents. Mulberries were well formed at Mateo’s tree. First buds noticed on the winterberry vines. The first white achillea opened. Yesterday’s ten water iris is down to seven.

2011: Oranges ripe on their branches over the streets of Rome, Italy. Some large-flowered magnolias seen in bloom.

2012: Tree of heaven in flower, wild grapes some the size of BBs, others pea size, salvia, late allium and the chives in decline, stella d’oro lilies in early full, along with the Asiatic orange lilies. Wild garlic/onion budded.

2013: Moya reported that a whole ootheca worth of praying mantises emerged after she brought the casing into her house. She had left home for a bike ride, and while she was gone, the insects came out of their nest. “They were all over my ceiling,” declared Moya, “and everywhere in my house. It took me two hours to get them outside!”

2015: Soft showers continuing of locust petals, honeysuckle flowers, cottonwood cotton. First Knockout rose, (thirty years ago, Jeanie’s roses were in full bloom in the last week of May.) first gold-collard blackfly, buds on the Japanese pond iris. Throughout the day, “scrawing” by the grackles: the fledglings are out!

2016: The first long-bodied orb weaver spider spun its web across the west end of the pond last night. Constant robin peeping through the afternoon, fledgling guiding. Wild grapes and bittersweet both at the same point of late bloom. The trellis wisteria is losing its violet petals, dusky foliage filling all its vines. This evening, Rick wrote: “Fireflies tonight! Summer’s here.” And: “Walking home today at 10 p.m., I saw the unmistakable blinking of two or three lightning bug larvae! I don’t remember them being out so early, but it’s nice and humid and warm!”

2017: Along the bike path: wingstem and touch-me-nots knee to waist high, poison hemlock late full bloom, a small bud on one of the Japanese pond iris (which I had saved from the koi, transplanted by the peonies). Buds on the black raspberry bush on Limestone Street near High.

2018: To Oxford, Ohio, down toward the Ohio River: From the window of the car: catalpas, daisies, fields of yellow sweet clover, tall full hemlock, cattail foliage waist high, the canopy of leaves appearing mostly complete. In town near the university, acorns about the size of a pea, linden bud clusters, black walnut seed catkins on the sidewalks, full catmint and purple perennial salvia, roses, pink spirea, a great blue hosta and the first privet in flower, birch catkins turned to fruit, a few wild onions headed, one red maple with half-inch seed wings. Coming home, I just missed running over a turtle that was crossing the highway near the Great Miami River.

2019: This morning, I sat on the back porch and talked with Neysa, watched the erratic flight of a golden fold-wing skipper. On a drive to Dayton, I saw full blooming wild daisies and yellow sweet clover on the roadsides. Tonight, still no fireflies, but steady chanting of the tree frogs.

I delight in the everyday Way,

Myself among mist and vine, rock and cave,