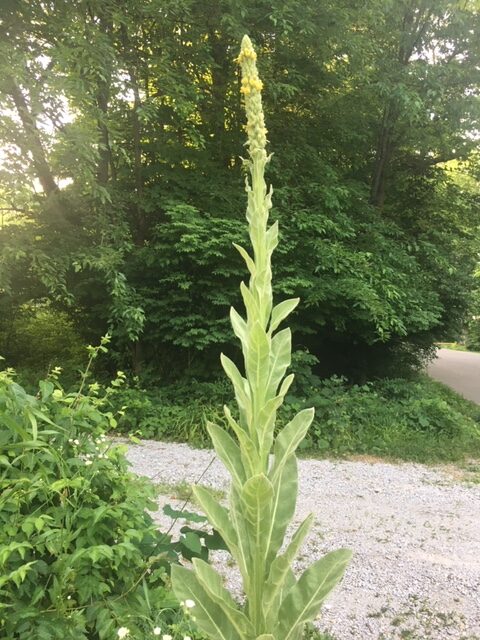 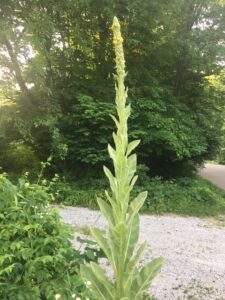 And Debauchee of Dew —

From inns of Molten Blue —

Fifteen percent chance of a high in the 90s today, 55 percent of 80s, thirty percent of 70s. Most of the nights are in the 60s, but 40s are recorded ten to 15 percent of the time, and 50s fifteen to 20 percent. The sun almost always shines, and rain almost never falls on June 24th; it is one of the three driest days of the Yellow Springs year.

Leafhoppers and Japanese beetles reach the economic threshold on the farm. Katydids are silent but roving through the undergrowth. The first woolly bear caterpillars, harbingers of winter, cross the road. Snapping turtles and mud turtles hatch.

1983: First small bowl of both black and red raspberries.

1998: Saw a young toad, maybe an inch long, hopping through the grass this afternoon. Aida talked about seeing one of her toads, raised from a tadpole, on this date; and Lynn told the same story about finding a toad on her land on the 24th. Gooseneck, the very first, blooms in the north garden now.

1999: Purple coneflowers open in the yard.

2001: Returning to Yellow Springs from Madison, Wisconsin: The transition from Wisconsin Early Summer to Lower Midwest Deep Summer was clear by the time we reached central Illinois. Hemlock, parsnips and Canadian thistles all deteriorated quickly the further south we drove. Some fields and roadsides, however, showed a patchwork of mixed seasons, some areas holding on to June, others letting go completely.

2005: To Miami Beach: Mimosa trees and elderberry bushes in bloom from Ohio to Florida.

2008: Another young dove in the lawn this morning. One grackle visited the feeders. At least 18 different lily plants in bloom. No Japanese beetles yet. On the road to Fairborn, Canadian thistles and hemlock half to seed, wheat deep golden.

2009: Lizard’s tail has reached full bloom in the pond. Mulberries continue to fall on Limestone and Davis Streets.

2010: End of yuccas along Davis Street. The midseason hostas have begun to flower, and Jeanie said she heard three separate, loud cicada calls this morning.

2012: First robins heard at about 4:15 this morning, a cardinal at 4:40, birdsong steady and loud through the early part of the day, blue jays joining in, too. The lily in the dooryard is lush with six huge blossoms, and a number of daylily plants (29 varieties today) are putting out dozens of flowers, bringing the peak of lily bloom now. This evening when I walked Bella an hour before sunset, I heard no birds singing.

2013: At 5:20 this morning, steady sparrow chirping, crows in the distance, cardinals, titmice and doves calling, wren heard chattering, and maybe a thrush, even a rooster crowing. Cricket trilling steady and strong.

The lilies have been swallowed up by weeds and encroaching foliage this year. They are late, compared to last year, but there are also fewer of them. The zinnias are starting to fill in a lot of spaces, though, and they should tie the surviving perennials together for the rest of the summer. At Peggy’s garden, lamb’s ear and Russian sage in full flower. Osage fruit fallen to the sidewalk, a little smaller than golf-ball size.

2014: Monarda and purple coneflowers coming in along North High Street. Yesterday, I again found Osage fruits on the sidewalk; some were bigger, some smaller than golf-ball size, similar to what I have found in the same place in the second week of June. Eleven lily plants in bloom here, lilies and roses becoming very prominent in the alley garden that I watch in my walks.

2015: Once again, 22 lily plants in bloom. This morning, I came across Osage fruits , the same sizes as last year, on the same High Street sidewalk. I found the first two Japanese beetles of the summer on castor bean leaves. Two great spangled fritillaries visited the tithonias, the first time I’ve seen two of them together.

2016: Thirty-two lily plants in bloom this morning, twelve of them now standard lilies (including three blossoms on the dooryard lilies). The Stella d’oros are down to just four plants. The bright primroses have almost disappeared. Monarda and Heliopsis full bloom. Mulberries still falling to the street, Osage fruits, too, as in so many previous years. One zinnia completely open. Motherwort foliage is tattered and diseased in the northwest corner of the garden.

At John Bryan Park, thimble plants were open, their single stalk providing the only light in the undergrowth; even most of the hobblebushes are just starting (but fully developed at home).

Seeing only what is fair,

Sipping only what is sweet.