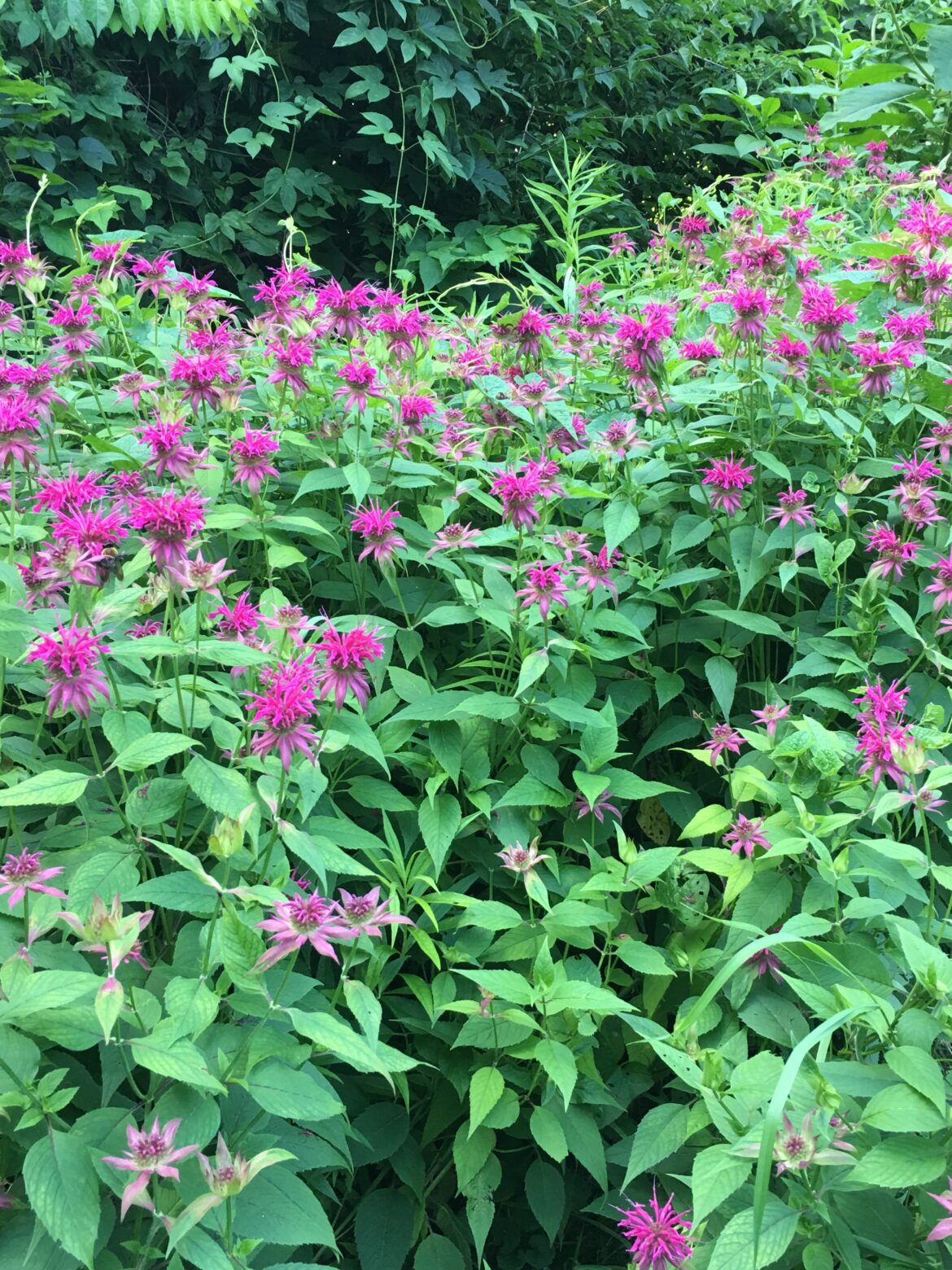 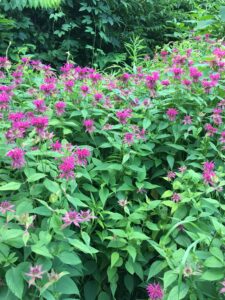 I hear the wild bee wind his horn,

The bird swings on the ripened wheat.

The long green lances of the corn

Are tilting in the winds of morn,

The locust shrills his song of heat.

Temperature distribution for today: 20 percent chance of 90s (including a slight  chance of 100), seventy percent of 80s, ten percent of 70s. Skies are partly cloudy to sunny 80 percent of the days; precipitation, however, occurs 40 percent of the time as the final high-pressure system of the month approaches and the Corn Tassel Rains get underway. Those rains typically take place in a two-week period between the end of June and the middle of July.

1985: Creeping bellflower identified, has probably been open for almost a week.

1990: This has been the greenest June that I remember. And the cardinals have been singing just as loud as in May all month, the decline of spring not so obvious, the roadsides lush.

1992: Astilbe complete for the year. More raccoons killed along Grinnell, foretaste of the Dog Days.

1993: The Corn Tassel Rains are two weeks before the corn tassels this year. The rain batters the perennials. The coreopsis are drooping, lilies and cosmos leaning, hollyhocks broken and fallen forward into the vegetable garden, weeds starting to get the better of us now. Lettuce has gone to seed, and the radishes are hot.

1997: First coreopsis blooms today, planted from seed in March. Riding along the bike path, I found the first dogbane in bloom, first pokeweed. July and August’s plants getting tall: leafcup, wild lettuce, ironweed. On the way down Limestone Street, I passed a mulberry tree: black mulberries still all over the road.

2000: Portland, Oregon through eastern Washington, June 27 –  29: Cow parsnips, which had been in full bloom a week ago when we arrived in Portland, now mostly gone to seed. Blackberries have set fruit, bushes darkening, many thimbleweed flowers gone, fruit formed. Cattails have emerged and show their pollen. Rhododendrons, late a week ago, are gone. Blue-tint snowball viburnums large, full flowered in Portland, the smaller variety just opening at Quinault Lake in southwestern Washington. Full-blooming sweet peas along the river gorge, and common throughout the trip.

2002: We left dry Wyoming and came into the green Salt Lake valley. The corn is Yellow Springs height, haying all across the land, and some of the wheat is gold. In Ontario, Oregon (southeastern Oregon): milkweed, pink spirea, hollyhocks, potentilla all full bloom. Salsify, yellow sweet clover, and teasel seen here and there along the roadsides, a little behind southwestern Ohio.

2003: Several lilies done for the year, the pale pink and the tall orange Asiatics. The rest of the lily bed is opening nicely, complemented by pink and cream hollyhocks and violet mallow. The large blue hosta remains at full bloom along the west border. Green thorax noticed on a small thin bee that was visiting the mallow. Small beeflies noticed around the yard the last few days. In the Caribbean, Hurricane “Bill,” the second hurricane of the season, is moving north toward Louisiana.

2004: One last Japanese honeysuckle flower dies back, the peak of bloom having passed maybe two weeks ago. The red June phlox that started in early June continues to flower, even as midsummer phlox is starting and the first blackberries are reddening at a few locations around town. The second budding of comfrey is beginning. The final flowers on the pink spirea are rusting, and the spiderwort seems to be declining.

2007: Driving north of Springfield, I saw the roadsides full of the pale green decay of hemlock and the blackening seed clusters of angelica. Coming back from Xenia, I saw a few corn stalks with tassels. Late this afternoon, crows were whining and calling in the back trees – adults and fledglings arguing about something.

2008: A young robin with a speckled breast came to the porch this morning, the first adolescent that I’ve seen this year. The red-bellied woodpecker called about 9:30. Throughout the morning, clouds, thunder, scattered rain, the weather perfect for transplanting, but wet for walking in the woods. No whining crows so far. Three purple coneflowers open in the yard. One red monarda patch almost full. Midseason hostas are fully budded now, but none have blossomed yet.

2009: At Gethsemani, the chestnut tree’s flowers are falling now, browning, soft, unlike their spiny, heavy fruit. Throughout northern Kentucky, the wheat has been cut, and corn is six to eight feet tall. Canadian thistles have all gone to down, and the hemlock is yellowing and bent.

2010: Hard rain and lightning storm last night. This morning, cardinals early, and when I got up about 5:00, doves were calling, and then crows came in. And maybe the crows are starting to flock now, becoming audible as they gather.

2011: Queen Anne’s lace and chicory are common, and daylilies increase in variety and number. Now the northwest garden is in full bloom with roses, salvia, heliopsis, gooseneck, spiderwort, monarda, the Annabelle hydrangea, the ditch lilies and new daylilies. A pint of raspberries picked from our few bushes, the best crop of the year! Cardinal vespers this evening around eight o’clock. Field crickets at various points in my walk with Bella. Robin peeping outside our bedroom window just after sunset.

2012: Deep summer now, a high expected past 100 today. A brown butterfly seen by the pond late this morning. The Joe Pye weed has been heading up for about a week. Sweet rocket seed stems cut back this morning. Mid-season hostas in full bloom throughout the neighborhood. Ramps in full flower beneath them. First corn tassels seen on the way back from Beavercreek.

2013: One great spangled fritillary butterfly in the zinnias about noon. John Blakelock has ripening blueberries and a katydid calling. Tree crickets sing through the night and day.

2016: Thirty-eight lilies this morning. Small bee with bright green thorax (Agapostemon) noticed on the monarda. Near the shop downtown, I saw the first rose of Sharon open. At the quarry habitat, a predominance of white sweet clover with scattered blueweed and blue vervain, St. John’s wort and orange butterfly weed. A few very old daisies are still in bloom. A very simple environment within which to watch the trajectory of the year. Coming back to Yellow Springs, Jill and I noticed the first small flock of starlings, a mini-murmuration above the road and adjacent cornfield.

2018: Forty-three day lilies, thirty-six ditch lilies, Asiatics down to three blossoms, the first dahlia opening, the first zinnia slowly unraveling. Many sulphurs in the yard today for the first time, a monarch stayed in the milkweed throughout the morning and a great spangled fritillary and a red admiral came by the hummingbird feeder. Tree frogs strong along Dayton Street as Jill and I walked after sunset.

2019: At 4:30 this morning, robins and cardinals raucous, doves soft in the background. Sixty-eight ditch lilies, one tree lily, three day lilies, one Turk’s cap, three Stella d’oros. I noticed that trumpet creeper flowers have appeared on the porch trellis, probably have been out maybe a week. Sparrows chant through the day, abundant at the feeder, fledglings a part of the action, the birds exploding as a flock when startled. Chiggers attacked me as I transplanted canna lilies. One hackberry butterfly came by as I worked. A record-breaking heat wave, temperatures in the 100s, has spread across Europe, and is growing here, as well. Tree frogs calling quietly as I walked Ranger at night.

Once you realize this floating life is the perfect mirage of change,

it is breath-taking, this wild joy and wandering boundless and free.