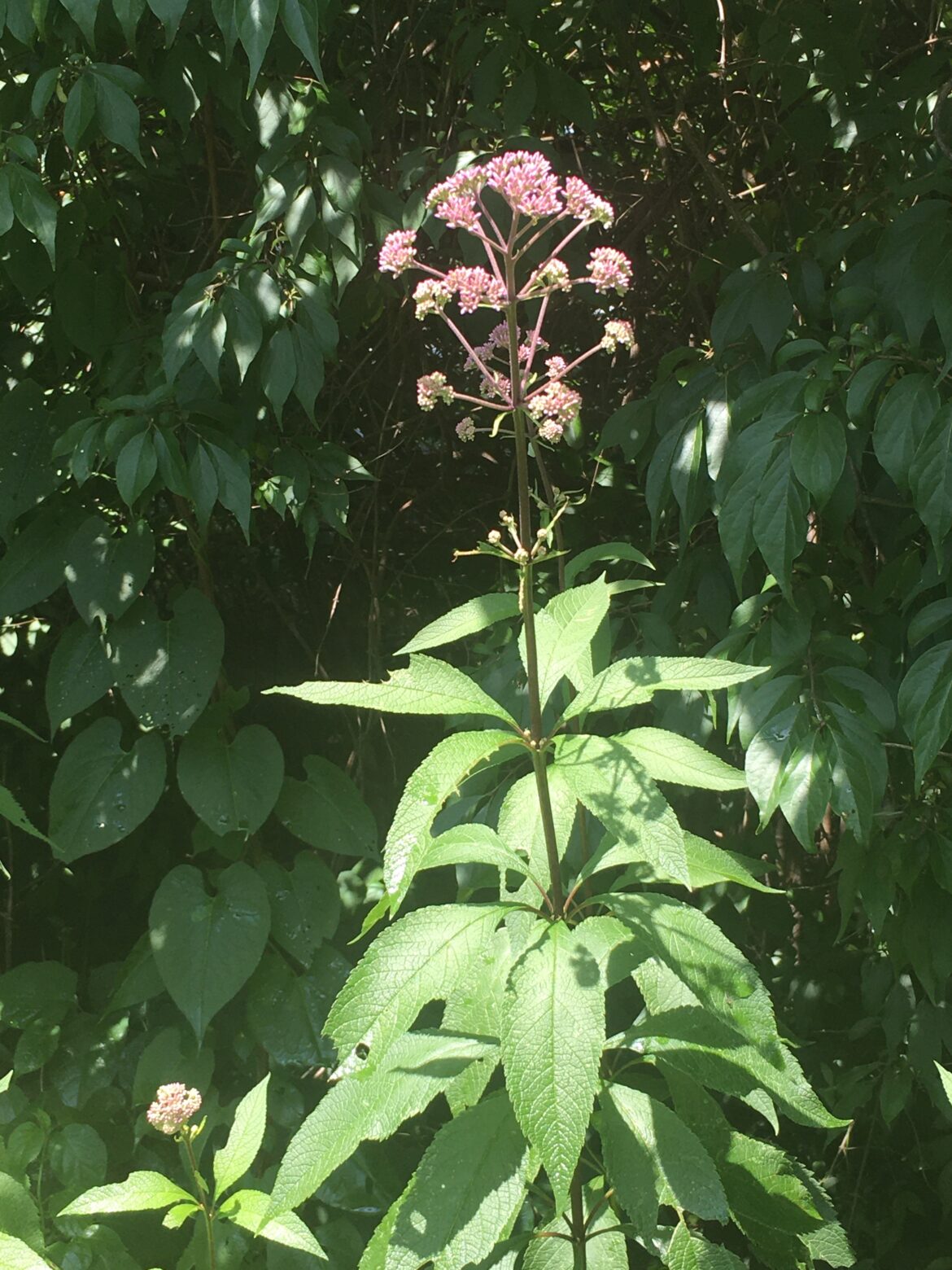 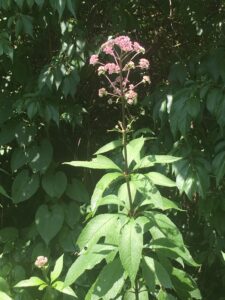 How suggestive this thistle down…which, as I sit by the open window, comes in and softly brushes my hand! The first snowflake tells of winter not more plainly than this driving down heralds the approach of fall.

High temperatures are above 90 four days in ten, between 80 and 89 five days in ten, in the 70s one in ten. Even though the record low is 49 in Dayton, Ohio,, morning lows rarely reach below 60 on this date. Chances of rain are 40 percent, for completely overcast skies 30 percent.

Late Summer’s burdock blooms. Tall blue bellflowers, pale violet bouncing bets and pink germander color the waysides. Water hemlock and arrowhead blossom in the swamps. Round galls swell on the goldenrod. Fruits of the Osage orange are two-thirds grown, heavy enough to drop in a storm. Black walnut fall has begun. The number of lilies in bloom drops rapidly now. The Deep Summer hostas have completed their flowering, bee balm has lost its color and the spirderwort is gone.

1982: At South Glen, blackberries are ripening, should be ready in less than a week. First burdock and horseweed are flowering. Milkweed pods are forming. Wingstem, field thistle, and ironweed early bloom.

1987: Hummingbird moths still coming to the impatiens, milkweed beetles still mating, even with the milkweed pods a full inch long and the flowers drying up. Some Virginia creeper is red.

1990: The first garden pumpkin, discovered under the Japanese knotweed, is a foot in diameter now. My garlic harvest complete today, the cloves a little loose; I should have dug them a week ago. Purple coneflowers are at their best in the east garden. Red admiral butterflies are gone.

1991: One resurrection lily blooming on Dayton Street. Katydids calling at 8:15 p.m. For a while, cicadas, crickets, and katydids all sing at once.

1993: Louis the cat captured a young blue jay. This afternoon, I saw the first woolly bear caterpillar by the forsythia, full rust orange color. Last of the cherries eaten by the birds.

1997: August’s tall sedum is budding, first blooms seen on some in Xenia.

2002: Cardinals at 4:20 a.m., but no robin chorus. A few robins peeping by 4:45. Blue jay at 4:55. Dove at 4:57. Crow at 4:59. Most lilies gone. I counted fewer than a dozen blossoms along the north garden this morning. Phlox and rudbeckia speciosa are in early full flower now. Heliopsis, Shasta daisies, Queen Anne’s lace, gooseneck, and the butterfly bush are steady bloomers. Purple loosestrife is still in full bloom in the pond and in the drainage ditch near the Clark County fairgrounds. Last of the monarda.

2004: Blue jays restless in the back woods, crying back and forth.

2006: One black swallowtail, one monarch or viceroy. Several buckeye butterflies. Thirty lily plants in bloom around the yard, down maybe three from two weeks ago, but many of those plants are thinning quickly. The white phlox are just starting in the yard, full bloom in town. Red monarda ending quickly. The black-eyed Susans planted from seed this spring are in full bloom now with the other yellow rudbeckia. Mallow holds. Fields of Queen Anne’s lace everywhere. Crab apples are red now, bitter but not completely inedible.

2007: Beeflies, mating on the wing, zooming across the back patio.

2008: Cardinals but few robins at 4:50 a.m. A large hawk sat on the bird feeder about 7:15. His breast was pale and unmarked, wings dark. When he flew toward me over the house, I noticed his tail broad with a stripe. In the alley, one tall coneflower fully open, another starting. Don’s cherry tree is still heavy with cherries. Throughout our garden, 42 different lily plants are in bloom. The first white phlox seen in town, our white phlox just breaking its first buds. No resurrection lilies seen yet where they came up in the spring. A number of white mulberry leaves have turned bright yellow now as the tree’s berries slowly disappear.

2009: A cardinal at 4:55 a.m., a crow passing through at 5:01. Starling fledglings pestering their parents for suet in the back yard this afternoon. Cricket hunters seen: cricket time is coming. Spider web across the path into the compost area today – the first time I’ve run into one back there.

2010: Joe Pye weed early full now throughout High and Stafford Streets. In the north garden, the lilies are almost all gone; the August darkness and the bindweed are covering their leaves and pods, the effects of my neglect of all the flowers this summer now surging across the yard. Along the front sidewalk, jumpseed is blooming. This evening, cardinal vespers between 7:30 and 8:00, then robin vespers, all through the intense cicada song. Then at 8:20, one katydid, then three minutes later, the full katydid chanting. As I stood outside in the dusk to hear the first katydids, small moths came to the butterfly bush to find nectar.

2011: One spicebush butterfly this afternoon. Only sixteen lilies in bloom today, down a dozen from just a few days ago. A quiet walk this evening, no cardinals or robins heard.

2012: At 4:45 a.m., full cardinal and robin song, crows joining in. No end of the morning chorus – perhaps it started up again just at the pivot time when it usually declines. Seven lily plants in bloom. Last small blueberries eaten from the yard. Sparrow fledglings begging, and the sparrow flock this afternoon was winter size, several dozen birds at least and constantly cheeping, feeding on the ground, intermittently fleeing to the honeysuckles with a great “whoosh” and then returning almost immediately one by one. Three hummingbird moths at the butterfly bush, two tiger swallowtails today.

2013: Twenty lilies in bloom this morning. One tiger swallowtail in the zinnias at 8:30. A few of my gladiola plants have budded, and some in front of Gerard’s house and near Lawson Place are in full bloom. I found a large American toad sitting on the front steps when I went out late this afternoon. After a long period of heat and humidity, my sister Tat in Madison, Wisconsin writes: “Yesterday – a fall evening, and here it is, an autumn afternoon to follow.  The skies are gray, a cool wind is blowing a few leaves around, a little rain is falling.”

2014: Twenty-seven lilies in bloom today, the numbers of plants holding, even as the blossoms become fewer and fewer. A polydamus swallowtail seen at 11:00, and a white (powder blue, actually) tail dragon fly. Looking at last year’s note about the American toad sitting on the front steps, I remembered that I saw one in about the same place less than a week ago. Along the upper ridge at John Bryan Park, the most common wildflower was small-flowered agrimony, mostly to seed.

2015: Twenty-six lily plants in bloom today, the circle garden continuing to hold strong but the north gardens almost gone. The stargazer lilies didn’t bloom this year; I transplanted all of them in the fall and spring, but the transplant obviously was not successful.                       Now a new phase for me: the Early Summer garden comes to an end, time to clean up where the June and July perennials have gone to seed, thinning the weeds that grew up around them (held in check by their vigor, but now being overrun as the weeds grow stronger).

I cut back hosta and lily flower stalks, cleared some bindweed and clearweed, propped up the tangled primroses, transplanted the overgrown decorative grasses, put string around the new zinnia flower patch. It is time to be cutting the zinnias now in order to keep them coming in and to keep them compensating for the lack of perennials. This is also the time of coneflowers and Shasta daisies throughout the village, but I have only one small patch of Shastas, and the heliopsis are falling over and need trimming. Butterflies continue scarce: One silver-spotted skipper, one male tiger swallowtail. Blackberries reddening along the bike path near Ellis Pond.

2016: A large camel cricket saved from Bella’s water dish before breakfast. Only thirteen lily plants, and those with just a flower or two. In the North Glen this morning, touch-me-not, wood nettle and leafcup were tall and blooming, a green frog was barking, and a pileated woodpecker was beating on the drum of a hollow tree. The river was very low, able to be crossed on stepping stones all along the walk. A heat wave has settled in over the entire country, and it is time to water the garden, which is about at the same stage it was last year (a time of zinnias, amaranth, Shasta daisies, heliopsis, Joe Pye weed, very late hosta blooms).

2017: Thirty-five lily blossoms today, about twenty plants, most with just one flower. Now the mid-season hostas are done blooming and the monarda has lost its color. The spiderwort still has a few blooms, but its foliage is rusty and decaying. The jumpseed in the north garden has opened. Heavy rain after sunrise, and the castor bean plants are leaning badly. At 3:45 this afternoon, a tattered female black swallowtail came to the circle garden to taste the last lilies just after a hummingbird had sampled the first large purple zinnia.

2018: Fog and cool. Walk to the Catholic graveyard with Jill at 6:30 this morning.. Bullfrogs in conversation at the Glass Farm wetlands. Occasional robin whinnies. Blue jays and crows calling throughout our walk, blue jays continuing through the day like in 2004 – their young apparently about. Along King Street, the warble of a catbird. Wrens, cardinals, finches, one field cricket through the steady buzzing of the tree and ground crickets. Sixty-eight lily blossoms this morning; two days ago, there were one hundred and thirty-six: the hinge of Deep Summer opening toward Late Summer. Tonight, the full insect chorus: tree frogs and tree crickets and field crickets and katydids, with numerous fireflies throughout the neighborhood. The hinge moves a little more, the door opens wider.

2019: One hundred fifty-four day lily blossoms, 21 ditch lilies. When I went out this morning about six o’clock, I found a large green katydid on the screen porch. At least one monarch and several male tiger swallowtails in the zinnias this afternoon. Sycamore bark is falling at different locations around town, two sycamore trees on Phillips Street have lost many brown, curled leaves. The hummingbird visited the new feeder throughout the day, her nest somewhere close by in the honeysuckles.

2020: An abrupt drop in the lily count: 105 day lily, 15 ditch lily blossoms. Jill’s thin-leafed coneflowers opened in the night. Joe Pye weed is blushing. Two small checkerspot butterflies playing in the grass. Numerous pieces of sycamore bark found at Ellis Pond. Only occasional robin conversations. And I wonder if they have started their Late Summer retreat. Hickory nuts are almost full size, about the size of a golf ball. This evening, no katydids in the back yard area, but when I went out to check in the front around 10:30, I could hear them clearly – for the first time this year. And then Neenah wrote: “This morning you mentioned cicadas and katydids, and then I thought – I haven’t heard a katydid yet this year. It has to be any day now – And then BOOM. Half an hour ago I heard my first one of the year. It’s my favorite summer sound.”

The field as a whole projects a composition, almost a tone poem of insect song, that reflects successively the advent of summer, its fulfillment, its passing. One can listen to the field, and the woods as well, and so mark the days of summer.