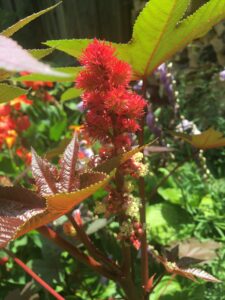 Inebriate of Air — am I

And Debauchee of Dew

From inns of Molten Blue.

Afternoons in the 90s are recorded 35 percent of the years on July 22nd, and 80s come 40 percent. Cool 70s occur on 25 percent of the years, the highest likelihood for moderation since July 11th. On the other hand, the hottest official temperature ever recorded in the Dayton area, 108 degrees, occurred on this day in 1901. Chances of rain are almost 50 percent, with completely overcast conditions occurring 35 percent of the days.

The coolest days of the week are typically the 22nd and 23rd of the month, when mild 70s are recorded about a fourth of all the years. The 23rd brings pleasant sleeping weather more often than any time in July: a full 35 percent of the nights drop below 60 degrees. The most consistent day of the period, and of the whole month, is the 24th, when highs in the 80s come 95 percent of the time. Sunshine remains the rule for this week of the month, with three out of four days bringing at least a partial break in the clouds. Chances of rain typically decline as July comes to a close, dropping from 40 to 45 percent on the 24th down to just 20 percent on the 30th and 31st. A cool front passes through the Lower Midwest between the 27th and the 29th. Five years in ten, at least one afternoon in the 70s follows that late-July cool wave. Evening lows in the 50s, unusual only two weeks ago, often return. Average high temperatures drop one degree on the 28th, their first decline since late January.

The last week of Deep Summer arrives to the song of cicadas, the katydids, and the new generations of crickets. Now, yellowing locust and buckeye leaves, and the brown garlic mustard give a sense of fall to the woods. A few Judas maples redden. Shiny spicebush, boxwood, greenbrier and poison ivy berries have formed.

1986: First ironweed seen blooming today. Small white caterpillar with black markings found in the garden. For the first time, the katydids and crickets were prominent together at 11:00 p.m. when I walked the dog.

1987: Wingstem and bull thistle sighted blooming from the road. First three-seeded mercury is open in the garden, the earliest I’ve found it. Burdock full bloom now. Velvetleaf has emerged well above the soybeans and has started to bloom. Nights loud with katydids, crickets; mornings and afternoons are filled with cicadas.

1989: First sweet rocket pods drop their seeds into the grass. Cardinal heard only a few times today. Doves seem to be getting much quieter each week. The blue jay that lived in the yard has left.

1993: Cherry foliage begins to yellow more quickly now that the fruit has been picked clean by the birds. Mulberries continue to ripen, attracting starlings to the back trees. Tall coneflowers, at least seven feet, starting to bloom at the corner of High and Limestone. Small flock of robins, maybe ten birds, seen on the morning walk with Buttercup. Have they started to come together already for migration?

2000: Blue jays still restless in the yard, whining, flying back and forth, caring for their young.

2004: Last day of the Stargazer and the Turk’s cap lilies. More yellow mulberry leaves are falling.

2005: Osage fruit – about half-size – and black walnuts came down in last night’s storm. The river is high and muddy after two or three inches of rain. In the garden, the number of daylily plants in bloom is 27, but the number of blossoms seems to be have passed its peak. In the south garden, the huge patch of red monarda is suddenly drab, almost all the bright petals fallen.

2006: One black swallowtail. Hummingbirds showing up in the middle of the afternoon. In our garden pond, the three-petaled flowers of the arrowhead opened overnight. The yellow coneflowers are a week or so ahead of schedule. The August Moon hosta are almost done blooming. The lilies are almost over now.                July webworms hang from the apple tree. The cabbage butterflies cluster at the purple loosestrife, up to a dozen at once, joined by bumblebees and a tagalong spotted skipper. The dragonflies weave back and forth, a giant black and white skimmer, three or flour big blue-tailed skimmers, a few needle thin bluets or short-talked damselflies too. The hummingbirds visit the rose of Sharon.

And the prophets of fall are here on time. I almost killed a dark woolly bear caterpillar on the way to Xenia three days ago. The fist Late Summer monarch butterfly came to the garden yesterday. The newborn daddy longlegs are growing up. The cricket hunters, long thin black wasps, started coming to the pond’s edge, scouting for their food that will sing this week.

2007: To Old Man’s Cave in southeastern Ohio: the landscape deep green throughout, no yellowing in the woods except in a few places along the road south of Columbus. One monarch seen crossing the highway, no goldenrod noticed, but a few wingstem seen in bloom. Chicory provided a strong blue border to almost all the roads; scattered trefoil brought in gold.

2008: Monarda in decline now, and Stargazer lilies going as quickly as they came. Burdock opens in the alley.

2009: One loud cardinal call at 4:17 a.m., then silence. Light rain and mild in the morning, then harder rain, cool in the 70s, throughout the day. The pond and the birdbath have filled, at least two inches of precipitation. Between the time I fed the birds around 7:00 a.m., and the time I went out to the garbage cans, something had killed a bird under the tall feeder. Feathers were scattered for about a square yard, down as well as feathers with white tips, maybe from a young jay. A cat or the neighborhood hawk? What I didn’t understand is that when I came out again around noon, all the feathers were gone, the ground completely clean. I talked to Maggie in Madison, Wisconsin this evening. She said she had seen dozens of small toads, maybe half an inch long, crossing the road when she took her afternoon walk.

2011: Deep heat wave continues, temps in the upper 90s throughout the East. In the north trellis garden, the red hibiscus opened overnight. One tiger swallowtail seen in the north garden. Joe Pye weed showing a little pink. Midseason hostas are almost done, as is the red monarda. Violet monarda is holding strong as phlox pick up color. Faint starling or grackle “scrawing” from fledglings when I walked the alley this morning about 9:00.

2012: At 4:45 a.m., strong cardinal and robin song, crows too. Robins continuing singsong calls well after sunup. Five lily plants in bloom, ten blossoms in all. The first two raspberries of the second crop picked. Large camel cricket found in the bathtub this morning.

2013: The prairie dock is budding at the corner of High and South West College streets. Male tiger swallowtails in the butterfly bushes much of the day, even two at once in the afternoon. Twenty-two lilies blooming. Fog in the hollows along Polecat Road this evening as Annie and I drove back from Ellis Pond.

2014: Twenty-one lilies in bloom today, several standbys gone. One polygonia seen in the north garden. About two-thirds of the zinnias are blooming, the drifts fully formed in four out the six plantings. Finch song from the honeysuckle as I counted the lilies. Jeanie’s stargazer along the north side of the house is superb. Cicadas loud for the first time on my morning walk with Bella about 8:30. The first hint of autumn blush on a maple at the edge of town. After a very warm and humid day with a high of 90 degrees, rain on the way, the first katydids on High Street sang at around 10:00 p.m. Fireflies still present on my walk.

2015: Running at 4:18 a.m., clear and cool in the middle 50s: Buzzing of crickets throughout the neighborhood. The first cardinal sang at 4:28, but steady cardinal chanting did not start until 4:35. No robin chorus at all, only scattered chirping around 4:55. Crows and doves were late, 5:12. Steady, rhythmic sparrow chirping by 5:30.

Twenty-five lily plants in bloom today. Cicadas prominent in spite of the cool wave that arrived yesterday evening…or perhaps because of it. By the front gate: the first jumpseed plant is blooming. Now that the plain mid-season hostas have finished flowering, the blossoms of the variegated hostas with dark green leaves and light edges are in prominent full bloom.

2016: Eleven lily plants today, most with just one blossom. In the pond, the first arrowhead blossoms have appeared, and a water lily bud has taken form – the very first of the summer. Hummingbirds visiting the tithonia, a hummingbird moth at Moya’s butterfly bushes. Peggy’s Limelight hydrangea in tall full flower. Tonight with Jill at an outdoor community theater performance of Shakespeare’s, Much Ado About Nothing, I drifted off (not being able to hear most of what the actors were saying) into the steady chant of katydids, the first time I had heard them this summer.

2017: Heavy rains as storm cells move down from Wisconsin. Only eleven lily blossoms today, most of them on just two of the small red-orange plants. A hummingbird moth seen on Moya’s lush purple butterfly bush this afternoon and a golden fold-winged skipper in the circle garden. Robin valediction heard on Union Street in the middle of the afternoon. Throughout the village, drifts of tall coneflowers and gray-headed coneflowers provide the dominant color.

2018: More rain and cool today, the third in a row. At about 7:00 this morning, the yard was quiet, the sparrows gone. A cardinal called a few times at 7:30. Hummingbirds back and forth to the feeder. On the front screen door, two plume moths, white, t-shaped and stick-like, were mating, oblivious to my camera inches from them.

In the yard, Joe Pye heads are violet with bloom above the purple coneflowers and Shasta daisies and golden heliopsis. Only thirty-eight lily blossoms this morning, precipitous fall in numbers, the bright, rich rows of flowers of early July almost empty, revealing the encroaching quickweed and bindweed that had been obscured by the power of the lilys’ color.

Even when the sparrows returned today, they were relatively quiet. The crows, however, still talked with their fledglings off and on, and a squirrel in the lanky, young box elder tree seemed to be imitating their scrawing as s/he squeaked and scrawed.

One male tiger swallowtail, one ragged admiral, one black swallowtail briefly seen, a sulphur, several cabbage whites. On the bike trail to Xenia, we found a white, hairy white tussock moth, set it in the grass. White snakeroot was budding, occasional leaves turning, bright yellow sundrops open. More field crickets than yesterday evening as I walked from Jill’s at 7:00 p.m.

2019: The heat wave broke last night with a brief storm. More cherry leaves are yellowing and falling in the back yard. A few of the serviceberry trees along Dayton Street are weathering, some shedding a little. A giant swallowtail in the zinnias this morning, and a monarch and tiger swallowtail this afternoon. A large flock of house sparrows fed at the feeder, exploding into the honeysuckles when I startled them. Katydids vigorous, shouting in my ears in the dark.

What more felicitie can fall to creature

Than to enjoy delight with libertie,

And to be Lord of all the workes of Nature,

To feed on flowres and weeds of glorious feature,

To take whatever thing doth please the eie?