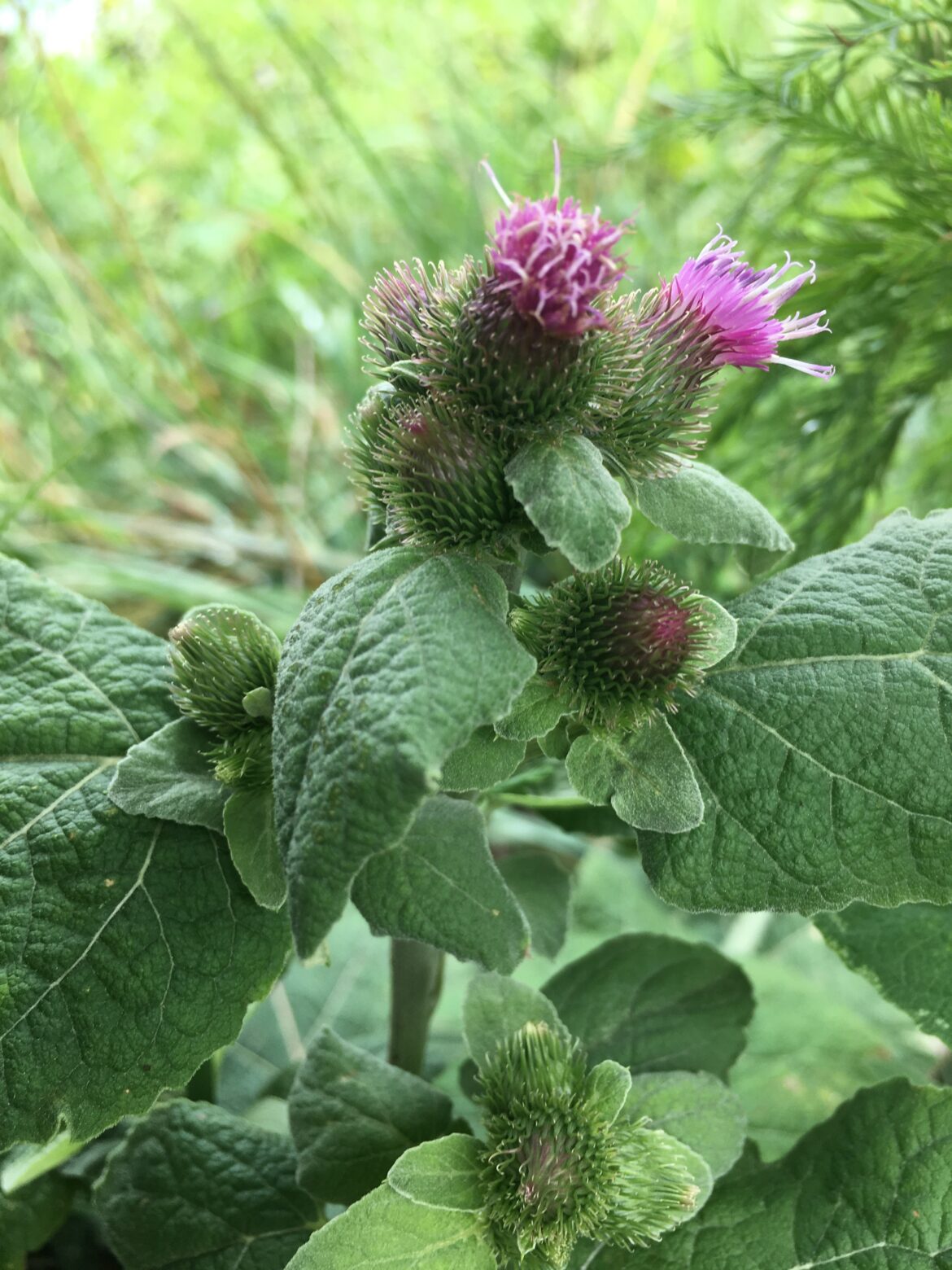 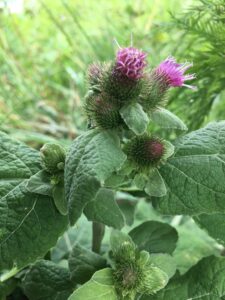 The observation of natural history is a simple and powerful form of meditation. In it I find that the chanting of the katydids and crickets and the frogs is no less efficacious than the songs of monks or the mantras of gurus or the deep quiet of the cloister.

Today has a temperature distribution identical to that of the 22nd, and the chances of rain continue at near 50 percent; sky conditions, however, are usually less cloudy: the sun shines at least 95 percent of the time. Thanks to the cool wave that often comes through this time of year, there is a 40 percent chance of a low in the 50s, making this the coolest morning in my weather history since the beginning of the Corn Tassel Rains. Although moderate nights do not stay for long, today could be considered one of the first meteorological signs of deterioration in the power of summer

1986: Cardinal still waking me up about five this morning.

1988: Crows loud this morning. Yellow mulberry leaves, hurt by the drought, fall in this evening’s thunderstorm. Cardinal only heard once today, at sunset after the rain.

1993: Crickets just beginning to sing in the evenings. Catmint old now at Elm and Dayton Streets. Hawthorn berries fully developed, green, with one berry with orange pollen in every few clusters.

1996: To Crookston in northern Minnesota: Starting with golden fog and cool temperatures this morning, sun rising orange in Yellow Springs. The white bindweeds are blooming now by the side of the road (having started on the garden fence a day ago). Queen Anne’s lace dominant throughout. Teasel half full, sundrops, trumpet creepers, gray-headed coneflowers, white sweet clover, a few elderberry flowers still, huge sow thistles, milkweed, some last hemlock, now goldenrod in bloom in Indiana, late fading crown vetch, huge cattails, great mullein near the top of its stalk, measuring out July, black-eyed Susans.

1997: Corn in the area is a third tasseled. Garden mallow is maybe two-thirds gone. Song sparrows identified in the yard this week. At the post office, a young woman asked: “Are you the guy that writes the almanac?” I said I was. “I can’t read it now,” she said, “I don’t want to know all that stuff about summer leaving.”

2003: Two tiger swallowtails in the north garden this morning.

2004: Cardinals steady in the early morning. At South Glen, the first ironweed has opened in the sun. Wingstem is starting to come in. A few blackberries are dark and sweet. Wild cherries are reddening, leaves yellowing on the silver olive, rusting on the buckeye. Several hickory nuts found on the path. Late Summer is here for sure.

2005: When I walk Bella in the evenings, grackles are always flocking in the trees along Limestone Street at sundown. It seems so common, so normal to have them there, but then I know they won’t be there soon, that their presence is an true but ephemeral marker of this phase of Deep Summer.

2006: A cold morning, sunny and 60, heavy dew. A cardinal sang at 4:46 this morning, then was quiet. Only robin clucking sounds near dawn. No doves until 8:15. Tall coneflowers are open in the alley – their first full day. Tree of heaven seeds are red throughout the region, have been turning all month.

2007: Robin song continues strong and loud in the morning. The very first tall coneflower is open in the alley.

2008: Cardinals but no robins this morning at 4:40. Joe Pye weed has developed color in the past few days, appears to be in very early bloom. Thoreau’s journal for this date in 1860: he eats blueberries and studies the colors of the leaves of maples and oaks now, contrasting the light undersides with the darker tops. “There is a great deal of life in this landscape,” he comments, “seeing how the wind alters the aspect of the tree lines over and over again.”

2009: After hard rain today, the bamboo is bent over, the artichokes are sagging, the daylilies are bedraggled. A shower of black walnut leaves came down from Mateo’s tree as I walked along beside the chicory. In the alley, the first tall coneflowers have opened, the winterberries are becoming prominent.

2010: The heat wave continues under the full moon, tropical storm coming ashore in the Gulf. One monarch and one polygonia butterfly in the butterfly bush this afternoon, and all the day filled with bright tiger swallowtails and red admirals. This evening, the katydids started singing at 8:20.

2012: Only four lily plants this morning, and only four blossoms in all. A spicebush swallowtail, two male tiger swallowtails and a new monarch in the garden this morning and afternoon, assorted skippers and cabbage whites and hummingbird moths. Sparrow fledglings continue begging. Robin vespers along North High Street, field crickets throughout my walk.

2013: At 5:15, fog, strong cardinal song, sparrows loud and steady, one melodious warbling bird on Stafford Street, only an occasional robin call, steady metallic grating of thrips or ground crickets. No doves. One screech owl heard at 5:30, then the street was mostly quiet. A skipper at the monarda at 7:45. More skippers and cabbage whites and hummingbird moths through the day. Two male tiger swallowtails in the afternoon. Only fourteen lilies in bloom, down by a third from yesterday. Mid-season hostas fading quickly now, flowers to the top of their stems. Joe Pye weed in full violet bloom. Along the west edge of the property, the giant yellow-green hostas are flowering.

2014: Twenty-four lilies in bloom this morning. In the afternoon, I went to John Bryan Park, walked a little ways on the Cincinnati-Pittsburgh Trail, a polydamus swallowtail seen at the trailhead. Hickory nuts on the path. Leafcup, hobblebush, heal-all, white-flowered Joe Pye Weed, tall bellflower in bloom. A white fuzzy caterpillar noticed on the way back, probably the caterpillar of the banded tussock moth, Halysidota tessellaris. Here and there, jumpseed is forming flower buds – as well as at home.

2015: Twenty-two lily plants in bloom this morning. A patch of resurrection lilies in full flower along Elm Street across from the school. False buckwheat budding at Peggy’s. Tonight, the katydids are chanting beyond Dayton Street, the first time I’ve heard them this summer.

2016: Seven lily plants, nine blossoms today. Four sightings of male tiger swallowtails this morning in the garden and on Davis Street, the first of the summer, a first hatch in the neighborhood. And at the same time, two golden fold-wing butterflies in randori. And oppressive heat all across the central and eastern pats of the country.

2017: Eleven lily blossoms, six plants. Last year’s fold-wing skipper and the appearance of swallowtails complements yesterday’s sightings. Then today, while I was having a drink on the back porch: one fold-wing skipper, one silver-spotted skipper, one giant swallowtail and even a monarch came bay. Thanks to several storms, an Osage fruit, baseball size, on the sidewalk, black walnuts mostly full size lying all about. More rain in the evening, the July 23 cool front arriving exactly on schedule. I tied up more castor bean plants. Weeds so easy to pull in the soggy soil. Milkweed pods big and fat.

2018: With Jill on the back porch, mosquitoes absent, no wind, temperature 63: The first cardinal sang as the tree frogs were buzzing at 4:45 this morning, and then cardinals from all around joined in and created a continuous chorus for a little more than half an hour. I listed for robins and doves and even sparrows to come in later, but there was little song in the yard after 5:20. The hummingbird was at the feeder, however, as soon as there was any light at all, when the color was returning and the zinnias appeared out of the darkness one by one in the circle garden. A few robin calls at 5:55, soft bursts of peeping. Then doves began to sing at 6:00. Thirty-nine lily blossoms today, and the first jumpseed flowers emerged. A giant swallowtail in the zinnias in the middle of the afternoon. A monarch in the blooming cup plant at the college. The yard’s katydids started calling at 8:14 this evening, their chants adding to the din of the tree crickets filling the night.

2019: One hundred thirty-four day lily blossoms today, 24 ditch lilies. Monarchs, skippers, a hummingbird moth, a silvery checkerspot, an Eastern black, and male tiger swallowtails in the flower garden today. Finally, a high only in the 70s, an early morning in the 50s as the July 21-3 cool wave arrives on schedule! Hummingbirds very active this morning.

2020: Lily count up from yesterday: 95 day lily, 18 ditch lily blossoms. Rain and mild. Zinnias and canna lilies countering the loss of lilies, but the field of marigolds I planted just a little later than the zinnias has only one bud so far. Two silver-spotted skippers, two checkerspots, three or four cabbage white butterflies this afternoon. At the pond, horse nettle, the first burdock and early false buckwheat in bloom. Tropical storm Gonzalo heading to skirt the northern South American coast.

with golden calm the woodlands round.