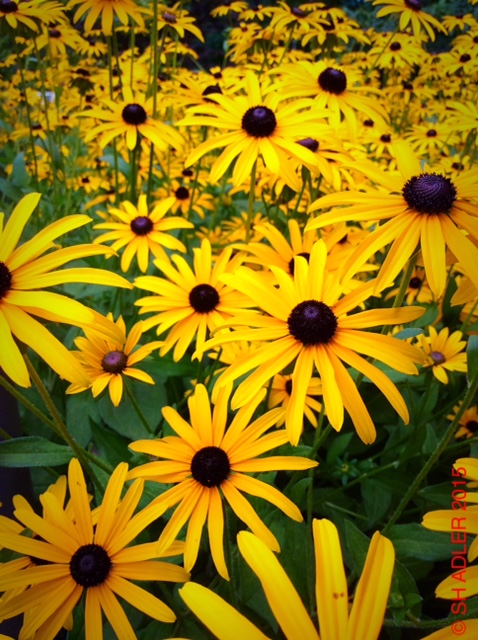 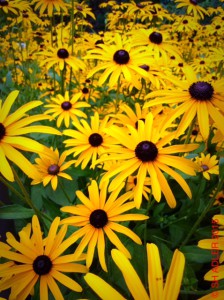 How he hangs upon the flower.

As the third cold wave of the month moves out over the Atlantic Ocean, oppressive conditions are common on the 25th in Yellow Springs and the lower Midwest. Highs reach 90 on 45 percent of all the afternoons. Eighties take up the other 55 percent. Showers fall 35 percent of the years, but the sun shines at least eight years in ten.

After the 25th of July, a subtle change takes place in weather history statistics: the chances of a high in the 80s or 90s falls slightly from 90 percent down to 75 percent. That shift is the one of the first measurable temperature signals that summer has begun to unravel.

Sunshine remains the rule for this week of the month, with three out of four days bringing at least a partial break in the clouds. Rainfall typically tapers off as July comes to a close, the chance of precipitation declining from 35 percent on the 24th down to just 20 percent on the 30th and 31st.

Tobacco topping often begins today in northern Kentucky as the first purple blossoms open on the tall ironweed. Blackberries and blueberries are ripe or ripening throughout the whole country. A few more red leaves appear on the Virginia creeper. Late Summer crickets begin their mating season. Along the Mississippi, the giant American lotus is in bloom. Throughout the country, birds come together, flocking in anticipation of autumn, their fledglings still begging for food. On the East Coast, shorebirds move south, often stopping to rest on North Carolina’s outer banks. In the honeysuckles of the Ohio Valley, adult robins teach their young migration calls.

And thrusts the Scorpion with his bended bow.

In the late evenings of Deep Summer, the teapot-like star formation of Libra lies in the south, followed by Scorpius and its red center, Antares. Sagittarius, the Archer, follows the Scorpion in the southeast. Above the Archer, the Milky Way sweeps up toward Cassiopeia in the north. The Big Dipper is moving into the far northwest along the northern horizon after midnight. Pegasus, outrider of October, fills the east.

1987: I was sitting on the front porch when the sun was rising, and impatiens seed pods were popping in the front garden. It was so quiet I could hear the seeds falling to the ground.

1993: A yellow swallowtail, a black swallowtail, and an orange fritillary in the back yard today, and a monarch in the east garden. The first white phlox opened at dawn in the south garden, by three in the afternoon in the north garden.

1995: Katydids heard down the block at about eleven o’clock tonight.

1999: Some pieces of the summer seem to be accelerating with the high temperatures of the past month. Blackberries are black a little early, and ragweed has come in ahead of schedule. In our garden pond, the three-petaled flowers of the arrowhead opened overnight, ten days before they did last year. The yellow coneflowers, rudbeckia speciosa, are a week or so ahead of schedule. The August Moon hosta are almost done blooming. The zinnias and the Shasta daisies I planted from seed are finally blossoming, bright oranges and reds joining the white phlox and the pinks of the petunias.

The lilies are almost over now. July tent caterpillars hang from the apple tree. The cabbage butterflies cluster at the purple loosestrife, up to a dozen at once, joined by the bees and a tagalong spotted skipper. The dragonflies weave back and forth, a giant black and white skimmer, three or flour big blue-tailed skimmers, a few needle thin bluets or short-tailed damselflies too. The hummingbirds visit the rose of Sharon.

I almost killed a dark woolly bear caterpillar on the way to Xenia on the 21st. The first monarch butterfly came to the garden yesterday. The young daddy longlegs are growing up, have doubled in size over the past couple of weeks. The cricket hunters, long thin black wasps, started coming to the pond’s edge, scouting for their food that will sing this week. The resurrection lilies should be coming up in a day or so.

2003: Cardinals strong at 5:00 a.m. I went fishing again with John at the Clarence Brown Reservoir. Thirteen small catfish caught in the same location between 10:15 a.m. and about 5:30 p.m., the activity following a fractal pattern of flurries of biting, then quiet, then more biting. On the way to the reservoir, we saw two monarchs flying south. While we were fishing, two more came by, heading across the water south. One tiger swallowtail seen in the garden.

2004: The robin calls have changed over the past week or so; now they have become migrating calls, insistent peeping. The weather has been atypically cool the past two days, foretaste of fall.

2005: The July heat wave continues, cicadas screaming all day. The daylilies and mallow are suddenly running out of blooms, the purple coneflowers weakening, the achillea blackening. The northwest garden takes on a scrubby appearance, spent lilies and weeds dominating. Hollyhocks have fallen over, their flowers at the top of their stalks.

The pickerel plant still puts out its three-petaled blossoms in the afternoon. Joe Pye weed is bright purple, and the first butterfly bush has started to come in. The pale green Sum and Substance hosta is full, as are the bicolors along the north wall. The other midseason varieties, however, are losing their blossoms. At about 8:30 this evening along Limestone Street, I heard the first katydids of the summer. Whistling crickets were loud everywhere for the first time, too.

2007: Robins and cardinals still strong at 5:00 ! Tat called last night from Madison, asking about cutting back her giant monardas, which are coming to the end of their bloom. No rain there, she said, since May, lawns all brown. Here, the latest crop report says the state’s topsoil is still short on 60 percent of the acreage.

2008: Cardinals woke me up at 4:30 this morning. Photos taken of the north gardens, with lilies and hostas late but very colorful and dense. Thoreau on this date in 1860 notes a few last cranberries in bloom, “though berries are 1/2 grown.”

2009: Thunderstorm before dawn. Doves and cardinals at 7:30 this morning when I walked Bella. Mrs. Timberlake’s orange Turk’s cap lilies are in full bloom. Twenty-four lily plants in bloom in our yard. Cool and cloudy throughout much of the day.

2010: A flurry of yellow black walnut leaves came down onto the street in the breeze when Bella and I were walking toward the alley this morning. All day, swallowtails continued to brighten the butterfly bush.

2011: Cardinals singing loud through the neighborhood when I got up at 5:15 ; they sang until 5:35. Sparrow fledgling being fed by a parent at the feeder this morning. Only ten varieties of lilies in bloom, down from almost thirty, two weeks ago. A spined micrathena spider guarded the back alcove when I went out to dump the garbage. Cicadas and crickets between 7:00 and 7:15 p.m., katydids starting at 8:30.

2012: Robin chorus continues, full song at 5:00, some cardinals. At about 8:30, boisterous cicadas, robins and cardinals. Some tree and field crickets. Six lilies blooming today, ragweed heading up near Lawson Place, asters getting ready to bud, and near the front gate, the first jump seed flower has opened.

2013: A cool wave has settled in, the barometer finally past 30.10. Three male tiger swallowtails seen throughout the day, one Eastern Black male, and two female tiger swallowtails in randori around the males. More in the afternoon, the best day so far for butterflies. Milkweed pods along Dayton and High streets are about an inch long. A murmuration of starlings seen on the way back from the airport this evening. Tonight, katydids heard for the first time, and the neighborhood full of screaming crickets for the first time, too: two levels, one lower static, the other higher almost like the whistling crickets.

2014: Like last year on this day, a cool wave has brought lows into the 50s, highs only in the 70s, lots of sun. Bittersweet berries and black walnuts are full size in the alley, and the knotweed there is in bloom.

Twenty-five lily plants still blooming in the garden. Monardas declining quickly, becoming dull and ragged. Most of the mid-season hostas are done, and I have started to cut back the stalks. Last night an adolescent raccoon tipped over the top of the birdbath and got trapped underneath it. A very confused beast when I freed him.

2015: My sister Tat in Wisconsin says that she has seen lots of monarch butterflies lately, four at one time in her front garden, many along the bike path. And the fireflies: “thousands of them like falling stars.” Today in the sun at home, a giant swallowtail, a male tiger swallowtail, two black swallowtails, a large female tiger, the most in one day so far. Hummingbirds in the zinnias. Nineteen lily plants in bloom. Reading last year’s note about the raccoon and the birdbath: something tipped over the birdbath last week, breaking it in half.

2016: Five lily plants in bloom, five blossoms. A male tiger swallowtail flew through the circle garden about 10:00 a.m. On Jill’s property, a large migration of ants has taken place over several days, ants carrying eggs and scouting, moving from west to east.

2018: Cool and sunny. Thirty lily blossoms this morning. From Madison, Tat reports full blooming monarda and Joe Pye, and, for the first time all summer (and in years), an abundance of baby rabbits hopping around the area where she walks Santi, her dog. Two monarchs seen at the Agraria farm this evening. Almost no flowers blooming there, although August and September should be full of goldenrod, small-flowered aster, touch-me-not and horseweed blossoms. I heard the first katydids at 8:12 this evening, seven minutes after sundown.

2019: A third morning in the 50s, but the heat grows throughout the day. Seventy day lily blossoms, eleven ditch lilies. Monarchs, tiger swallowtails, cabbage whites, a checkerspot. This evening, katydids, tree crickets and, for the first time, “whistling” crickets.

The way to find the real “world” is not merely to measure and observe what is outside us, but to discover our own inner ground. For that is where the world is, first of all: in my deepest self…. It is a living and self-creating mystery of which I am myself a part, to which I am myself my own unique door.