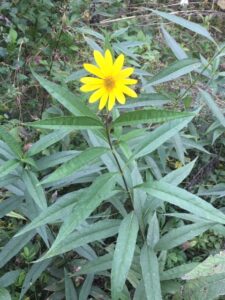 The spring comes like a tide running against a strong wind; it is ever beaten back, but ever gaining ground, with now and then a mad “push upon the land” as if to overcome its antagonist at one blow. The cold from the north encroaches upon us in about the same fashion. In September or early October it usually makes a big stride forward… but it is presently beaten back again, and the genial warmth repossess the land. Before long, however, the cold returns to the charge with augmented forces and gains much ground.

Today marks another pivot point for autumn: This is the first time since May 21st that there is a 25 percent chance of highs in the 50s. Temperatures warm to the 60s another 25 percent of the days, to the 70s thirty percent, and to the 80s twenty percent. Chances of rain increase over those for the 26th: Three days in ten are wet. Skies are totally overcast 15 percent of the time. There is a 20 percent chance of light frost this morning.

Water willows turn yellow in the river shallows as Early Fall deepens. In the sloughs, arrowhead is brittle. The wildflowers on stump habitats have disappeared. The earliest milkweed pods are opening. All the thistles have gone to seed. Wingstem has blackened with age or frost. Brome is white, burdock brown. Japanese beetles can still be mating, but they are usually down to a fraction of their summer numbers. Chiggers and mosquitoes disappear from the garden if the weather has been cold.

1987: About a fourth of the goldenrod is fading. Ashes: gentle peak of color. Maples turning more now. More raccoons and opossums killed along the roads. Beggarticks fading. Crickets strong day and night.

1988: Geese in the cutover cornfields around town.

1989: 6:20 a.m. Outside the back door, robin migrating song from all sides. To Caesar Creek, 60 degrees, clear, wind, barometer high at 30.40. Huge catfish gets away near far hole. The lake, two feet below its early- summer level, has made my cove just barely accessible. Learned from a husband and wife that the white bass would be hitting soon, following the shad up into the inlets. The bass came in last year the 3rd of October, the couple said. They gave me hooks, a yellow rubber worm, and live minnows.

Now the leaves are turning. The shift is underway. The gold is becoming more than just a suggestion; it is really there all across the shore. Goldenrod full to fading, asters strong, Queen Ann’s lace, chicory, and sundrops: scattered blooms here and there. The stump habitats on the water have disappeared now. Buckeyes dropping. Cicadas are quiet. Black walnut leaves, which I think held later than usual, are almost all gone now, fruit holding in clusters to the bare branches. Along the highway south, the artichokes have disappeared. One patch of milkweed has burst open on the Indian mound island.

1990: South Glen: Grackles up on the hills; flocks have been everywhere today, erratically zooming across the fields, back and forth, cackling and chirping, drowning out the crickets. Hickory nuts broken and scattered by the squirrels. Much of the goldenrod here is gone. Vervain is old and worn. Tree line still forest green, with only an occasional golden maple. One milkweed pod found open. Thistles all to seed. Mosquitoes still bite. One monarch butterfly. One autumn violet. Most Queen Anne’s lace is brown. Virginia Creeper creates veins of red in the tree line.

1991: South Glen: Hickory becoming gold like the ashes. Poison ivy mostly violet or brown. Sumacs are deep red. Goldenrod mostly rusted. Wingstem blackened with age. Brome is white. Asters hold. One bellflower by the bridge. Zigzag goldenrod still all right. In town, the maple at High and Limestone is a fourth gold. Blue jays and crows loud this afternoon. A cabbage butterfly in the broccoli. Yellow jackets every few minute drinking at the birdbath. I saw a monarch chasing a locust leaf. Pokeweed stem, heavy red, fat, broken. The hollyhocks have all their winter foliage now, basal leaves that will hold until April and new growth.

1992: Gourds cut today, set on the picnic table to dry. The volunteer pumpkin was taken out of the garden last Sunday, put up on the porch for October.

1997: The last showy coneflower in the south garden is finally gone. Japanese beetles still here and mating, although their numbers are dwindling. Bed of mums planted along the west end of the pond. This morning at 6:15 I heard a titmouse, a cardinal, a wren, and a flock of crows – the crows circled the yard, coming in to look at me while I was standing on the back landing. Yesterday, cicadas were loud in the cool late afternoon. They were silent today.

1999: Soft morning, so quiet before dawn, Venus rising behind Orion, one or two crickets, no wind. Crows at sunrise. Cardinal at 8:17 a.m. In the Little Miami River, the water willows are yellow now, the leafturn of the river bed. In the pond, the domestic willows follow suit, the arrowhead now becoming brittle and brown.

2000: Corn and bean fields all dry and brown, but few have been harvested. Definite red tone increasing along some tree lines, the late September shift of the ashes. Some goldenrod stands have turned, but there are patches of yellow sundrops in full bloom. Virgin’s bower behind the grocery store has been done about a week now. Only two rudbeckias left at Susi’s. At 6:45 p.m., the screech owl called three times.

2002: Kelleys Island, Lake Erie: Most leafturn has not begun. Some yellowing taking place on the ashes, some pink on the dogwoods. Only a few cottonwoods bare here. False boneset gone to seed, several heads picked for seed.

2004: The false boneset I picked two years ago on Kelleys Island has just finished blooming here in the north garden. The pink stonecrop is completely done, the red still holding. The sky, clear at 4:30 this morning, now is completely overcast, the outer edge of Hurricane Jeanne’s southeastern spin reaching southwest Ohio. The road south to Washington Court House showed none of the leafturn I saw yesterday west of Yellow Springs. Harvest, however, is underway throughout the area, record crops of corn and soybeans coming in.

2008: Gethsemani: The courtyard wildflowers are gone this year, only fragments of purple loosestrife, one sundrop, one orange jewelweed, one chicory, not one of the false white snakeroot the official identification of which has bedeviled me for years. Black stalks of mullein and teasel. But the chestnuts are still there, some old and fallen, some green and ready. Yellow poplars all around are spotted with gold. Bluebirds in the garden walk, a pileated crying then moving west overhead, crows and jays all day. Out in the hills, hickory nuts down, pawpaw foliage golden, not a single fruit, tarnished thorny greenbrier, sassafras deep red, late ironweed, fields of new pencil flowers, Stylosanthese biflora, and a wild garden of mistflower, a small violet Joe Pye, Eupatorium coelestinum.

2010: Overcast and intermittent light rain this morning. Crows slept in until 6:15.

2011: Cool and partly cloudy today, only a few cabbage whites seen in the yard, and no hummingbirds. Tonight brought a return of several katydids to the neighborhood. And the cricket chorus was loud and varied, chirps of the field crickets, harsh grating of what I believe are tree crickets, and tremulous wavering of other crickets. Occasionally, the ghostly call of the whistling cricket.

2012: High static of tree crickets this soft, mild morning. Heard the frog croak once before daylight. A short cardinal chirp at 6:20 a.m., crows for just a few moments at 6:52. A huge orb-weaver, its web – attached to the roof to the west and to the honeysuckles to the east – shining from the early rain, lay above the stonecrop. The white mums and the yellow mums are completely open in the north garden. Six bouquets of zinnias and a few purple dahlias picked for the house and porch.

2013: Crows at 6:20 this morning, a robin peeping as I walked Bella around 9:00. Intense sun and mild today, but no large butterflies seen, only a painted lady (Cynthia) and several cabbage whites. A hummingbird visited the zinnias in the afternoon, and I glimpsed a large fritillary at Annie’s. A short walk in Glen Helen along the Talus Trail: The canopy was completely green and intact. Short’s aster (Aster shortii) was dominant at the entrance to the trail. Deeper in the woods, more of the same, plus zigzag goldenrod (Solidago flexicaulis) and blue-stemmed or wreath goldenrod (Solidago caesia). Green papery seedpods of the American bladdernut (Staphylea trifolia) found hanging on shrubs near the path.

2014: Painted ladies and cabbage whites continue common in the zinnias, weather warm and sunny. Astilbes planted with Tat, stonecrop and a small oakleaf hydrangea transplanted with my sister Tat. At Ellis Pond, the ashes are deep purple, dogwoods red-purple.

2015: I walked in the garden before leaving for Italy, the morning soft and clear: Two monarchs visiting, blending with the tithonias.

2016: One painted lady butterfly, half a dozen cabbage whites, scattered silver-spotted skippers on this bright, mild day. At the Covered Bridge: white snakeroot the strongest; almost all the wingstem has gone to brittle seed; most ironweed is puffy and soft; the cup plants are black with age. When the sun went down over the ridge, the woods became cold, and it closed in around me; across the river where the sun still made the trees and river bright, the world seemed alive and inviting and open. Showers of locust leaves across the roads as we drove home.

2017: Two painted ladies in the morning zinnias, more in the afternoon, one yellow sulphur before supper, and two monarchs in the cosmos field at the northwest end of town. I feel everything is about counting and measuring now.

2019: At least three painted ladies and three monarchs, one skipper, one small fritillary, many cabbage whites seen in the yard in a brief walkthrough. The canna lilies, the full stonecrop, the New England asters, the castor beans, tithonias and the zinnias keep the garden strong and bright. At Ellis Pond, the bidens are breaking down, but the blue-winged dragonflies are still here. This afternoon, a hummingbird visited the feeder and explored the flowers.

2020: The whole town shading into autumn day by day. The earliest tree on the block this year is TK’s maple, turning and shedding at the corner of High and Limestone. One monarch came by this morning, to slim pickings in the flowers as powdery mildew and drought take their toll. I noticed that the virgin’s bower has disappeared from its tangle in Janet’s redbud tree and the honeysuckles. One silver-spotted skipper, a small checkerspot and three playful cabbage whites during the afternoon. On a late-afternoon drive south to The Narrows park, we entered a whole new season, full Early Fall, orange maples everywhere.

The human body is not a closed or static object, but an open, unfinished entity utterly entwined with the soils, waters, and winds that move through it—a wild creature whose life is contingent upon the multiple other lives that surround it, and the shifting flows that surge through it.