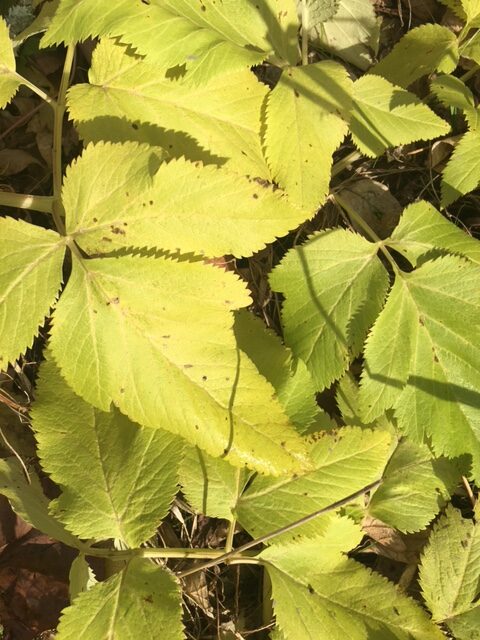 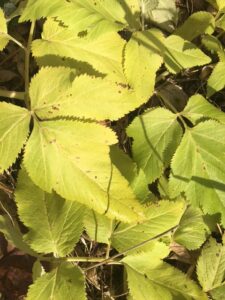 Through his iron glades

As his horn is heard sighing.

The old Yellow Springs year of sprouting, growing and producing fruit has fallen away with the leaves and the end of harvest, and the first week of Early Winter marks the beginning of a new cycle in Earth’s spin around the sun.

Seasons are local, fluid constructs that take their own direction from both meteorological as well as geographical cues. Our winter no more actually starts at December solstice than summer starts at June solstice. The “natural year” recognizes that process and gives it a shape closer to what actually occurs around us.

Even though pear trees sometimes hold out and a few honeysuckles and some privets keep their foliage, the buds of next spring are already showing, and the skunk cabbage of February and pussy willow catkins of March are poised to expand in each thaw to come.

On the early cusp of winter, Lenten roses gradually show their buds as crocus and snowdrops pierce the soft mulch and hold immune to cold beneath the snow. Sap quivers in the maples every thaw. Migrations overlap, the last sandhill cranes high over the first new bluebirds. The long nights urge the foxes to mate. Owls lay out their nests.

In all of this there is a correspondence with the new year’s movement throughout the country. Gauges of a local season are always gauges of a distant season. Knowing home, a watcher measures faraway time. A parochial thermometer not only displays alternating waves of mild or bitter weather but also counts out the days of the finite winter road that begins in the snow and ends on the warm beaches of the South. There the camellia, bougainvillea, flame vine, Hong Kong orchid tree, jasmine, and powderpuff bloom. Oranges, grapefruit, papayas, carambola and avocados ripen for picking.

1983: Sparrows chirping steadily much of the morning and afternoon. One dandelion blooming in the melting snow. One robin in the back hedge.

1984: Red-tailed hawk seen on the way to Wilberforce. In town, a few beech leaves still hold along Dayton Street, a third of the forsythia too. After last night’s hard freeze, silver maples are withering. The pears downtown thin quickly.

1986: The decadence of Late Fall stops now. The landscape is complete for the next three months. The fishing hole, Middle Prairie, and Far Prairie will remain quiet and stable, bare and predictable.

1988: The greenhouse so quiet this morning. The sun is just beginning to show against the west wall on the highest leaves of the biggest poinsettia. Robin seen in the yard today. Was it the same one I saw last week; is it wintering over in the honeysuckles?

1989: Winter colors forming all around me, blacks, browns, grays, with red berries and patches of green and yellow green along the paths.

1992: The pear foliage on Xenia Avenue holds at maybe a tenth of their leaves. Geese fly over at 12:35 p.m. South Glen this afternoon, cloudy, 40 degrees, light wind: Clover foliage keeping the paths green, with some dandelions, some plantain. Wind in the dry grass, oak leaves rustling, distant crows intermittent, no other birds for the first miles. Then the scream of a robin as though he were frightened or had been attacked.

Craneflies follow me up into High Prairie. Moss is still bright beside me, becomes the dominant green in the woods. A few red raspberry leaves at the top of the hill, an occasional bank of honeysuckle berries. Nettles, protected by wild roses, grow back in the valley, a foot tall. Top sweet gum seed balls hold. Teasel dark in the dull goldenrod fields.

Osage all yellow on the ground. Pale greens and pastels of the lichens. Then the landscape down the valley: bands of grays and browns above a sky of light stratus clouds. The trees black, pasture chartreuse: a cross section of the winter, veins of this time. On the footbridge from Jacoby, walnut hulls, shredded, staining the wood purple. Coming back, I saw a pair of flickers; they screeched then flew west off toward the river. At Sycamore Hole, three tan moths, between half an inch and an inch wingspan, struggled through the cold. I fished there: only one bite.

Today, the listing of the pieces of the last season is complete, and they become fragments of a new season, Early Winter, the first season of the New Year.

1993: Flowers of the caraway – which volunteered from seed when the ferns were planted last May – have finally turned brown.

1997: Bradford pear leaves are yellow and black, maybe three-fourths down. Neysa says the sparrows still chant in the trees outside her Xenia Avenue apartment half an hour before dawn.

2002: Leaves withered on the spirea and butterfly bush from cold in the teens this morning. The pond has started to freeze over.

2006: From Yellow Springs south to Asheville, NC. Sun and cold throughout the day. The roadside grass definitely grew greener as we drove down I-75. Some honeysuckle leaves were left on bushes near Lexington and then again at Knoxville, but no other foliage observed except on one white oak. Flocks of starlings seen off and on throughout, one flock feasting on honeysuckle berries. The full moon came up at 5:15 as the sun went down behind us.

2007: At five to eleven yesterday, Casey called on his cell. He was taking the back way to Springfield, north down Polecat Road, when he saw all the crows. “It’s a murder of crows!” he said, and I could hear the excitement in his voice. “They’re all over in the fields on either side of the road just past Ellis Pond.”

I took Bella, the family dog, jumped into the truck and headed out to watch what was going on. I could see crows all the way from Fairfield Pike, and I drove slowly down the hill into the feeding murder (a murder being the correct name for a crow flock – and not some senseless slaughter).

Bella was as fascinated as I was as we moved through the birds at maybe ten miles and hour. They were cleaning up the soybean field on the east side of Polecat and the cornfield on the west side. I had counted about a hundred starlings in Mateo’s black walnut tree earlier that morning, and I could tell there were hundreds of crows, maybe a thousand, around us. They were indifferent to traffic, and they crossed the road leisurely, floating up to let the cars go by and settling down to feed. Tame as hungry gulls at the beach or honeybees around their hive, the crows were masters of the landscape.

I thought they might stay and spend the winter near the pond (like they sometimes do a little further north of town), but they were gone the next day. Still, there was more news. Casey called again. This time he was unloading a pickup near the Antioch golf course and saw sandhill cranes flying over Glen Helen, the first flock around 11:30 in the morning, making “that long whistling sound, almost a yodel.” He went home for lunch and heard another flock “coming right over the house. Wilma saw them, too!” They were heading south, of course, flying hard, Casey said, “in front of that storm coming in from the northwest.”

2009: The gooseneck loosestrife foliage is browning now, losing its autumn reds and golds. In the alley, the thin-leafed coneflower was shriveled from last night’s frost. Jeanie reported eight buzzards in the roost along Corey Street this morning. The rest of the Osage leaves came down today, the last covering of golden foliage on the lawn by the shed. I think about my assertion the other day that the natural year starts with the beginning of December. I feel that something has turned now, that there is nothing left to hold on to, that some kind of dam has broken, and that the cold is the rush of cleansing and scrubbing and renewing.

2010: The two flowering cabbages I planted yesterday are covered with snow today.

2011: The hobblebush has lost most of its pale yellow leaves this past week, darkening the back yard.

2012: Another gentle day in the 60s: I walked Bella at 8:45 this morning, encountered a great flock of starlings, accompanied by several crows and by the sounds also of robins settling into the cottonwoods along Dayton Street and the high maples along Limestone.

2014: Last night, a vole drowned (under the waxing Marauding Mouse Moon) in the dog’s water dish! Now the December 3rd cold front settles in. Crows near 8:00 this morning. Light flurries, a few murmurations of starlings, through the day.

2016: Clouds, quiet, 35 degrees: Once again, a walk after sunrise down Limestone Street: robins peeping, starlings chattering and whistling, crows in the distance.

2017: A mild afternoon, cloudy, balanced on 60 degrees, rain due. I took the leaf netting from the pond, and the fish slowly, almost indifferently rose to eat the handful of food I gave them.

2019: Sunny and mild today. On the pond, the water was deep blue, speckled with a hundred black and white geese, shining.

2020: Jenny Cowperthwaite Ruka and Liz Porter both sent me videos of sandhill cranes flying over John Bryan Park around 3:00 this afternoon. “They were flying toward the SW and then looped in circles around the river for a little while before they flew on,” wrote Liz. “It’s been years for me since I’ve seen them, and it was a thrill.”

The moon will be your Grandmother. And she will have special duties. She will give moisture to dampen the land at night. She will also move the tides. Along with the moon there will be stars. The stars help give us directions when we travel and, along with Grandmother Moon, tell us when we should begin our ceremonies.